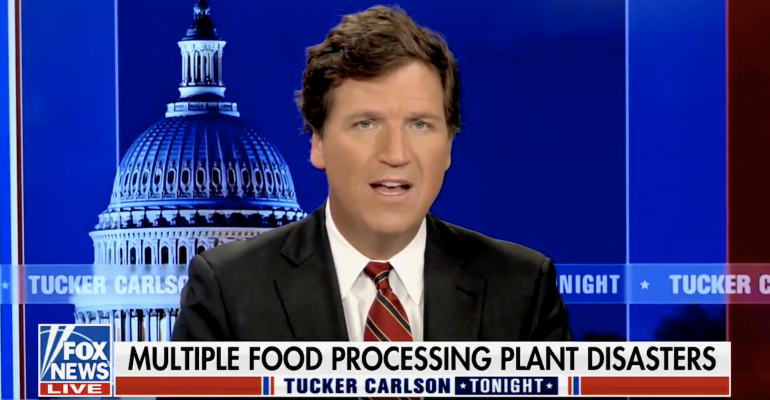 A recent segment on Fox News hosted by Tucker Carlson stoked rumors circulating on the internet that an unusually high number of fires have broken out at US food processing plants in recent months, a claim that was debunked this week by fact checker Snopes.

Social media users and a number of websites started to spread the theory in April 2022 after several major blazes at food facilities made headlines.

After reporting the crash of a small plane into a General Mills plant, Carlson addressed his viewers: “What’s going on here? The story gets weirder. Food processing plants all over the country seem to be catching fire. He cited recent blazes at an Azure Standard food distribution facility, a boiler explosion at a potato chip plant, and an onion packing site in south Texas as examples.

A guest on the Tucker Carlson Tonight show, radio host Jason Rantz – who seemingly has no background in, or significant knowledge of, industrial safety matters – described the various fires as “obviously suspicious.”

Why are so many food processing plants and warehouses catching fire all of a sudden? And as I was sitting in the studio getting ready for the report... a plane crashed at a General Mills food facility in Georgia. I discussed the issue on Tucker Carlson Tonight. pic.twitter.com/QWJ3b6j65d

“It could lead to some serious food shortages. That’s why people are wondering, well, number one, what’s going on? And you’ve got people speculating that this might be an intentional way to disrupt the food supply,” Rantz said. However, the radio personality later noted, “Police are saying that these fires are due to faulty issues with equipment, so they’re not saying this was intentional."

After learning what officials have stated about these incidents from Rantz, Carlson seems to backpaddle from the claim that the fires are unusual.  “The onus is on people who think this is a conspiracy theory to explain what is going on. What are the odds of that? I have no idea,” the host said as he concluded the segment.

Reactions to the segment varied:

Stay on this story..it will bear fruit. Ask why is Bill Gates and China buying up farmland. Ask about agenda 2030 written by world economic forum and adopted by UN 2019. Ask about effective sanctions of alleged China Zero tolerance on western nations & why on their export centers

This is really really troubling. Has me wondering where The Smoking Man is pic.twitter.com/mGQ4p5f59S

Snopes investigated the rumor and rated it as false. Looking at the examples of food processing plant fires included in various articles and social media posts on the “trend,” researchers discovered that none of the incidents mentioned were linked to suspected arson and that the majority of fires did not significantly impact production at the facilities.

“When we searched for news articles about fires at food manufacturing plants in previous years, it became abundantly clear that this was not a ‘new trend,’” Snopes’ post states.

The continued spread of the rumor in the news media and on social media is perhaps attributable to a lack of awareness of industrial fire safety issues among the general public. Those who work in food manufacturing and distribution environments are very familiar with fire and explosion risks in those types of facilities.