CSB Issues Update on Explosion and Fire at PES Refinery 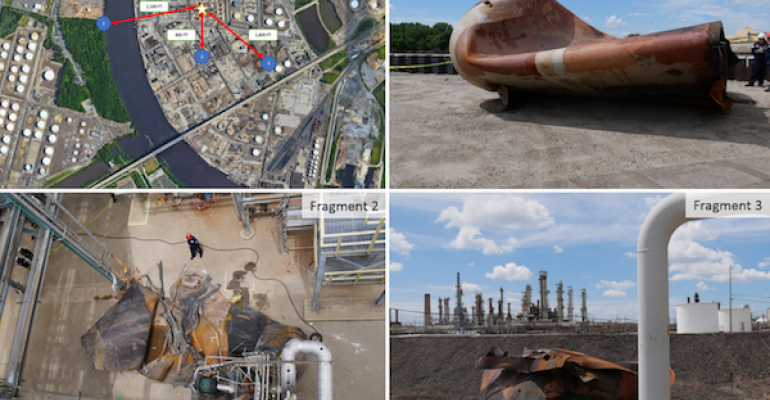 A rupture in a corroded pipe elbow was possibly the cause of a fire and explosion at the Philadelphia Energy Solutions (PES) refinery in Philadelphia on June 21 this year, according to a new factual update issued this week by the U.S. Chemical Safety Board (CSB).

After the pipe broke in the facility’s alkylation unit, some 5000 lb of hydrofluoric acid (HF) was released, and the leaking process fluid led to the formation of a large vapor cloud, according to the agency. The cloud ignited several minutes later, leading to fires and explosions.

“Since 2015, the CSB has investigated three major incidents at refineries that utilize HF for alkylation. Incidents in Superior, WI, and Torrance, CA, fortunately did not result in an HF release.” CSB Interim Executive Dr. Kristin Kulinowski said in a press release Wednesday. “That was not the case in Philadelphia. Though the main tank holding HF was not breached, HF was a component of the process fluid released from the alkylation unit. We are lucky there were no serious injuries or fatalities.”

According to the new factual update, investigators found that the piping corroded from hydrofluoric acid in the process fluid, causing the elbow to rupture faster than pipes located elsewhere in the process.

While PES performed occasional inspections of piping in the unit to examine the rate of corrosion, the elbow involved in the incident was not monitored.

The investigation also found that a secondary event occurred within the refinery as a V-1 Treater Feed Surge Drum in the facility ruptured. A 38,000 lb piece of the vessel was launched across the Schuylkill River and two other fragments were projected into the facility.

“Corrosion is not a new issue for the CSB. In its prior investigation of a 2012 Chevron Refinery fire, we determined that corrosion caused the rupture of a piping component,” CSB Supervisory Investigator Lauren Grim said in a statement. “Similarly, the 2009 Silver Eagle refinery fire was also caused by the failure of piping that had thinned due to corrosion.”