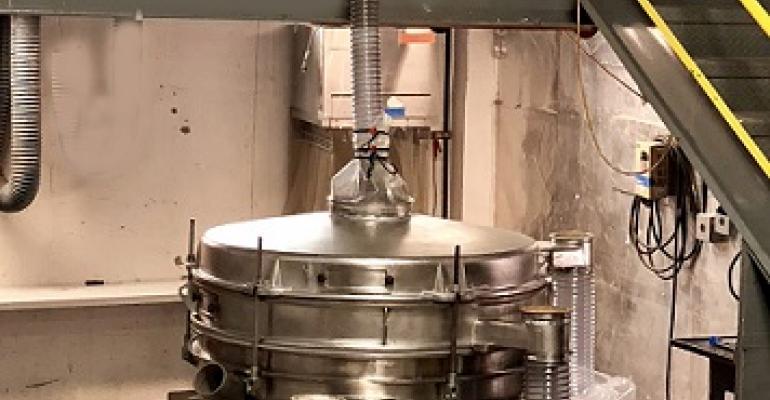 A long-time customer came to Elcan Industries Inc. asking if Elcan could sieve its metal powder at 44 micron and limit the amount of undersize in the product fraction to 2.5%. Spherical metal powder is extremely complicated to sieve and having only 2.5% fines left in the product on a 44um spec is not an easy task on any powder. Regardless, Elcan told the customer to send the powder and that a solution would be found.

Upon receiving the powder, Elcan realized that these particles were not shaped like any metal powder they had seen before. They had a very porous construction and almost looked like individual pieces of coral or sponge. They realized that this was not a powder that had been atomized. Different atomization methods produce different particle shapes, but this material didn’t resemble anything they had seen. Elcan came to find out that the material had instead been crushed and milled, resulting in a very wide particle size distribution with many irregular shapes.

Elcan tried everything they could on their advanced sieving systems and couldn’t reach the spec. It looked like a failure. Either there were too many fines in the oversize and product fractions, or there was too much oversize in the product fraction. It was extremely frustrating.

Ready to tell the customer that the spec they wanted was not achievable, Elcan decided to go back to screening basics. Since its inception in 1993, Elcan has always held a line of Minox tumbler screeners. As time went on, however, Elcan began to move away from the finesse approach of the Minox and focused on selling high-energy screeners, capable of fines removals down to 10 microns.

Elcan knew the customer was using a ROTAP to measure the results and were against this because ROTAPs do not efficiently translate to high-energy screeners. They noticed that the powder was jumping too much on the high-energy systems and then would discharge out. The powder that came off the top was clearly oversized, but upon testing on the ROTAP, it read as undersized. Elcan quickly realized that in the ROTAP machine, the particles sat on the sieve for a period of time and the consistent, gentle motion of this machine allowed these angular and high-aspect particles to stand up and slide through the screen hole.

Elcan decided the best next step would be to employ a finesse approach that mimicked the ROTAP machine. Standard Vibratory screeners struggle mightily below 100 microns and the rate they got would not be economically viable for their tolling operation. They set up a Minox tumbler screener at 44 microns and began experimenting with it to see what would work best. The Minox machine has multiple unique screen-cleaning devices so testing went back and forth, inching closer and closer to the spec. Eventually it was achieved. Using a Minox tumbler screener, with brush arms on the lower deck and the top deck, Elcan finally began to see positive results.

The out of spec began to fall rapidly, but it still wasn’t where it needed to be. Using its 25 years of screening experience, Elcan was able to adjust the throw and the residence time on the screen. A couple tweaks to the motion and a perfect combination was finally found. That was a year ago. Since then, Elcan has been successfully producing product grade powder at a 2.5 % spec on a daily basis. The customer was able to deliver a high-quality powder to its end user, and Elcan was able to develop a new method for sieving irregularly shaped metal powders, satisfying its customer’s lofty requests.

In addition to offering advanced screening equipment, Elcan has a large toll manufacturing facility in and does companies and also do extensive testing for companies worldwide. For more information, call 800-283-5226 or visit elcanindustries.com.