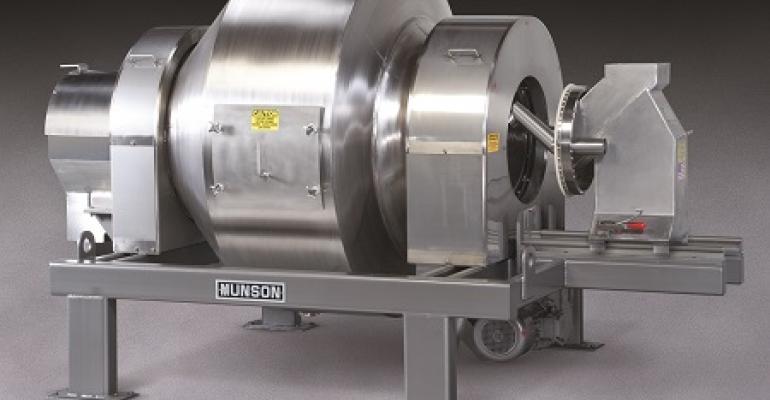 With a batch capacity of 140 cu ft, the rotary batch mixer at NuTech Biosciences has doubled output of nutritional feed supplements.

Founded in 2010, NuTech Biosciences Inc. manufactures nutritional supplements for the animal feed industry. Most are chelated minerals such as iron and copper, according to company president and founder PV Reddy, DVM, Ph.D. Chelating is a process whereby organic materials such as amino acids react with minerals to produce compounds that make the minerals more easily absorbed by the animals.

Other products provide different nutrients, individually or in combination, for specific uses, such as supporting nutrition in pregnant dairy cows during the last weeks before calving.

Improving its mixing operation enabled the company to double production. "We purchased a rotary batch mixer from Munson in 2014 to increase production capacity," Reddy said. "Although the mixer has a three-ton capacity, we typically mix about two tons at a time. Daily throughput is about 15 tons, and 300 to 400 tons per month, depending on demand for product."

A previous one-ton drum mixer processed about 10 tons per day and 200 tons per month. Reddy says it is still in use for mixing smaller batches of product.

Concentrated Ingredients Blended with Carrier
The company specified a model 700-TH-140-MS, which has a useable batch capacity of 140 cu ft. 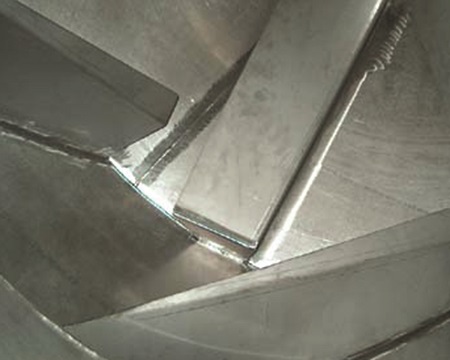 Most often, the concentrated product is mixed with a carrier, such as bran. The product concentrate typically makes up 60 to 80 percent by volume of the product-carrier mixture, Reddy explained.

NuTech produces diverse combinations, from a single component mixed with bran to blends of multiple product components. Mixtures may be wet or dry.

Ingredients are processed elsewhere in the plant and loaded manually into the mixer from bags through a stationary inlet as the mixing vessel rotates. Uniformity can be achieved in two to three minutes, but the mixer runs up to 10 minutes per batch for added insurance of uniform distribution of the concentrated ingredients.

The operator unloads the blended product into a 3-ton capacity bin that discharges into 55-lb bags. A digital scale tracks the weight of each bag. When the bag reaches the desired weight, it drops down to a stitching machine for closure.

Frequent Product Changeovers
The nature of the product line means NuTech makes frequent product changeovers, said Reddy. Cross-contamination is generally not a concern, due to the small amount of material remaining in the mixer after emptying and the fact that a very small amount of one product would not affect the performance of another. The only exception is not a performance or safety issue, but a cosmetic one (changing from a colored product mix to a white one, for example). Most of the blends are mixed with a bran carrier, which is tan or brown in color. Before mixing a white-colored blend after a bran mixture, the mixer must be thoroughly cleaned to prevent tan specks appearing in the white product. 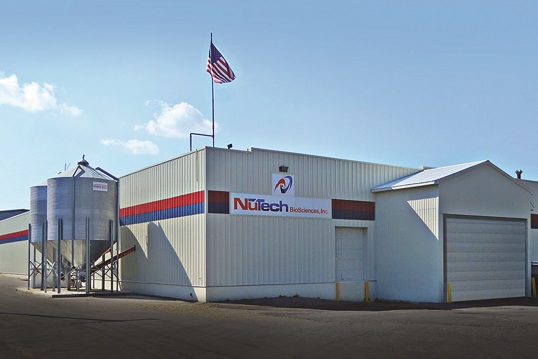 How extensive the cleaning process depends on the product. Some powdery minerals cling to the mixer’s walls, Reddy said. The cleaning process starts with loosening product from the walls of the mixer through the drum’s two clean-out doors, and takes about an hour. The mixer is cleaned weekly, or as needed when changing from a colored product blend to a white one.

Matching a Mixer to the Process
NuTech also considered agitated mixers with stationary vessels, and another type of drum mixer, but decided on the rotary batch mixer for its tumble-turn-cut-fold mixing action, its blend quality of uniform particle distribution, and its cleanability. Reddy also wanted relatively quiet operation and variable speed control. “When mixing dry material, the mixer can operate at lower speed. When adding oil to the mix, a higher speed is required,” he explained.

“An advantage of the rotary mixer is that you can prepare the batch in the mixer today and can bag it tomorrow,” Reddy said. “This is not possible with a stationary mixer, which would lack the power to re-start when full of product. If you have two hours left in the day, you can make the batch, even if there’s not enough time to both mix the batch and package it.”