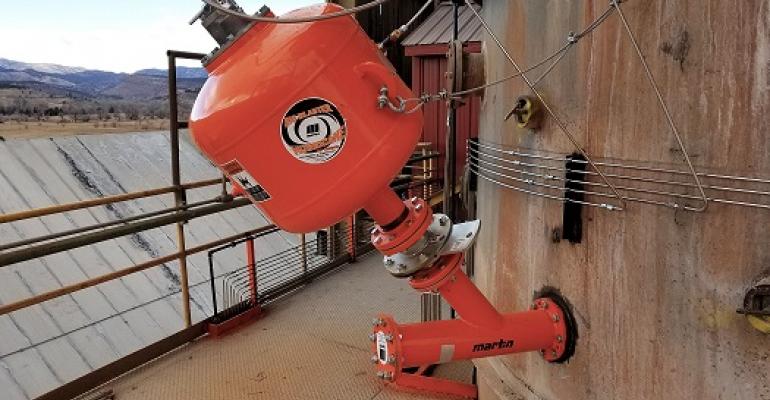 The inventor (and patent-holder) of low-pressure blasting using plant air for improved bulk material handling has announced a new technology for installing air cannons without a processing shutdown.

The system allows specially-trained technicians to mount the units on furnaces, preheaters, clinker coolers, and in other high-temperature locations while production continues uninterrupted.

The new system has been paired successfully with the firm’s Smart Nozzle series, a family of air cannon nozzle designs that can be serviced or replaced during production, without removing the cannons themselves. Currently the only technology to safely install air cannons and replace nozzles during production, the specialized equipment and process require no confined space entry. With all installation and service performed from outside the vessel or process, the Core Gate system also contributes to a safer workplace by minimizing the difficulty and hazards of installation and maintenance.

“Both of these innovations represent significant technical breakthroughs in the industry,” said global flow aids manager Brad Pronschinske. “In the past, when material accumulation problems became an issue, processors would have to either limp along until the next scheduled shutdown or endure expensive downtime to install an air cannon network. That could cost a company hundreds of thousands of dollars per day in lost production.

“Our initial advancement was engineering a nozzle design that could be safely replaced with no production stoppage,” Pronschinske continued. “Now this new technology allows us to add air cannons and nozzles to an operation while it’s in full swing, without disrupting the process.”

To install air cannons in a running process, Martin technicians first conduct a thorough assessment of the accumulation patterns and blockages to identify the proper air cannon locations, then drill through the outer wall and weld the Core Gate in place. The core drill is mounted, checked for alignment and started, with progress monitored from a safe distance as it works its way through the refractory. As soon as the drill cuts through the refractory, the drill is backed out and an isolation shield is slid into place to protect workers from the severe environment. The Smart Nozzle assembly is mounted next -- using an 8-bolt pattern that delivers excellent support -- followed by the nozzle itself.

Replacing a conventional fan nozzle on existing equipment typically requires the removal of refractory material from around the nozzle opening, usually with a pneumatic hammer from inside the vessel. The process invariably weakens the surrounding refractory and renders it more susceptible to spider-webbing and subsequent cracking. In contrast, the Martin replacement system leaves the refractory undisturbed during service, and one worker can safely perform installations or maintenance from outside the vessel. The Martin Engineering design features a smaller footprint than typical fan jet nozzles, delivering a larger blast pattern than pipe nozzles or standard fan jet designs.

“Now as soon as a material accumulation issue is identified, we can inspect the problem, design an air cannon layout and install the units quickly,” Pronschinske said. “As long as the blockage isn’t so severe that it completely obstructs the process flow, we can generally keep production moving while we mount the equipment for the solution.”