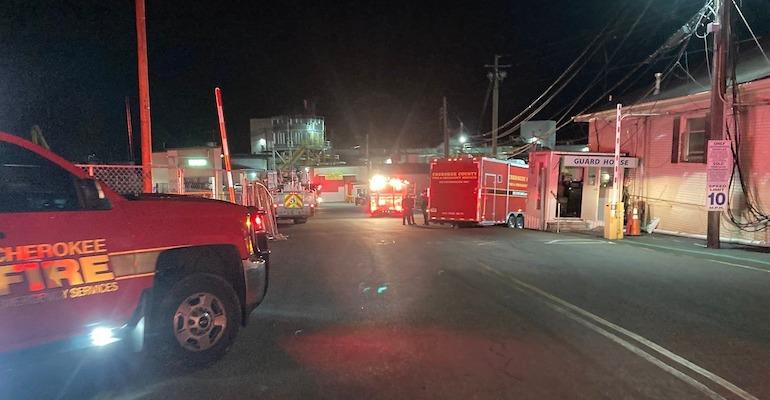 Crews were sent to the poultry processing facility in Canton, GA Wednesday night after an ammonia pipe leaked.

Emergency personnel were sent to the Pilgrim’s Pride poultry processing plant in Canton, GA Wednesday night after a pipe leaked ammonia in the facility, according to local fire officials.

Dispatched to the HAZMAT incident at the Univeter Road location around 8 p.m., a HAZMAT team discovered a broken ammonia pipe after arriving on scene, a post on the Cherokee County Fire and Emergency Services page on Facebook said.

“Approximately 42 employees ran outside to the back of the building [where] the leak occurred until help could arrive,” the fire department said. “Three of the employees were taken to area hospitals to be evaluated for mild to severe injuries.”

During the response, crews closed parts of several roadways and an interstate to restrict access to the scene.

“No other homes or other businesses other than Pilgrim’s Pride were evacuated during this time,” stated Cherokee County Fire.

Fire officials said several 911 calls were received from local residents during the incident about an ammonia smell in the air. Crews started to ventilate the plant around 10 p.m.

Pilgrim’s Pride reopened the facility Thursday after the pipe was fixed, the Atlanta Journal Constitution reported.