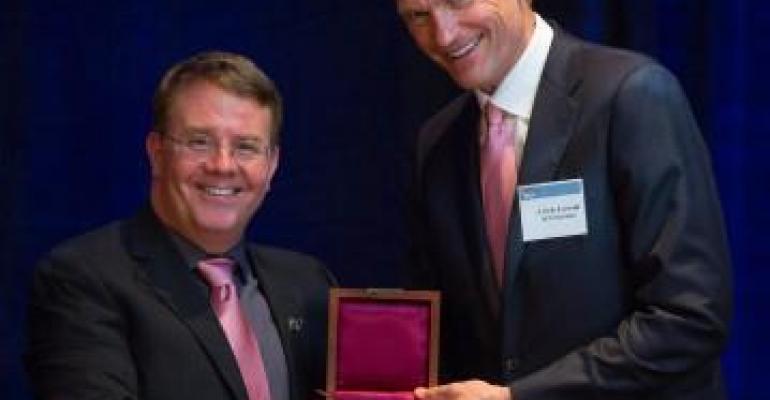 For the first time in its 108-year history, the Perkin Medal – given for “applied chemical work resulting in outstanding commercial development” – has been awarded for efforts in green chemistry.

Widely acknowledged as America’s highest honor for applied chemistry, the award was presented to Dr. John C. Warner at a dinner hosted by the Society for Chemical Industry (SCI).

Dr. Warner is regarded as one of the founders of green chemistry, co-authoring with Paul Anastas the seminal text, Green Chemistry: Theory and Practice, in which the “Twelve Principles of Green Chemistry” are originally described. He also designed and created the world’s first Green Chemistry PhD program during his time as a professor at the University of Massachusetts.

In 2004, the National Science Foundation presented Dr. Warner with the Presidential Award for Excellence in Science Mathematics and Engineering Mentorship. Together with Amy Cannon, Dr. Warner co-founded Beyond Benign, a non-profit dedicated to providing tools to teach and learn green chemistry in order to provide a critical foundation for the creation of a sustainable future.

In the late 1980s, Dr. Warner pioneered the development of a unique approach to the tailored design and synthesis of functional materials: Non-Covalent Derivatization (NCD). The NCD approach typically requires fewer processing and purification steps and less waste than traditional procedures, resulting in manufacturing cost reduction and, in many cases, superior product performance. NCD technology draws inspiration from nature using principles of self-assembly and molecular recognition.

With more than 100 patents to his name, Dr. Warner has designed a wide range of commercially viable technologies, for example in the fields of hair color restoration, asphalt rejuvenation, and pharmaceutical technologies, addressing oncology, Alzheimer’s and Parkinson’s diseases.

“We are pleased to honor Dr. Warner for his industry-proven green technologies,” said Erik Fyrwald, president and CEO of Univar Corp., and SCI America chairperson. “His work has been paramount in developing more efficient and safer technologies for business and society.”

The Warner Babcock Institute for Green Chemistry was founded in 2007 by Dr. John Warner and Jim Babcock with the goal of helping businesses achieve greater efficiencies and higher performance through more sustainable technological solutions. For more information, visit www.warnerbabcock.com.

The SCI Perkin Medal commemorates the discovery of the first synthetic dye (the so-called Perkin mauve) by Sir William Henry Perkin in 1856. This discovery was a significant step forward in organic chemistry that led to the birth of a major segment of the chemical industry. The Perkin Medal was first awarded to Sir William at a banquet held by the SCI in New York in 1906. Since then, more than 90 such awards have been given to notable scientists.

Launched in 1894, SCI America Group is part of the Society of Chemical Industry’s international organization. It provides a networking forum for chemical industry leaders, industrial scientists, and technologists to exchange new business ideas and best practices. It celebrates achievement to promote public awareness of the contributions of industrial chemistry and inspire students to enter technical careers.