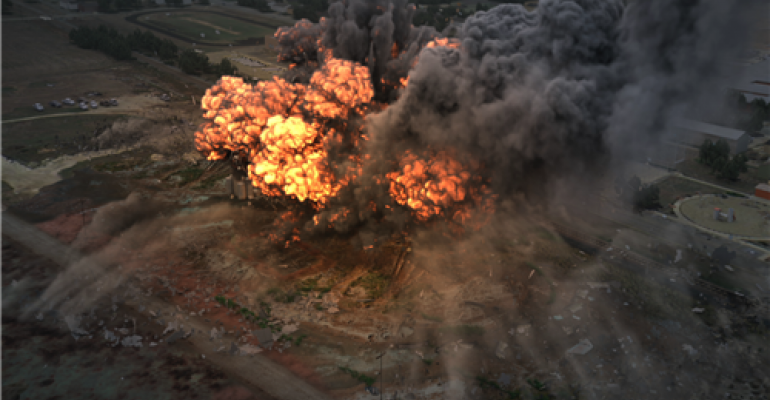 An animated rendering of the 2013 West Fertilizer plant explosion from the Chemical Safety Board.

The Bureau of Alcohol, Tobacco, and Firearms announced Wednesday that the cause of a 2013 fatal fire and explosion at the West Fertilizer plant in West, TX was an act of arson and offered a $50,000 reward for help apprehending those responsible.

“The fire has been ruled as incendiary. This means this fire was a criminal act,” said Rob Elder, ATF special agent in charge, at a press conference on Wednesday. “We have come to this conclusion through over 400 interviews, a systematic fire scene examination, considering witness observations, viewing both witness photographs and video, as well as extensive scientific testing at the ATF Fire Research Laboratory located in Maryland.”

The fire and explosion on April 17, 2013 damaged a 37 square-block area, destroyed more than 500 homes and resulted in the deaths of 15 people, including 12 firefighters, Elder said. Items of evidence were found two-and-a-half miles away from the plant. The ATF said all “reasonable, accidental, and natural fire scenarios” had been ruled out.

This was one of the bureau’s largest fire investigations ever in terms of cost, scope and man hours. Elder said more than $2 million had been spent on the investigation to rebuild portions of the West Fertilizer plant, conduct interviews, and investigate leads.

“We have never stopped investigating this fire. It is our highest priority to see that the victims of this tragedy are provided with an accurate explanation of what happened that day,” said Elder.

“While there have not been any arrests made, the 400 plus interviews that have been conducted to date have produced many leads,” Elder said. “As many of you know, this investigation has been very complex with many moving parts. We ask for your patience as we move into the next phase of this investigation.”