One of the issues of the lime pH regulation system was the excessive noise and vibration created by the unloader vibrators. The vibrators’ noise was over 100 dBa and the emitted vibrations not only shook the entire silo structure, but also compacted the dry chemical, increasing its density and created erratic unloading. The bypass connection to the feeders was not efficient and the feeder could never guarantee a continuous and accurate metering, neither meeting the new site feed rate requirements.

Overall, the feeders and the slurry tanks were not protected nor enclosed, resulting in hazardous and dusty working conditions. Most of the protection covers and lids had been removed to regularly maintain the defective and unreliable equipments, leaving moving parts of the system exposed without operator protection. The increase of power demand and plant extensions made this existing feeding and lime slurry make-up system completely obsolete and unsafe for actual regulations. 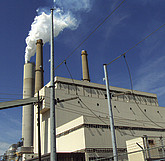 The engineering firm has worked with many power generation plants for flue gas treatment, as well as wastewater treatment facilities for pH regulation throughout the United States. The Chicago-based office servicing the North American market supplies systems for discharging, conveying, weighing, and feeding dry bulk solids for the above-mentioned industries, as well as metallurgy, mining, pharmaceutical, and many bulk handling system processes.

“At first, they only wanted a bigger volumetric screw feeder, thinking that it would solve their feeding problem,” said Patrick Esor, Sodimate general manager. “However, I told them that even if they installed a new volumetric screw feeder they wouldn’t have control of the material discharged from the silo, because the vibrators are not correlated to the feeder speed and would still cause inconsistent unloading into the system. I also told them that proper slurry mixing cannot be done in such small slurry tanks, and increasing the slurry concentration would clog their piping pretty fast. So I proposed to them that, along with the screw feeder, I would provide a complete mechanical silo discharger and a new lime slurry tank for adequate slurry concentration and feed rate. Finally, I suggested interconnecting both silos into only one slurry tank to work as a stand-by/duty process.”

The New Discharge and Feeding System

In January 2010, the discharge and feeding system arrived at the power plant where it was quickly and easily installed below one of the new silo’s cone section. The system consists of two (one per silo) arch breaker DDS 400 mechanical silo dischargers, two correlated screw feeders, one isolation injector connecting both feeders, and one slurry tank. The arch breakers provide mechanical agitation inside the silo cones, without air injection (fluidization) or vibration (bin activator or vibrators), and eliminate arching, bridging, and rat-holing phenomena, to ensure continuous material discharge to the screw feeder. The mechanical unloader can be used with large silos, big bag unloaders, and small storage hoppers.

The arch breaker has an 8-in.-diam inlet connected to the silo cone outlet flange holding a 16-in.-diam cylindrical body hopper used to maintain a constant density of the product discharged from the silo. Located at the bottom of the hopper is an opening inlet for the volumetric screw feeder; a single-speed motor mounted outside the arch breaker’s body drives the mechanical silo discharger and two sweeping arms that fill the dry chemical into the screw inlet. The 3-ft-long vertical shaft can be set to rotate from 7 to 50 rpm, depending on the product density and discharge rate. Several flexible blades mounted at intervals on the shaft extend out horizontally into the silo cone to just near the inside wall slope.

The 7-ft-long screw feeder is a 1.5-in.-diam shaftless screw (flexible) and is installed directly below the mechanical arch breaker discharger. The screw feeder’s variable-speed motor allows it to feed material from 50 to 150 lb/hr. The lime fed from the screw feeders is then dropped into the isolation injector that prevents the slurry humidity to be in contact with the hydrophone dry lime. The dry chemical is then injected into the new 500-gal slurry tank.

The PLC controls the arch breakers, screw feeders, injector, and slurry mixer operation, and is programmed to match the plant pH requirement by adjusting the speed of the feeder’s motors.

During operation, the arch breaker, injector, and slurry mixer operate at a fixed speed and the screw conveyor operates at a variable speed determined by the signal called up on the PLC. As the mechanical arch breaker rotates inside the silo cone, its flexible blades condition the material to not bridge, arch, or segregate as if it was used with vibration systems, and allows it to easily discharge from the silo into the arch breaker hopper. Since the arch breaker’s body is larger than the silo cone discharge opening, the material’s bulk density remains constant before entering the screw feeder, which helps maintain volumetric feeding accuracy.

The isolation injector is made of stainless steel with a bigger and reinforced screw and is driven by a more powerful motor. The isolation injector will turn faster and guarantee that every solidified chunk resulting from the lime and moisture chemical reaction will be conveyed into the slurry tank. This prevents lime buildup into the outlet screw feeder chute that results from snapping the augers.

The slurry tank is equipped with an agitator mixer and antivortex blades inside the cylinder. This increases the turbidity, hence reducing the slurry mixing and retention time. No electrical monitoring components are inside the tank to prevent lime coating and unreliable level reading. A float is simply connected to a counter balanced magnetic weight, where a reliable magnetic detector will read the signals for batching preparation.

There were no skid pumps installed, as it was Duke Energy’s desire to feed the lime slurry gravimetrically.

Since installing the new mechanical discharger, feeders, and slurry system, the power plant no longer has erratic discharge and accurately matches the lime slurry feed rate to their pH regulation needs.

“Improving the discharge and feed rate from the silos has given us better control of the slurry mix into the downstream water flow, which improves the pH regulation performances because we can better regulate the lime feed rate according to the pH fluctuation,” said a Duke Energy project engineer. “In addition to better discharge and feed control, the overall quality and assembly of the equipment allows the process to run without operator supervision and is completely dust free. The system was also pretty easy to install, and it took longer to dismount the old equipment than retrofit the new one. You just follow the step-by-step manual, connect the parts all together in a logical and easy-to-mount order, and you’re done.”

Visit Booth 2245 for a demonstration of this equipment.

Sodimate (Chicago, IL) is a leading company in the design, manufacture, and supply of bulk powder handling solutions. For more information, visit www.sodimate-inc.com.