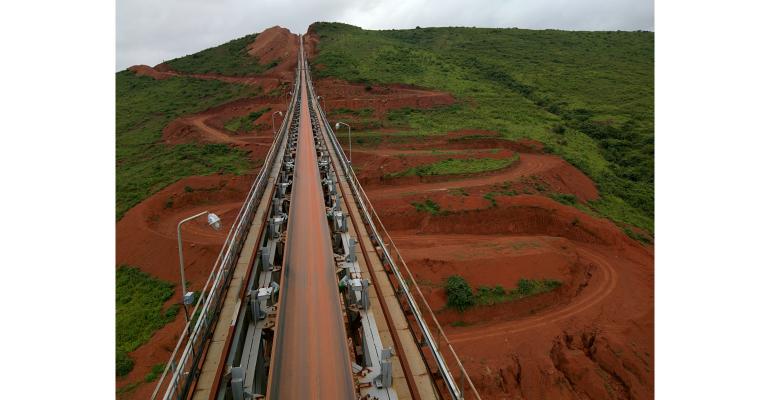 Design features and challenges overcome in designing an overland conveyor.

The successful completion of the approximately 19-km overland conveyor system for the green fields Utkal Alumina project in Tikri, Raigada, in the Orissa state of India, marked another TAKRAF milestone development for the global conveyor industry.

The contract from Utkal Alumina International Ltd (UAIL) called for an overland conveyor system to transport bauxite from the mines to a new 4.5 mtpa alumina plant. This also included the longest single-flight conveyor system to be installed to date within Indian territory.

With the best quality bauxite as its input, and tightly integrated logistics between the mines and the refinery, Utkal Alumina’s operating cost per ton of alumina is among the lowest in the world. The bauxite for Utkal Alumina is sourced entirely from the Baphlimali mines, some 16 km (aerial distance) from the plant site in the Doragurha village. Prior to being conveyed overland to the processing plant, the bauxite is crushed to a size of -150 mm, with the fixed crushing package having been provided in 2012/13 by a sister company, the then Bateman India (acquired by Tenova in 2012).

Conveying Ore from Mine to Plant

The scope of the overland conveyor project covered design, basic and detailed engineering, procurement and fabrication, right through to erection, which included civil and structural work, commissioning, performance guarantee test runs, and handover of the 2,850 tn/hr conveyor system. An intermediate transfer point and unloading station--including silos and buildings--were also supplied with complete electrical and instrumentation systems.

The system design brief called for the primary crushed bauxite ore of size -150 mm to be fed from the mine end junction house, through a chute to an overland conveyor of 14.5 km. This overland conveyor--ending at an intermediate junction house--in turn feeds an overland conveyor of 13.6 km. The shorter conveyor ends at a plant end junction house, feeding a 500-tn material surge hopper via a two-way chute. The overland system comprises 2,000 and 4,000 tensile strength steel cord conveyor belting, with a minimum belt safety factor at a steady state of >5.5, supported on a series of underslung-type idlers. These, in turn, are supported on a structural system made up of ground modules and gantries, with the overland conveyors routed partly along the ground and partly along an elevated portion. From the surge hopper, material is fed either directly to plant conveyors or to a stockpile through stockyard conveyors supplied by others. 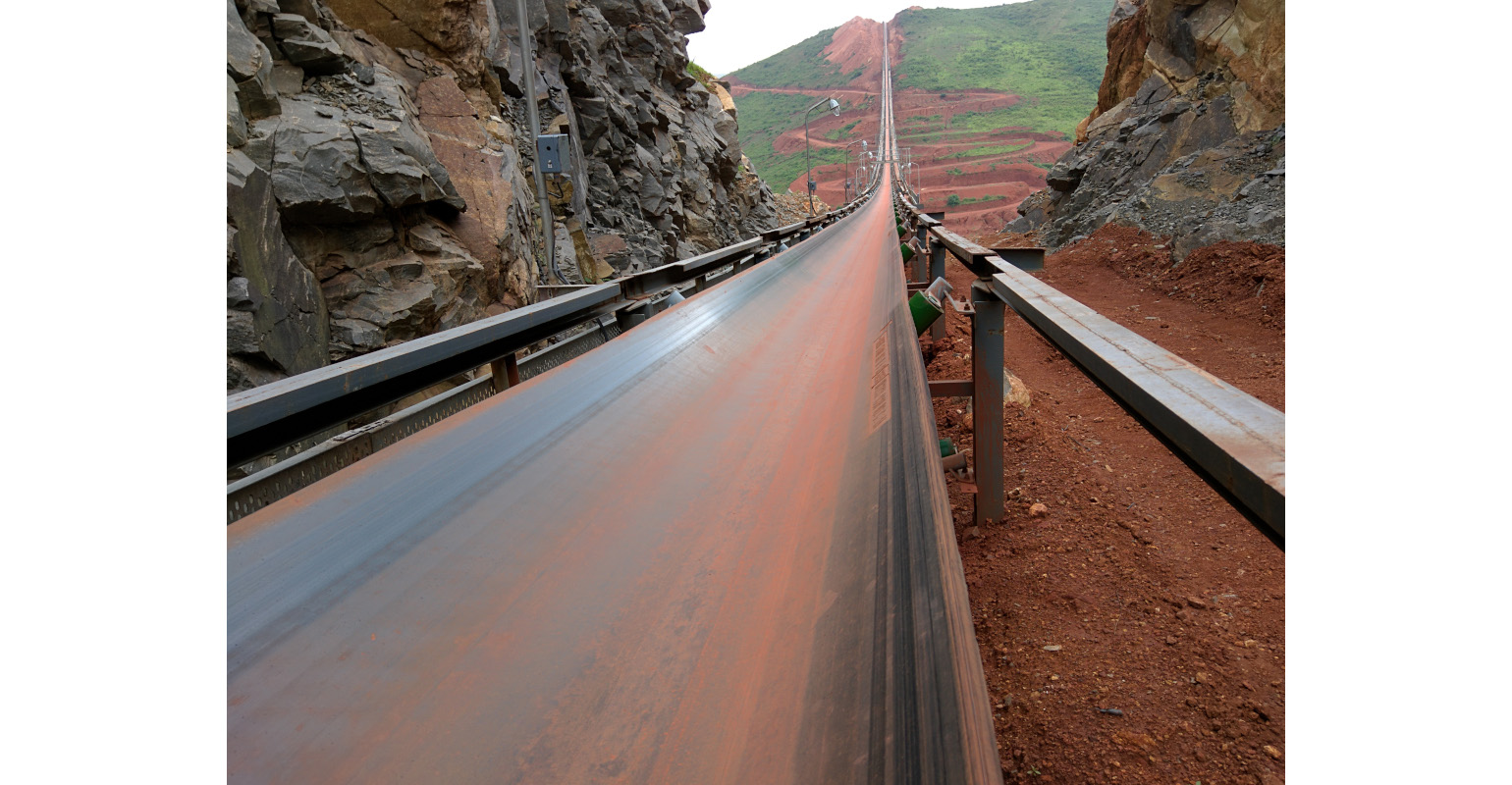 Blasting and excavating were required for creating a suitable route through the hilly region of the conveyor path. A very undulating terrain typified the path of the conveyor moving bauxite ore from the mine to the Utkal alumina plant.

The execution of the project represented a group-wide effort, drawing on the global overland conveying expertise of TAKRAF Group, with the length of the required conveyor system and the challenging topography along the conveyor path calling for state-of-the-art design and engineering. Industry-leading software was used to maximize routing and equipment utilization and specifications. The conveyor design was supported by horizontal curve analysis and dynamic analysis to optimize the long-distance conveyor power and belt tensions. Global procurement was also followed in order to optimize costs but at the same time source the most advanced and reliable components.

Initially, two technologies were considered--overland trough belt conveying and cable belt--with the client selecting the former due to its many advantages in such inhospitable and remote terrain. In addition, a major advantage of using trough belt conveying was that almost all the components and spares for trough belts are available in India, with a small percentage of imported components.

Designing for a Complex Terrain

In its final configuration, the system’s two conveyors traverse a highly undulating and complex terrain. Dropping in total by 250 m over its course from material loading to discharge, the conveyor system passes through 11 nalas (branch rivers), the Ratachuan River, one forest stretch of nearly 470 m in length, a high-voltage line crossing, 37 road crossings, a paddy field adjacent to the plant boundary with a stretch of approximately 2.5 km, eight hills, and several villages. The elevated structures were provided with cage ladders spaced at approximately 150 m, and pile foundations were provided for the river crossing and one of the downhill crossings.

The idler spacing for the straight and inclined portions of the galleries on both conveyors is 4.5 m for the carry idlers and 9 m for the return idlers, except for one section on the longer conveyor where the carry idlers are spaced at 3.5 m and the return idlers at 7 m. On both conveyors, the carry idler spacing for the horizontal curved galleries is 2.25 m; and the return idlers are spaced at 4.5 m. With an installed power of 6x850 kW and 2x850 kW, the conveyor system features six drives at the tail end and four at the head end on the longer conveyor, while the shorter conveyor has two drives at the head end only. There are two belt turn-overs on each conveyor: one at the tail end and one at the head end. Each conveyor features a fail-safe hydraulic disc brake at the tail end. A take-up winch with capstan brake arrangement has been provided at the head end of both conveyors.

The intermediate transfer point between the two conveyors is located in hilly terrain and, since the four head end drives of the longer conveyor are also located there, the conveyor drive and take-up areas are mounted on a portal steel structure. These lightweight but high strength structures provide the design flexibility to accommodate the terrain. Advanced material flowability testing and modelling was used in the design of the transfer chutes at the intermediate transfer point and the plant end junction house to minimize risks such as environmental pollution and spillage, accelerated belt wear and blockages. To facilitate maintenance, approach roads and a mine road were made available all along the conveyor length, with the cage ladders provided on the elevated structures enabling ease of access.

Erection of the conveyor system was complicated by the requirement to accommodate and minimize disturbance of the population of the various villages through which the conveyor system passes, as well as the need to blast and excavate a suitable route through the hilly region of the conveyor path. Approach roads for erection of elevated structures on the hilly terrains also had to be provided. With major equipment such as heavy cranes and excavators used for erection of the elevated structures, particularly in the challenging hilly terrain, TAKRAF India placed particular focus on safety, strictly conforming both to TAKRAF’s global promise of zero harm and to the client’s safety protocols.

Performance guarantee testing was carried out over nearly one week, with the system consistently achieving its present capacity of 1,500 tn/hr. As a result, the conveyor system could be handed over to the client in December 2016 at a special event where celebratory Pooja rituals were carried out in the presence of top management of both companies.