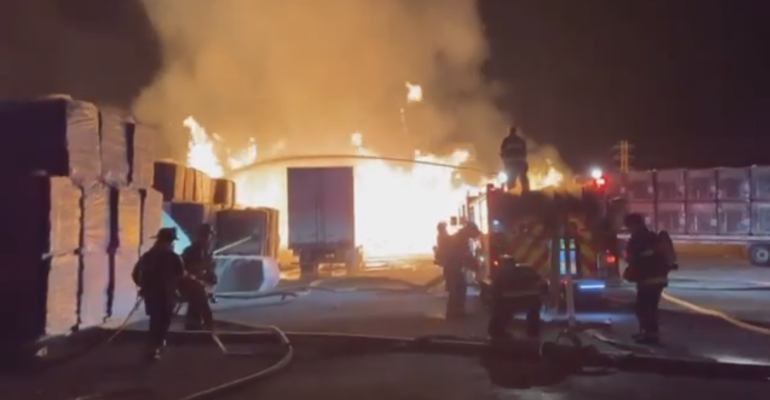 A screenshot from a video of the Georgia-Pacific plant fire posted by the Alameda County Fire Department on Facebook.
50 firefighters worked from Sunday night into Monday morning to put out the fire at the San Leandro, CA plant.

Crews worked for several hours on Sunday night to douse a two-alarm fire that broke out at the Georgia-Pacific box production plant in San Leandro, CA, local news organizations reported.

Officials issued a second alarm for the fire at 11:14 p.m. and a total of 50 firefighters responded to the Alvarado Street location, coverage by CBS News affiliate KPIX said.

The fire was extinguished by 5 a.m. Monday, according to KRON. Georgia-Pacific told the news broadcaster that the fire occurred in an outdoor area used to store finished goods.

“We appreciate the rapid response by @AlamedaCoFire to address the fire at our box plant in San Leandro,” Georgia-Pacific tweeted Monday. “Thankfully there are no injuries and the fire is out. The facility expects to start back up this morning as scheduled. Thanks to all the first responders who helped.”

Fire at The Andersons Elevator and Other Food Industry News
Sep 23, 2022