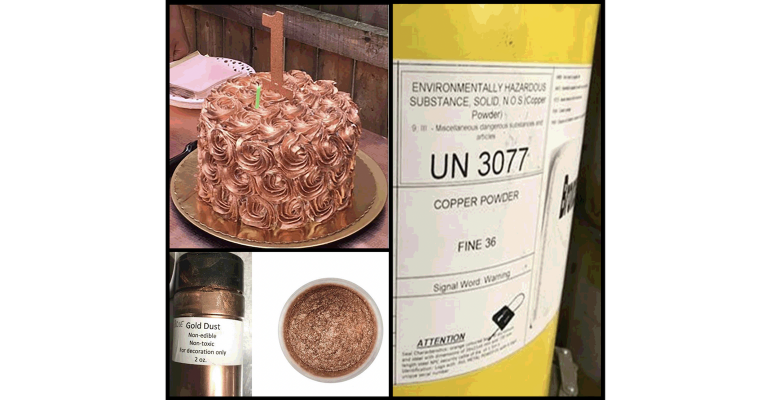 An investigation was opened after several children became ill after eating cakes decorated with the product.

A new report published by The US Centers for Disease Control and Prevention (CDC) links use of food decoration “luster dust” to heavy metal poisonings in two states over a two-year period.

Officials from the Rhode Island Department of Health (RIDOH) and Missouri Department of Health and Senior Services (DHSS) opened investigations into several cases of toxic metal poisonings in 2018 and 2019 that were linked to commercially produced and homemade cakes that were decorated with glitters and dusts known as “luster dust.”

Six children between 1 and 11 years old developed an illness after eating a cake at a birthday party in Rhode Island. An investigation revealed that the cases were associated with copper consumption.

RIDOH’s Center for Food Protection (CFP) environmental food specialists visited the bakery and put control measures into place. A food flow analysis carried out by a CDC National Environmental Assessment Reporting System (NEARS) manager helped the bakery to examine each step of its food production system and identify potential hazards. Officials found that some packages of the luster dust used in the cake frosting were marked “nonedible,” “nontoxic,” and “for decoration only.”

During the investigation, an importer identified the ingredient as a fine copper powder that was initially sold for use as a metallic pigment in consumer products. Tests of the luster dust used in the cake’s frosting showed high levels of several metals, including 22.1 mg per gram of frosting, or about 900 mg of copper per cake slice.

Missouri health officials started investigating luster dusts after a one-year-old child was found to have elevated levels of lead in their blood in 2019. Officials found that a luster dust was used to make decorative flowers for the child’s homemade birthday cake. DHSS testing indicates that the “primrose metal dust” has 250,000 ppm, or about 25%, lead. The agency later warned consumers in the state to avoid consumption of the product.

“These events indicate that increased vigilance by public health departments and further guidance to consumers and bakeries are needed to prevent unintentional poisonings,” wrote the CDC. “Labeling indicating that a product is not safe for human consumption is needed to prevent illness from inappropriate use of inedible products on foods.”