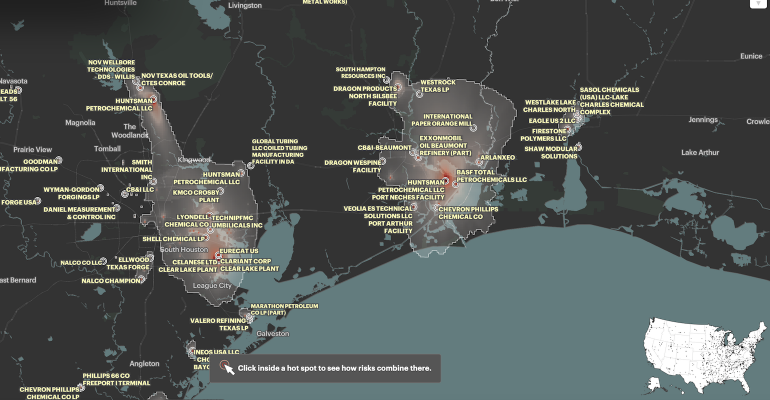 A screen shot of the ProPublica toxic hot spots map.
ProPublica used a modelling tool created by the US EPA to show how toxic chemicals emitted from facilities impact surrounding communities.

Independent nonprofit news organization ProPublica released a map this week that identifies more than 1,000 “toxic hot spots” in the United States with unsafe levels of cancer-causing chemicals in the air due to emissions from industrial facilities, including chemical plants and refineries.

Researchers examined five years of data on industrial emissions gathered by the US Environmental Protection Agency (EPA) and used a modelling tool created by the agency to create the map.

Released on November 2, the report estimates that about 250,000 Americans who reside in these “hot spots” may be exposed to levels of toxic chemicals that increase the risk of developing cancer. “Hot spots” are defined as locations where the excess cancer risk from air pollution is more than 1 in 100,000, which is lower than the EPA’s upper limit of acceptable excess cancer risk of 1 in 10,000.

The data indicates that the distribution of these hot spots is concentrated in certain areas of the country and that certain communities are more impacted by these issues than others.

“A quarter of the 20 hot spots with the highest levels of excess risk are in Texas, and almost all of them are in Southern states known for having weaker environmental regulations,” ProPublica said in an article announcing the results of their research. “Census tracts where the majority of residents are people of color experience about 40% more cancer-causing industrial air pollution on average than tracts where residents are mostly white.”

The news outlet’s analysis indicates that excess cancer risk is the highest in areas where industrial facilities are located.

On the same day that the ProPublica report was published, the EPA announced that it is proposing a new rule in the Clean Air Act to curb methane air pollution from the oil and natural gas industry. If promulgated, the agency said the rule will cut 41 million tn/yr of methane emissions between 2023 and 2035.