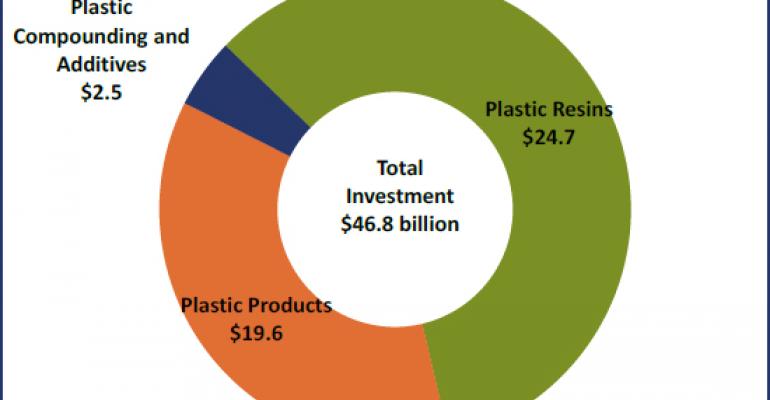 Due largely to plentiful and affordable natural gas and natural gas liquids from shale formations, U.S. jobs related to plastics manufacturing are expected to grow by 462,000 (more than 20 percent) over the next decade, reaching more than 2.7 million, according to a new report.

“The Rising Competitive Advantage of U.S. Plastics,” published by economists at the American Chemistry Council (ACC), found that the shale gas production surge has reversed the fortunes of the plastics industry, shifting the competitive advantage to the U.S., where producers mostly use raw materials derived from natural gas. In other regions, plastics makers mainly use an oil-based feedstock.

“A decade ago, the United States was among the highest-cost plastics producers,” said Steve Russell, ACC’s vice president of plastics. “Today, America is one of the most attractive places in the world to invest in plastics manufacturing. Even after recent declines in oil prices, our nation has a decisive edge.”

ACC’s report found that the U.S. plastics industry could experience investments of nearly $47 billion in new capacity to produce plastics materials and products, which are expected to create hundreds of thousands of permanent jobs up and down the supply chain over the next decade. In addition, the analysis projects nearly 97,000 temporary jobs will be created during the peak of the construction phase.

The increased supply will be consumed by plastics-intensive industries, such as automotive, building and construction, and packaging, which use modern-day plastics in part to achieve sustainability goals.

In addition, net exports (or U.S. trade surplus) of plastics are expected to triple between 2014 and 2030, growing from $6.5 billion to $21.5 billion, according to a recent report by Nexant Consulting.

“This substantial investment in new capacity is creating more high-paying jobs in the United States in this high-tech industry,” said Russell. “Plastics materials makers pay workers on average nearly $85,000, which is more than 73 percent higher than the average wage for workers across U.S. industries. Companies are ‘re-shoring’ jobs to the United States as new manufacturing is increasingly being located here at home.”

In addition to contributing to economic growth, the U.S. plastics manufacturing renaissance will supply strong, lightweight auto parts, insulation and packaging that will help industries in the U.S. and around the world to meet energy, waste, and greenhouse gas reduction targets.