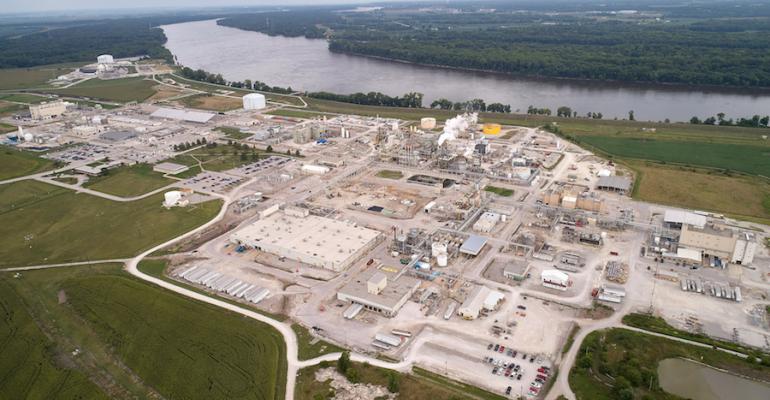 The Hannibal, MO plant where BASF will produce the new fungicide product. Image courtesy of BASF

German chemical firm BASF announced Wednesday that its plant in Hannibal, MO commenced production of a new brand fungicide, Revysol, after an investment in the “double-digit euro range” to add new manufacturing capabilities to the site.

“We are pleased with the successful start of production in Hannibal. It is a significant milestone towards bringing this highly-effective fungicide to our customers,” Markus Heldt, president of the company’s Agricultural Solutions division, said in a press release.

Revysol is poised to become the company’s “new blockbuster fungicide,” according to the company, particularly in North America. Applications for regulatory approval have been filed in 60 countries in Europe, Asia, and the Americas, covering about 40 different crops.

The plant in Hannibal is the first BASF facility across its global footprint to produce the Revysol fungicide. After the product is approved by regulators, sales of Revysol are expected to begin during the 2019-2020 season.

“We’re proud that Hannibal is the first site to produce Revysol,” Anne Berg, Vice President Manufacturing Americas in BASF’s Agricultural Solutions division, said in a statement. “This decision was based on the high level of technology and experience on the site, and is an investment in its future development that will save and create jobs.”

Revysol will be available in customized formulations when regulators approve the product.