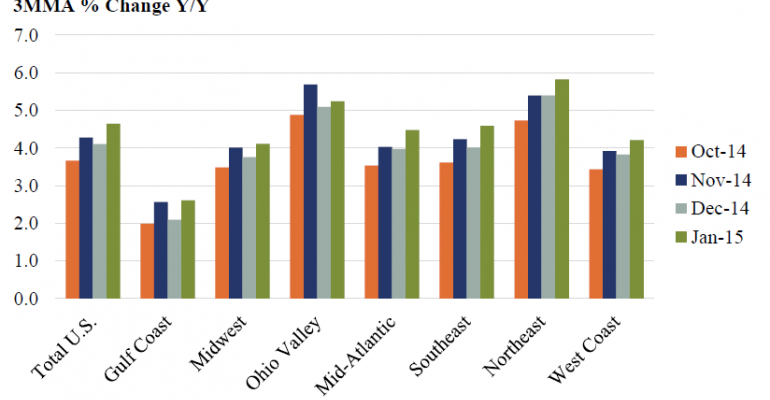 According to the American Chemistry Council (ACC), the U.S. Chemical Production Regional Index (U.S. CPRI) continued to expand, rising by 0.4 percent in January following a downwardly revised 0.3 percent gain in December, as measured on a three-month moving average (3MMA). The gain in January was the 10th consecutive monthly gain. All major chemical producing regions posted gains in January.

Also measured on a 3MMA basis, chemical production by segment was mixed. There were gains in the output of organic chemicals, chlor-alkali, synthetic rubber, synthetic dyes and pigments, industrial gases, consumer products, and pharmaceuticals. These gains were partially offset, however, by declines in the production of fertilizers, coatings, adhesives, plastic resins, synthetic fibers, acids, pesticides, and other inorganic chemicals.

The chemistry industry is one of the largest industries in the United States, an $812 billion enterprise. The manufacturing sector is the largest consumer of chemical products, and 96 percent of manufactured goods are touched by chemistry. The U.S. CPRI was developed to track chemical production activity in seven regions of the United States. It is comparable to the U.S. industrial production index for chemicals published by the Federal Reserve. The U.S. CPRI is based on information from the Federal Reserve. To smooth month-to-month fluctuations, the U.S. CPRI is measured using a 3MMA. Thus, the reading in January reflects production activity during November, December, and January.