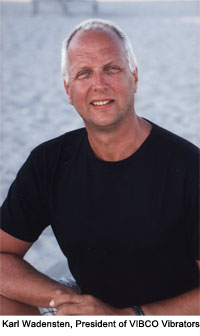 Karl Wadensten has been appointed by Rhode Island Governor Donald L. Carcieri to the Rhode Island Economic Development Corp. (EDC) Board of Directors. The appointments are subject to review and consent of the Rhode Island State Senate. Wadensten is the president of VIBCO Vibrators in Wyoming, RI and the host of The Lean Nation radio show airing daily from 4-5 p.m. on WPRV 790AM Talk and Business in Providence, RI.

"I'm honored to be selected for this important role," said Wadensten. "Rhode Island's economy is at a pivotal point and I want to bring Lean to the forefront of the conversation. I hope that my participation on the board means that the RI EDC will spend more time visiting actual places where work gets done. We have big challenges in Rhode Island, but there are thousands and thousands of great, creative minds in this state. We have the potential to do something really special here."

Under legislation passed by the General Assembly and signed into law by Governor Carcieri in 2009, the EDC board was expanded from nine members to 13 members, and includes one member representative of higher education. Under the legislation, the Governor will continue to serve as chair of the board and shall appoint the remaining members.

"The appointment of this board marks the final piece in our year-long effort to revitalize the Economic Development Corp.,” said Carcieri. “With an expanded and more focused board, a seasoned economic development professional leading the agency, and a clear strategic plan to move our economic development efforts forward, the tools are in place to improve the EDC, be more responsive to our existing businesses, support the growth of new industries, and improve our economic climate."

Appointees serving a four-year term, to expire on February 1, 2014, include Alfred J. Verrecchia, chairman of the board of directors of Hasbro Inc.; Steven Lane, co-founder and CEO of Ximedica; and Karl Wadensten, president of VIBCO.

Appointees serving a three-year term, to expire on February 1, 2013, include J.L. “Lynn” Singleton, president of the Providence Performing Arts Center; Dr. David Dooley, president of the University of Rhode Island; and Cheryl Watkins Snead, president and CEO of Banneker Industries.

"My appointments to the EDC board include highly successful business owners, young entrepreneurs, and representatives from higher education,” said Carcieri. “They represent small, medium, and large businesses across different industry sectors, including healthcare and life sciences, communications, infrastructure, manufacturing, hospitality and tourism, and financial services and insurance. The common thread they share is their belief in the potential for this state to be great and their commitment to improve our economic climate. The breadth of experience and know-how to be successful will serve the EDC and the state very well, and I am confident that their participation in the EDC will result in positive change for our business community."

"Job creation, and the related growth of our state economy, has become the single most important issue in Rhode Island,” said Keith Stokes, incoming executive director of the RI EDC. “A critical first step is to change and improve the way economic development is managed and executed by the RIEDC. The new board leadership will bring an unprecedented level of business leadership and expertise to lead this important first step in rebuilding the Rhode Island economy."