Starting up a new processing plant can be a tricky business for any company, but when it is the first plant the company has ever built and the location is halfway around the world from equipment suppliers, the project can be daunting. So it was with ForesTrade Inc. when it set about building Indonesia’s first state-of-the-art organic cinnamon-processing plant and an associated essential oils plant in a small, remote port city.

The Bumilindo Project was beset by a variety of problems, including delays in obtaining permits, hitches in the supply of equipment, bad weather, and the vagaries of the Indonesian customs service. The two plants were officially opened in March 2007, about a year behind schedule, but the spice plant, for cinnamon and cloves, did not become fully operational until March of 2008.

One of the biggest problems was the procurement of equipment, particularly a cutter and blender—key items in the cinnamon-processing plant. ForesTrade worked with two equipment suppliers, but both deals fell through according to Mary Porter, the former manager of the project and now manager of ForesTrade’s Indonesian operations.

Eventually, ForesTrade received assistance with the plant design from an unlikely source —a large local spice processor that is not a direct competitor of the Bumilindo project because it doesn’t work with organically grown products. “One of their engineers worked with us as a consultant to design our production line and he recommended equipment from Munson Machinery Co. in the United States,” says Porter. Munson subsequently delivered a high-speed screen classifying cutter that cuts the cinnamon sticks to the desired length, and a rotary continuous mixer that blend various grades of material to customer specifications.

Today the plants are running smoothly and “we are exporting high-quality products,” says Porter. The plants have HACCP (Hazard Analysis and Critical Control Points) and ISO 9000 certification and meet international standards for organic products.

Headquartered in Brattleboro, VT, ForesTrade is a producer and distributor of tropical, organically grown spices, coffee, and essential oils, with offices in The Netherlands, Guatemala, and Indonesia. The company buys the raw products from certified organic farmers, including more than 5000 farmers in Indonesia.

Prior to opening the new Indonesian plants, ForesTrade had contracts with various Indonesian companies to process most of its products. The company started up its own spice plant for cinnamon and cloves in 2001, but since Forestrade had limited resources and knowhow it was a rudimentary operation. Cinnamon bark was broken up by an old rice-hulling machine and the resultant chips were separated into piles based on their volatile oil content. Chips were selected from the piles and blended by hand to meet customer requirements for volatile oil content.

In 2004, ForesTrade obtained a $1.2 million grant to build the new plants from the Dutch Government’s Agency for International Business and Cooperation (EVD). To carry out the project, the company formed a joint venture with Mitra Ayu Adi Perkasa, an Indonesian processor of essential oils.

Cinnamon processing is by far the major activity in the plant, as the cinnamon—the inner bark of laurel trees—has to be cut into the appropriate lengths, dried, and blended to obtain the desired volatile oil content in accordance with customer specifications.

Cloves, on the other hand, are simply sorted and packaged by hand. Off-specification material is sent to the adjacent essential oils plant, where the cloves are crushed and ground and oil is extracted by supercritical carbon dioxide or by distillation. The plant also extracts oil from nutmeg and vanilla. The oils are shipped to customers, who further refine them for use as flavors and fragrances.

Located in the middle of a major production area for cinnamon and other spices, Padang might well be called the cinnamon capital of the world. The popular type of cinnamon in the region is cassia vera, which has a hot and sweet flavor, says Porter. Bark from the trunk of the tree has the highest volatile oil content, which gives it a spicy flavor. The branches have less volatile oil.

Cinnamon is received at the spice plant in bags as rolled sticks, known as quills, that range in length from 3 to 40 in. Samples of bark from each incoming bag are checked by distillation and by a water-activity meter to determine the content of water and volatile oil. The bags are then manually emptied onto a belt conveyor, along which workers remove stones and arrange the quills inline for the cutting operation. Soil and any other extraneous material are removed by a vibratory separator, while a magnet extracts ferrous metals.

From the conveyor line the quills are discharged into a rotary knife cutter and rough-cut to a maximum length of 6 in. The quills are then fed via a pneumatic conveyor into a Munson SCC-15-MS high-speed, screen classifying cutter. The unit’s horizontal rotor contains dozens of cutter blades attached to a helical array of staggered holders called “interconnected parallelograms.” The blades are chisel-shaped, with replaceable carbon tips.

Driven by a 20-hp motor, the blades rotate at 2200 rpm and continuously shear the quills against twin, stationary bed knives, cutting them into 2-in. lengths. Despite the high rotation speed, there is little to no heat generation and minimum fines. Also, the original carbide tips have not needed replacing, says Porter, even though cinnamon is abrasive.

The cutter contributes to quality by producing more-uniform pieces and by making a cleaner cut, with less waste than under the old system. Porter points out that having a clean, uniform cut is not only important for meeting size specifications, but makes for consistency in drying.

Chopped quills fall from the screen classifying cutter into sacks that are rolled by dolly to one of two solar dryers, polycarbonate-enclosed structures located outside the plant. There, cinnamon is segregated in piles according to volatile oil content.

Fans continuously move moist air out of the structures, reducing the cinnamon’s typical moisture content of 12–14% to the desired 10–11%, normally within three days. Material is then selected from various piles to meet the specifications for the next shipment and is manually loaded into a bucket elevator that feeds the mixing operation.

Bumilindo’s rotary continuous mixer (Munson Model 24 × 6-SS) consists of a horizontal cylinder 6 ft long by 24 in. diameter, supported at both ends by large trunion rings that ride on heavy-duty roller assemblies. A 1-hp motor rotates the drum continuously while material is added through a stationary inlet at one end, flows through the mixer, and cascades over a stationary weir (dam) at the discharge end of the drum. Thorough blending is promoted by proprietary mixing flights on the cylinder wall that tumble, turn, cut, and fold the material as the drum rotates.

The company operates the mixer at a speed designed to process 71 cu ft/hr of cinnamon. The mixer has a gentle action that provides two basic advantages: it does not break the brittle product and the abrasive cinnamon does not damage the stainless-steel cylinder wall.

The discharge weir is set at 25% of the cylinder’s fill level, which provides ample dwell time for thorough mixing. At the end of a product run, any residual material in the mixer is discharged by reversing the drum’s rotation.

Blended cinnamon discharges into a two-stage vibratory screener that separates the material into two size classifications. Discharged material is loaded into shipping sacks through pipe magnets that remove any ferrous metal. Porter adds that throughout the operation there is a system of aspirators and blowers to remove dust and light trash.

The plant has a capacity of 18 metric tons for a five-day workweek, with one eight-hour shift per day. This substantially outpaces the original plant, says Porter. Even more important, she says “the quality is much better because we are getting an even blend, which we weren’t able to do before.”

Besides being more efficient than the previous plant, the new system has dramatically reduced dust, which had been a serious problem. The main sources of dust were the old rice hulling machine and the rudimentary blending method, in which the broken cinnamon was piled on the floor and mixed by rakes. The two-cutter arrangement, plus the installation of a pneumatic dust control system, has practically eliminated airborne dust from the cutting operation. The blending operation is essentially dust free, since the product is completely contained in the mixer.

Today, the plant is considered a model for cassia processing and has received praise from visitors, many of them customers, for its efficiency and cleanliness. “Above all, people are impressed by how clean the place is because cassia plants are notorious for dust,” says Porter. 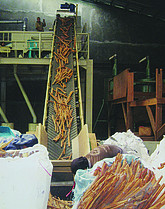 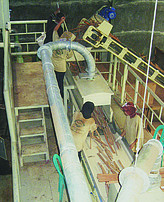 Cinnamon quills being fed to the cutting operation 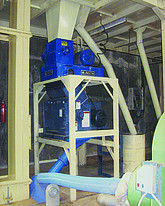