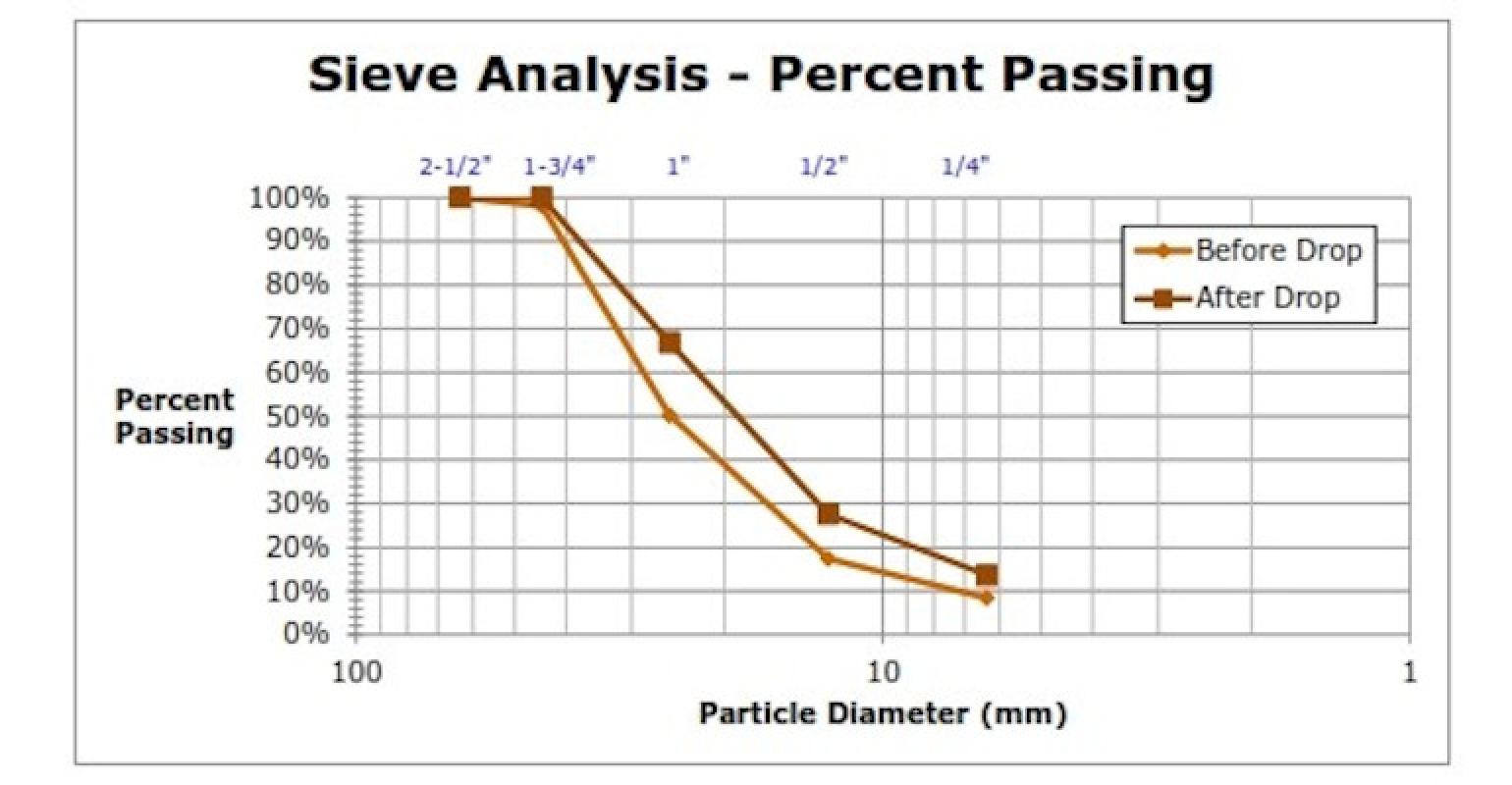 Scott Miller and Joseph Marinelli discuss the effects of silo storage, feeders and conveyors, and transfer points on particle attrition.

In Part 1 of our attrition article we discussed several mechanisms that cause particle attrition. Additionally, we described the tests to determine the degree of attrition you may experience. In Part 2, we will discuss some of the results of particle attrition along with ways to minimize it.

Mechanisms that cause particle attrition:

Tests to determine the degree of attrition:

* Impact attrition tests where a sample is dropped from a known height onto a chosen surface causing breakage.
* Particles sliding on particles involves a shear test is performed where the sample is sheared in a direct shear cell for a continued travel distance under a pressure. In funnel flow, the product flowing within the stagnant material can break down as it slides against itself.
* Particles of your material sliding on a surface requires a modified wall friction test on the same sample several times to determine if fines will be created by the sliding action on a hopper wall or chute.
* Crushing due to head pressure in a bin or silo requires a compressibility test which measures the bulk density of a solid as a function of pressure (increasing pressure can cause crushing).

Part 2: An Approach to Minimize Attrition

Here we will expand on each mechanism mentioned above. Additionally, we will discuss the effects of silo storage, feeders and conveyors, and transfer points on particle attrition.

Attrition Due to Impact on Filling a Bin or Silo

Particles can fracture or break due to dropping onto a surface, such as filling a silo or chute or transferring from one process to another, etc. A drop attrition test is run by dropping particles onto a sloping metal surface (to simulate a hopper) and dropping onto a pile of product. A sieve analysis is subsequently run to determine the percent breakage. (see top photo)

Particles of Your Material Sliding on One Another

Materials that flow in funnel flow in a silo, where some product is flowing while the rest remains stagnant, can attrite. The product flowing within the stagnant material can break down as it slides against itself. A modified direct shear test (typically used to determine a product’s cohesive or shear strength) is run by shearing the sample several times. Upon completion, a sieve analysis to determine if particles have degraded under load is run. 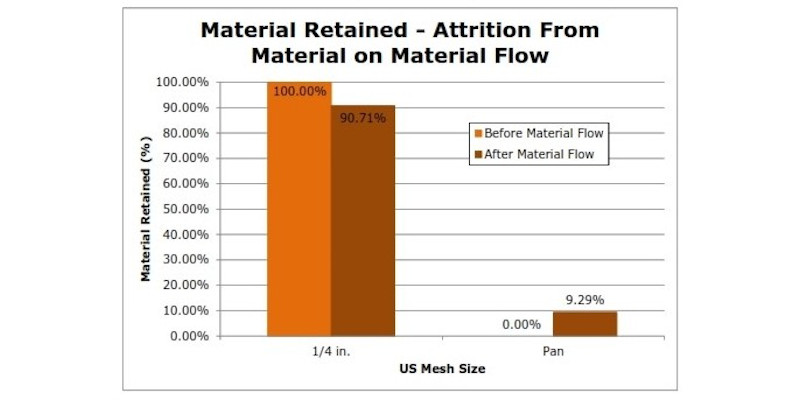 Particles of Your Material Sliding on a Surface

Sometimes particles can break as they slide on metal surfaces as sliding down a hopper wall or chute. A modified wall friction test (that is typically used to determine wall friction values for hopper design), is run. The material is pushed back and forth on the same sample several times to determine if fines have been created by this action. A sieve analysis is run to confirm if fines were created due to sliding attrition. 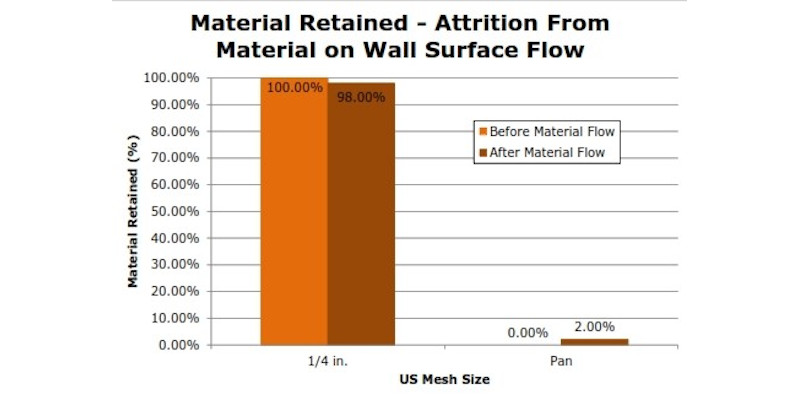 Crushing Due to Head Pressure in a Bin or Silo

Materials will be exposed to considerable head pressure during shipping and handling. Head pressure can cause friable particles to fracture or break. A compressibility test (bulk density vs. consolidation pressure) is used to determine the “crush” strength of the product. If the particles are breaking because of consolidation pressure, a compressibility test will show at some point, an increased slope indicating an increase in bulk density. Where to compressibility graph changes slope, indicates the pressure at which the particles are breaking. 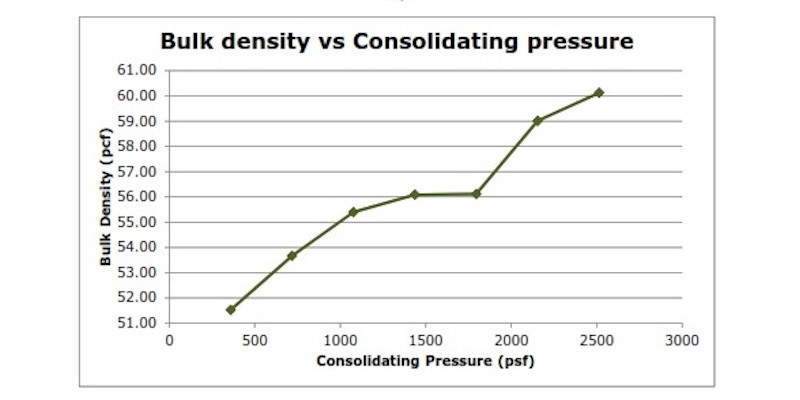 Effects of Silo Storage, Feeders and Conveyors, and Transfer Points

Once testing has been completed, it is necessary to determine the sensitivity of a given material to the various mechanisms that lead to attrition. This information can be used to design a new system or modify an existing one to reduce particle breakage. It is important in each material handling application to determine an acceptable threshold of attrition. Attrition results in either damaged particles as well as fines being generated. How much particle breakage is tolerated is typically driven by product quality, process efficiency, or material flowability. For example, the damaged particles or the presence of the fines may affect how a chemical reactor operates. As well the finer fraction of material represents the limiting case of material flowability meaning an increase in fines from attrition results in worsening flow problems.

When the threshold of allowable attrition is determined, the previously discussed attrition testing results can be used to identify the key areas of concern in each application. Most applications will have three areas where attrition may occur; these are bins and hoppers, feeders and conveyers, and transfer points.

When a bulk solid is stored in a hopper, some type attrition may occur during the filling, storage, and emptying processes. During the filling process those materials’ sensitive to impact attrition will experience breakage as they drop into the silo. This can be addressed by either a design or operational change. If attrition during the first initial fill is acceptable, then once the silo has been filled, the material height can be maintained at a level where the incoming stream of product has minimal drop height to minimize attrition (dropping onto a pile as opposed a hopper wall). A more robust solution is to use some type of letdown chute to gently feed the material into the silo.

When the silo is full of product, the material will be under pressure from the other material. For any given silo it is important to compare the pressure profile in the silo with the results of the attrition test for crushing due to head pressure. For an existing silo, this may indicate a safe maximum fill point to minimize pressure and therefore crushing. For a new installation, this information can determine both the size and configuration used when sizing a bin or silo.

Attrition may also occur during material discharge from the bin. The level of attrition will be strongly influenced by the flow pattern. In some cases, the flow of a bulk solid on other particles leads to severe levels of attrition, requiring mass flow as opposed to funnel flow. In certain cases, the use of a discharge tube may be required for the necessary reduction in attrition.

From a flow standpoint the feeder design is as important as the bin design. As well, from an attrition standpoint the feeder can be equally destructive as the hopper to the particles being handled. Most of the guiding principles for identifying and minimizing attrition during feeding as well as conveying requires examination of the material in motion with itself, as well as potential pinch points within the moving parts of the equipment. Screw feeders and quickly turning rotary airlocks are both notorious for fracturing friable materials. Often previous experience with specific equipment as well as a thorough understanding of the equipment’s components and its’ operation will guide the selection for minimizing attrition. As well, when testing indicates that a material is sensitive to breakage from testing, subsequent equipment trials of feeding and conveying equipment allow for the appropriate equipment selection.

Transfer points often serve as the connectors between the silos and other equipment. Typically, these transfer points involve some type of chute with a sloped enclosed surface. Particle breakage inside of chutes is predominantly a function of impact, velocity, and loading. Proper chute design can be accomplished by knowing the material’s chute flow characteristics. As well for more complex chutes a discrete element method (DEM) analysis can be used to determine the specific velocities of a given bulk solid at any point within the chute. This information is used to redesign or tune the chute layout to minimize attrition.

The three areas of bins, feeding and conveying, and transfer points (chutes) must be taken into careful consideration when working with a bulk solid that is sensitive to particle attrition. In certain applications where modifications to these areas is either not feasible or impractical, it may be possible to change the material. For example, it may be possible to change the particle shape of a bulk solid or apply a coating to create a tougher particle.

In any application where attrition is a concern it is important to have attrition tests run to quantify the material’s sensitivity to the various mechanisms discussed previously. These results typically lead to modifications in the operation, the equipment, and sometimes even the material to prevent breakage.

In any given process it may be difficult to know if attrition is a valid concern. Furthermore, attrition frequently is accompanied or entwined with its close cousin, material segregation. Often the two will work in unison or cause compounding issues. For those who suspect attrition is causing problems we suggest they examining the issues experienced with unexplained fines, damaged product, and flow or process fluctuations when handling potentially friable solids. All of these serve as warning flags of the presence of attrition. From here it is possible to have attrition tests run to then make informed decisions to resolve these issues.

1. Determine what level of attrition is allowable.
2. Determine materials sensitivity to attrition in silos, feeder/conveyors, and transfer points.
3. Examine how material is to be handled and based on the testing determine how much attrition will occur.
4. Modify material, equipment, or operation to address attrition.
5. For those who are unsure: Warning flags.
a. Flow problems with a more granular material, quality control issues
b. Is segregation (close cousin) effecting your analysis of attrition problems?

Attrition tests must start with a representative sample of either the typical or ideal product. It is vital the starting state of this sample be known. Additionally, proper sample preparation techniques, such as riffling to split a sample into smaller samples, are required. Creating a series of representative samples from a larger one, allows for data comparison between the samples and tests.

Scott Miller is a senior consultant and Joseph Marinelli is a senior consultant and founder of Solids Handling Technologies (Fort Mill, SC). Miller works closely with clients to provide the expertise required to evaluate and solve their solids flow problems. He analyzes flow properties test data produced by the company’s testing lab and writes flow reports describing the parameters necessary to resolve flow problems. Marinelli has been providing testing and consulting services since 1972. As a consultant, he worked with Dr. Andrew Jenike for 23 years. He lectures frequently on the topic of powder handling and has published several papers including an article in a chemical encyclopedia and two in a food powder book. For more information, visit www.solidshandlingtech.com.

How to Properly Apply Flow Aids to Get Material Moving from Bins or Silos
Nov 19, 2020