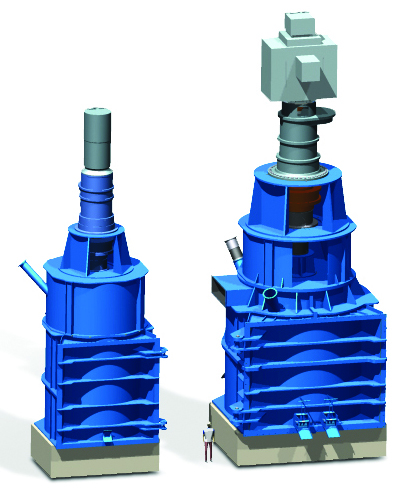 The first 3000-hp Vertimill, known as the VTM-3000-WB, is destined for Newcrest Mining Ltd’s Cadia Valley Operations, where it will be operated in a tertiary grinding role. Cadia’s concentrators in New South Wales already have several Vertimills (VTMs) operating in traditional regrinding roles, as well as a VTM grinding SAG product in parallel with a ball mill.

The Metso VTM grinds more efficiently than ball mills with feeds as coarse as 6 mm to products finer than 20 microns. It has become a standard in concentrate regrind applications, but has been slow to be adopted for large-scale coarser applications. The hesitation to advance VTMs in primary and secondary grinding is largely because more VTMs are needed to perform the same task as a single large ball mill. The new VTM-3000-WB, however, reduces the number of units required. Cadia is now able to get the grinding power it needs to meet its product size requirements with a single Vertimill.

“The VTM-3000-WB is an enabling technology that allows operations like Cadia to get the maximum payback and profitability for their grinding projects,” says Jonathan Allen, Metso’s Vertimill product manager. “It has all of the same components and therefore the same advantages as smaller VTMs, but with the added advantage of lowering total capital cost and maintenance.”

The Cadia Valley operations are based on a large, low-grade ore deposit requiring high throughputs to maintain profitability. These commenced with the Cadia open cut mine and concentrator, which commissioned in 1998, and the adjacent Ridgeway underground mine and concentrator, commissioned in 2002. Current capacity at Cadia is 17 million tons per annum and for Ridgeway 5.6 million tons per annum.

The near surface ores are being worked out, so to ensure the longer term future at Cadia Valley, Newcrest is developing two underground projects — Ridgeway Deeps and Cadia East.

In addition to the process advantages of the Vertimill, the project also had space limitations, so the small footprint of a single VTM made it the ideal solution.

The VTM will be delivered mid-March 2010 and commissioned by the end of June. Installation support and process commissioning services are included. Newcrest is Australia’s largest gold producer and one of the world’s top 10 gold mining companies by production, reserves, and market capitalization. The company has five operating mines in Australia, one in Indonesia, and one in Papua, New Guinea.

Metso is a global supplier of sustainable technology and services for mining, construction, power generation, automation, recycling, and the pulp and paper industries. For more information, visit www.metso.com.