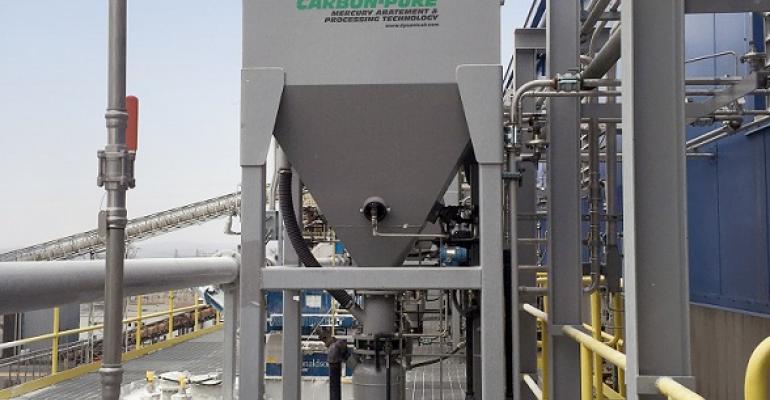 EME Homer City Generation LP, located in Homer City, PA, is an 1884-Megawatt coal-fired merchant power plant. For some time now government legislation has demanded that all U.S. coal-fired power plants have to reduce and/or eliminate the amount of mercury exhausted from the plant into the atmosphere. One solution to neutralize the mercury in the exhaust gasses is to feed carbon graphite powder into the exhaust ducts evenly and on a continuous basis. Since the coal burned by every power plant has a wide range of mercury present in the coal itself and will vary depending upon where the coal is sourced and the different types of coal burned, the solution will vary. Thus the solution is not always the same for each and every power plant.

Dynamic Air was contacted to help develop a solution for the wide varieties of coal handled and to both convey and to inject the carbon graphite into numerous specific exhaust ducts. It was then determined Dynamic Air needed to potentially provide 20 injecting systems. A number of different design solutions were discussed and brainstormed, but one concept stood out as being the best solution and ultimately became the solution of choice.

Although the final solution chosen had yet to be confirmed, it needed to be tested for accuracy and overall performance. Dynamic Air needed to prove that this system could convey and inject the carbon graphite on a continuous basis to neutralize the exhaust gasses. It was then decided that the company’s HDP 3000 dense phase low velocity pneumatic conveying system was a natural solution for this application. Although the final design concept had yet to be tested, Dynamic Air needed to confirm that this approach was in fact feasible. Next, a test system had to be installed at Dynamic Air’s test facility in St. Paul, MN in order to measure and confirm all the critical design parameters. These operating parameters included such data as the convey pressures, conveying air velocities, injection rates, compressed air volumes, and air-to-material to ratios.

Another key design element was to determine just how many injection points would be required to provide the even distribution rate of the carbon graphite into the exhaust ducts.

Dynamic Air then designed and built a full-scale prototype system in its factory to prove this new concept. This approach used convey line splitters and the company’s patented injectors to continuously inject and feed the carbon graphite into the main dust collector exhaust ducts on a continuous but precise basis to capture and neutralize the mercury. One critical design feature was that the system provided had to have the ability to precisely control the amount of carbon graphite depending upon the exhaust gases. To minimize cost and provide simplicity to the concept, it was decided to use common pressure vessels and a conveying line that had conveying line splitters. The conveying line splitters had to be designed such that each injector could be automatically adjusted to deliver an even and consistent amount of carbon graphite to numerous injection points.

In addition, the reliability of the system to inject the carbon graphite against varying exhaust duct pressures was a prime requirement. Finally, the simplicity and durability of operation was also important and a key design element, because this system had to operate 24 hours a day, 365 days a year in varying atmospheric conditions, as the equipment was located outside in sometimes freezing conditions. Also, everything had to be robust and of heavy-duty construction to handle a system operating continuously.

Other design factors were that the Dynamic Air system had to have the ability to convey the carbon graphite at extremely low conveying line velocities to help guarantee low equipment maintenance, longer life, and high reliability. Another important feature of Dynamic Air’s dense phase conveying system was that the rate of carbon injection could be easily increased or decreased on demand and/or depending upon the mercury levels.

The Solution
During testing at Dynamic Air’s test facility, it was proved that Dynamic Air could meet all the critical design specifications using its prototype design. Dynamic Air was able to verify the accuracy using the conveying line splitters and the ability to increase and decrease the convey rates. It was then decided to furnish a total of 20 preassembled and identical injection modules, each having three conveying line splitters and multiple injectors. Also, each of the 20 preassembled modules include an HDP 3000 conventional concept dense phase pneumatic conveying system, a Model 200 Modu-Kleen cartridge dust collector, and a 25-cu-ft surge hopper complete with vacuum pressure relief valves and multiple level controls. This product is the carbon-pure mercury abatement & processing technology system. Dynamic Air also supplied one 100 psig oil-free rotary screw compressor with an air-cooled after cooler, complete with a regenerative air dryer rated for a full-pressure dew point of -40ºF, one single air surge tank, and an Allen-Bradley PLC logic controller.

The Results
EME Homer City Generation LP’s decision to install the Dynamic Air carbon-pure mercury abatement & processing technology system has enabled this coal-fired power plant to meet and/or exceed the strict government environmental regulations for the exhaust gasses now and into the future. In addition, the ability to precisely inject the carbon graphite saved considerably on operating and maintenance costs. Due to the preassembled modular design of the equipment, the installation time was decreased significantly.

What is the Difference Between Dense Phase and Dilute Phase Conveying?
Dec 01, 2022