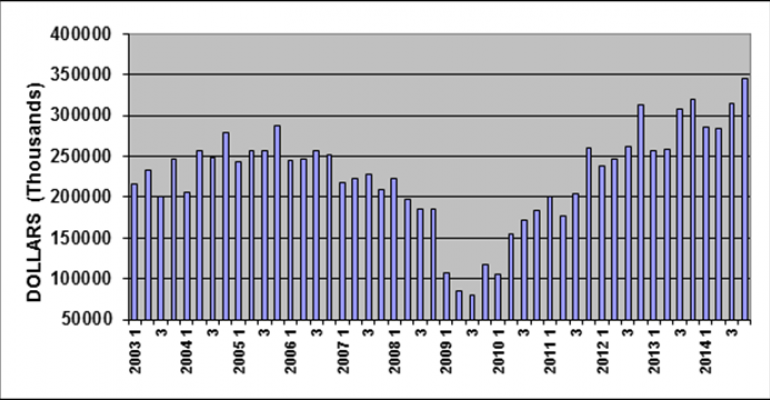 Shipments of plastics machinery posted a robust rise in the fourth quarter of 2014, according to statistics compiled and reported by SPI: the Plastics Industry Trade Association’s Committee on Equipment Statistics (CES).

“Annual shipments of plastics machinery increased for the fifth straight year in 2014, and the economic fundamentals that favor continued investment in capital equipment are expected to persist through 2015 as well,” according to Bill Wood, the plastics market economist who analyzes and reports on the plastics machinery market sector for the CES.

Shipments of primary plastics equipment (injection molding, extrusion and blow molding equipment) for reporting companies totaled $346.1 million in Q4. This was 9.8 percent higher than the revised shipments total of $315.1 million in Q3 of this year, and it was up a solid 8.0 percent when compared with the total from Q4 of 2013. For 2014 as a whole, the total value of primary equipment shipments was up 7.6 percent compared with the annual total from 2013.

The trend upward in the CES data on plastics machinery shipments corresponds with the long-term trends in the two major data series compiled by the U.S. government that measure overall demand for industrial machinery. According to the Bureau of Economic Analysis, business investment in industrial equipment escalated by 16 percent (seasonally-adjusted, annualized rate) in Q4 when compared with Q4 of 2013, and the annual total for investment in 2014 was up a vigorous 13 percent. 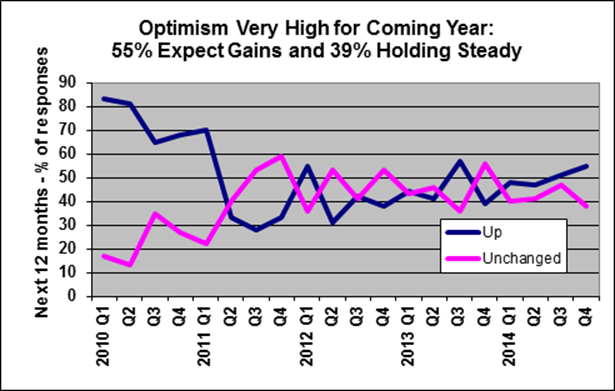 "The short-term problems caused by a stronger dollar and a downsized oil patch notwithstanding, the recovery in the U.S. economy will continue through 2015. The stock market is still at an all-time high. Corporate profits are still at record levels. And as I have said before, the three main trends that will drive the economy over the coming months are already well-established. They are: low interest rates, low energy prices, and rising wages and household incomes resulting from stronger employment levels," said Wood.

The CES also conducts a quarterly survey of plastics machinery suppliers that asks about present market conditions and expectations for the future. The responses from the Q4 survey indicate that machinery suppliers remain optimistic about the market demand for their products in the coming months. When asked about expectations for future market conditions, 92 percent of the respondents expect conditions to stay the same or even improve in the coming quarter, and 94 percent expect them to hold steady or get better during the next 12 months.

As for the major end-markets, the respondents to the Q4 survey still expect that automotive and medical will remain strong in terms of demand for plastics products and equipment. Expectations for all other end-markets call for steady-to-better demand to prevail in 2015.