Mixing and Dust Reduction in a Horizontal Plow Mixer 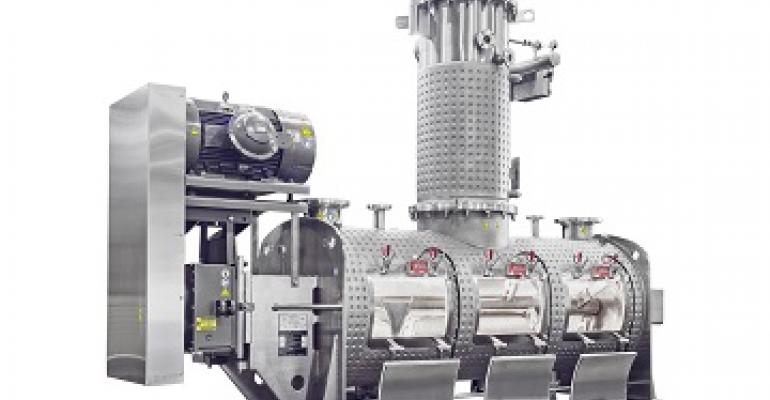 The efficiency and robustness of the plow mixer in a wide variety of applications is well established. Unlike low-intensity mixers (such as ribbon blenders) which “gently” mix ingredients over long cycle times, a plow mixer at full speed can reach homogeneity in as little as 90 seconds. Unlike high-intensity mixers, a plow mixer does not impart high shear and heat in direct proportion to mixing intensity. The key is in the mechanical fluidization of the solids, which is achieved by optimizing the speed and shape of the mixing tools, or plows.

Minor ingredients or additives, comprising as little as 0.5% of the mixture, are quickly and uniformly dispersed throughout the batch by the action of the plows, which fluidize the material, rather than a folding motion or slicing action.

For dust reduction in solids mixtures, three common methods are surface treatment, densification, and granulation. The plow mixer has distinct advantages when dealing with each of these dust reduction methods.

Surface Treatment
Surface treatment usually involves a liquid, such as a silane, which must be uniformly dispersed on the powder at low concentrations. When using a low-intensity mixer, it is usually necessary to pre-mix this liquid onto a carrier such as silica, and then mix for long times to ensure even application. When using a mechanically fluidized bed, such as the plow mixer at full speed, the liquid can be injected as a fine spray into the headspace of the mixer. The liquid is dispersed quickly throughout the entire batch, eliminating the need for a carrier solid.

To complete the surface treatment of the powder, a heating step is typically required to initiate a surface reaction between the silane and the substrate. With the efficient heat-transfer characteristics of the plow mixer, the powder can be heated and then cooled again within several minutes, in the same vessel, avoiding material transfers.

Densification
The goal of the powdered metal blending process is to produce a uniform dispersion of additives (such as graphite metal stearates or other lubricants) while densifying and achieving a specified flowability. Dense yet flowable blends create less dust when handled.

Low-intensity tumble mixers are not well suited for mixtures containing components with widely varying specific gravity or particle size. The required cycle time for densification in such a low-power mixer can be excessive.

The special mixing tools in some mixers induce direct contact of the powdered metal with the additives. The high-speed mixing and dispersing action puts shear into the batch, quickly producing a uniform and homogeneous blend. This results in both densification and improved flow properties. The metals and additives can have a wide range of specific gravities without impacting the uniformity of the final blend.

Since the total net power input to the batch can be directly correlated to the required mixing time, the desired endpoint may be determined by monitoring the power consumption. This provides an easy and reliable means of automating the process.

Granulation
Granulation is primarily used to render powders to a form, which facilitates their flowability and handling. A typical food granulation contains several ingredients: powdered excipient, small amounts of active ingredients, and a liquid binder, which locks the powders together as granules and prevents segregation. The size and uniformity of the granules is dependent on the mix action, particle size of the powder, type of binder used, and the degree of dispersion.

Previously, the food industry required separate equipment to pre-disperse, blend, and then granulate food powders. Several problems were inherent with this multi-step granulation process. Each step required separate vessels, each with its own cost, individual cleanout, and regulatory validation. Granulation was more of an art than a science. The operator had to determine the degree of wetness achieved and judge the amounts of liquid and mix time necessary. Thus, granulation runs were not consistently reproducible. The dried granular product often had to be screened, removing over and under-sized particles, yielding the desired finished product, i.e., the granules of narrow particle distribution and uniform density necessary for proper control.

To handle a bakery mix, for example, the mechanically fluidized action developed by the plows is supplemented by high-speed, high-shear, chopping devices that are mounted between adjacent plows and act to de-agglomerate powders and disperse shortening. Since the chopping devices can be operated independently of the plows, overworking of the mix can be avoided.

With few exceptions, one of the main ingredients of all bakery mixes is sugar or a sugar derivative, which cause problems as far as shaft seals are concerned. The materials of mix press into these seals (stuffing boxes) where frictional heat develops. Due to this heat, the materials may scorch or carmelize and ruin the seals and thus contaminate the product. This is avoided by purging a small volume of air through a narrow, encircling orifice around each rotary shaft as it passes through the wall of the mixer. This air passes into the mixer and is exhausted through a vent opening on the top of the mixer. As long as the air flow is maintained, it will prevent leakage of material into the seals.

As seen in Figure 1, a typical food granulation, the excipient and the powdered active ingredients are delivered to the static granulator. Mixing begins utilizing the plows until the power curve levels, indicating the dispersion is complete. Then the agglomerating liquids are sprayed into the active chopper field where they are quickly dispersed into the batch’s ingredients, thus bringing about the desired finished food granulation simultaneous with its corresponding increase in power.

The degree of granulation, correlating directly with the power used, is dependent upon the amount of agglomerating liquid added to the batch and the amount of wet mix time utilized. The resultant three-dimensional action of the plows causes “snowballing”: the shearing action of the chopper generates uniform, small granules.

As seen in Figure 1, particle size grows as mixing time and liquid is increased. Plows and choppers are utilized until the desired granule size is achieved, indicated again by a leveling of the power curve.

Since the longer wet mix time more thoroughly wets the granules it reduces the liquid required to reach the desired particle distribution and density specifications. The most uniform particle distribution is achieved with liquid mix times and higher liquid addition levels. Varying the liquid level, mix time, and power requirements for a given mixture may be optimized quickly in a pilot-scale unit.

Identical food granulations generate identical power curves: This fact takes the guesswork out of knowing when the proper granulation objective has been achieved.