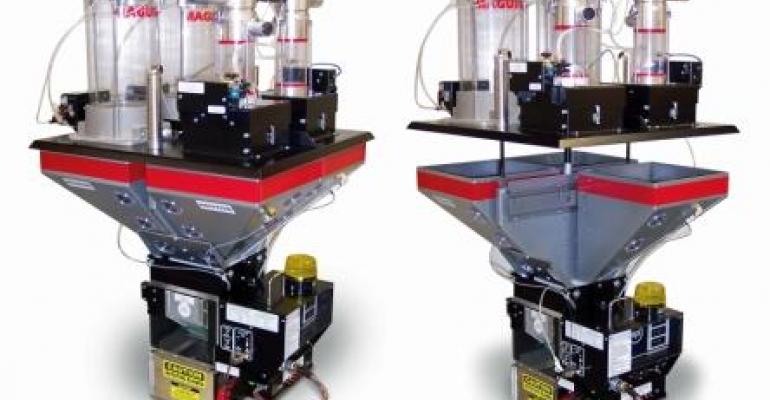 Maguire Products Inc. has received a U.S. patent for a pneumatically powered system that speeds job or color changes for gravimetric blenders that have been deployed with loaders mounted atop the hopper lid. The patent number is 8092070.

The system, called Loader Lift, reduces changeover time by lifting the hopper lid at the touch of a switch, providing easy access to ingredient bins without need to remove the loaders feeding them. Maguire has designed the bins to be removable.

The Loader Lift system is available for an added cost of $500 on new units of two of the most widely used Maguire blender models, the MicroBlender (up to 100 lb/hr) and the MicroPlus (up to 350 lb/hr).

Once the Loader Lift system has raised the hopper lid and the loaders atop it, there is ample room for the operator to remove the bins. Two safety features prevent the operator from accidentally having fingers caught if they are resting atop the bins when the lid is lowered: 1) the lid cannot be lowered unless the operator presses two buttons simultaneously; 2) a large rubber flange protruding from the rim of each bin leaves more than enough room for fingers even if the lid were fully lowered.

The hoppers bins are typically used for natural resin, regrind, color, and additive.