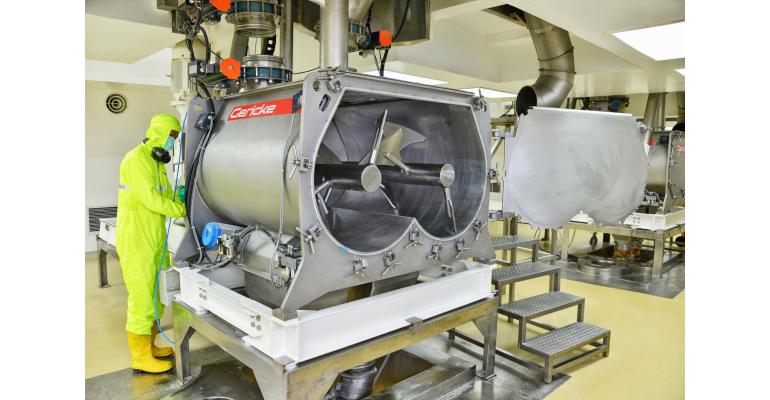 I recently received a quote request for a mixer from a food technologist tasked with developing a new version of a best-selling product, but with a cleaner label and all-natural, functional ingredients. The new recipe called for several of these ingredients in quantities from 20% to near or below 1% and the mixer in their test lab was unable to consistently produce a homogeneous mix. When ingredient quantities approach 20% of the mixture--often called minor ingredients--or dip near or below 1%--called microingredients--it is common for many types of mixers to struggle with end-product uniformity. Yet these microingredients are not only challenging to mix evenly but they also typically cost more than traditional ingredients, and their delicate, sensitive properties often require special consideration in processing. Unfortunately, more and more product development professionals in the food, beverage, and nutrition industries are learning about these issues through costly trial and error.

While most pharmaceutical processors have invested many years in mixing very small amounts of active ingredients (API) and flavors with a variety of much larger volumes of excipients, the spike in consumer demand for nutritional supplements and healthier foods and beverages has driven companies with less experience processing microingredients to develop new products that meet this demand. These probiotics, herbs, spices, trace elements, and/or otherwise healthier ingredients that may impart medicinal or preventative health benefits (along with critical marketing benefits) are typically used in very small amounts as microingredients without compromising the desired functionality. However, many of these ingredients, such as flax seeds and soy protein, often need to be masked by the major ingredients due to their taste and texture. Even a slightly higher amount in the mix could negatively affect consumer acceptance.

Types of Mixers for Microingredients

When a recipe calls for mixing one or more microingredients, some types of mixers are simply better able to uniformly integrate them together than others by design. Mixers that simultaneously apply radial dispersion via rotation, and a combination of axial flow (moving parallel to a mixing rotor) and radial flow (moving perpendicular to a mixing rotor) create the turbulence needed to draw the ingredients from the sides and from at and below the surface and direct them through the mixing zone without losing the precious microingredients along the outer edges. This turbulence, however, needs to be carefully controlled to avoid applying too much shear, which may damage the delicate microingredients.

One mixing concept that applies these opposing forces and minimizes shear uses double shaft, counter-rotating, horizontal mixing rotors to generate a fluidized bed. This allows the intermingling product streams to meet in a suspension, which exposes a large amount of each particle's surface area for mixing and yields high particle exchange values. At the same time, the mixing tools constantly direct the material flow through the mixing chamber then separate and return for an intense mixing action. This type of mixing has been applied in batch mixing systems and typically yields a homogeneous mix within 30 seconds regardless of the number of input ingredients. The same concept incorporating the optimum combination of dispersion with radial and axial flow is also being applied in continuous mixing. The rotation of the mixing screw tool creates forward motion that forms a fluidized zone between the screw and barrel for an intense mixing action comparable to batch.

By contrast, ribbon blenders apply both radial and axial forces but lack the forward and backward motion provided by radial dispersion needed to achieve maximum homogeneity. Planetary mixers often excel at mixing thick materials that require high amounts of shear and can withstand the tearing forces or where the final particle size and shape are not critical.

Though not ideal for many microingredient mixing applications, these and other mixing concepts may be effective depending on the ingredients, particle size and shape, moisture content, and other factors.

It is tempting to focus on designing the ideal mixer for the new formulation but even the perfect mixer will struggle to achieve a homogeneous mix if it has to overcome any of the many possible problems that may arise upstream.

In the journey from storage to the mixer, for example, many microingredients need protection from contamination. Exposure to the plant environment during powder transfer can invite contamination from humidity, ambient dust, pests, and other sources, and cross-contamination from other ingredients left in any machinery. Workers manually carrying and emptying sacks into a mixer also pose a threat to product purity. If a minute amount of waste or other contaminant soils a major ingredient in a recipe such as wheat flour, then a typical batch volume can accommodate the issue without concern. But if the same, minute amount of waste or other contaminant soils a microingredient then the proportional impact may significantly alter the properties and ruin the entire batch. To safeguard the purity of these ingredients, many process engineers specify enclosed conveyors such as pneumatic conveying systems that automatically transfer the bulk materials from storage either directly to the mixer or first to a sifter and/or feeder without human contact or risk of exposure to the plant environment. These enclosed powder transfer systems also prevent product degradation and loss to ensure the entire volume of material arrives safely for feeding into the mixer. 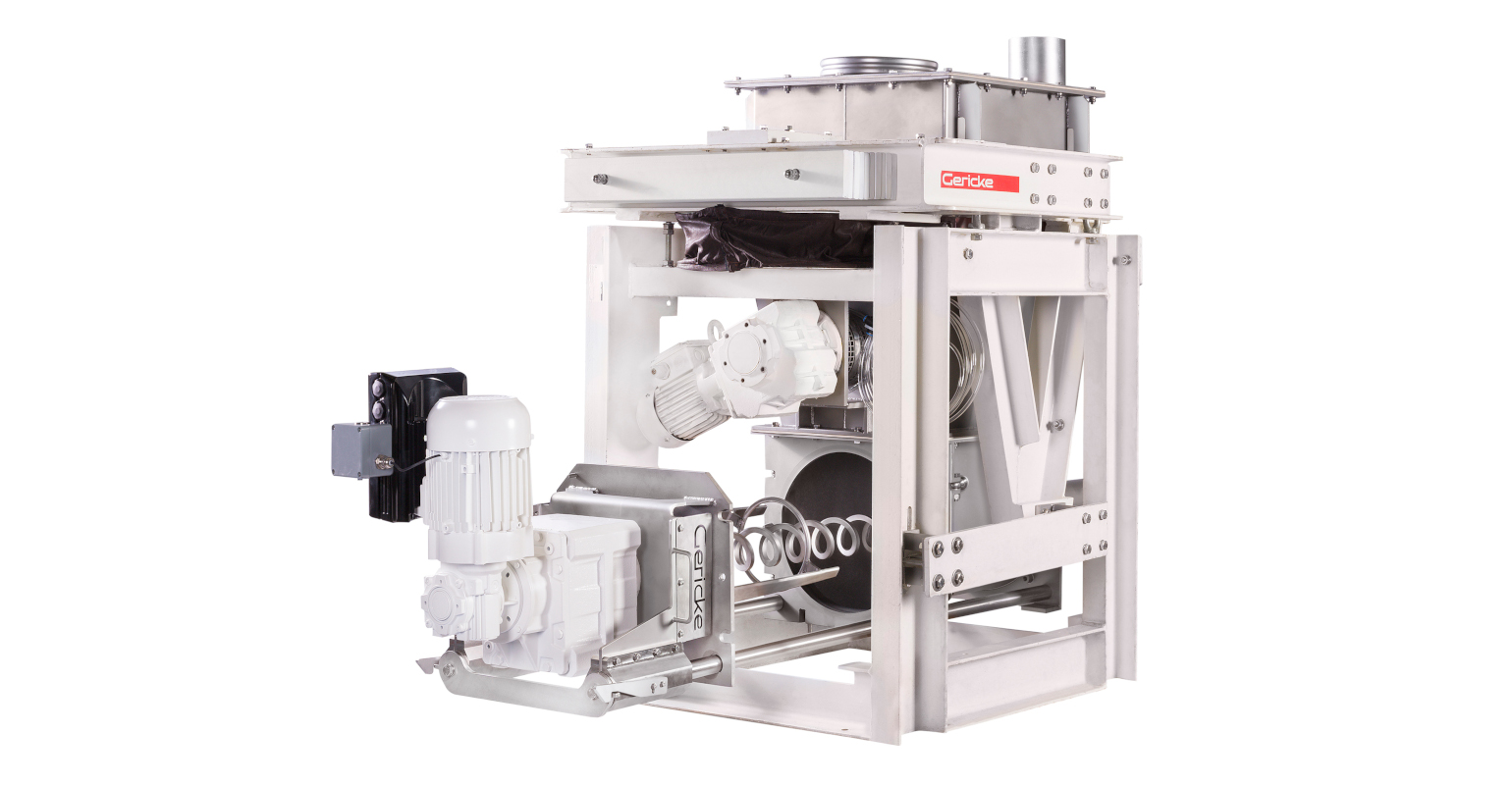 The relatively tiny quantities of microingredients require highly accurate weighing, measuring, and feeding into the mixer, typically using a loss-in-weight feeder. This gravimetric feeder from Gericke is suitable for food, pharmaceutical, and other sanitary processes.

Feeding microingredients poses several challenges that need to be addressed for the mixer to operate at peak efficiency. When feeding large amounts of major ingredients, measurements for the volume, weight, and/or the feed rate may be allowed a fair amount of leeway given the relative risk of adverse consequences upon mixing. But the relatively minute amount of a microingredient demands precise feeding and weighing. Even tiny errors can result in huge discrepancies between the target quality specifications and the actual product discharged from the mixer due to the proportional impact on the small volume. The most common culprit is human error. While workers typically measure major ingredients with enough accuracy to meet quality specifications, manually measuring microingredients invites the errors that can result in discarding a batch as waste. The amounts are too small and the consequences too large to risk leaving this task in the hands of even the more experienced workers.

To ensure exactly the required amounts of microingredients are fed to the mixer, many processors specify automated loss-in-weight (LIW) feeders with advanced control technology. These gravimetric feeders with built-in load cells accurately weigh a preset amount of material then gently dose it into the mixer. Or the feeders may be set to continuously meter the material into the mixer at a preset rate for continuous processes. These may be designed to handle 100 g/hr to upwards of 30 tn/hr. When feeding regulated materials as microingredients, such as APIs for manufacturing pharmaceuticals or vitamins (in some countries), this computer-control provides both the feeding accuracy to ensure product quality and the documentation to meet regulatory requirements for record-keeping. In addition, while major ingredient feeding may be measured using gain-in-weight (GIW) feeders set at the mixer, the large amounts being weighed in the mixer make it difficult to accurately detect the proportionally lighter amounts of microingredients. It is common for multiple LIW and GIW feeders to feed multiple ingredients into a single mixer to match each ingredient with the required level of accuracy. 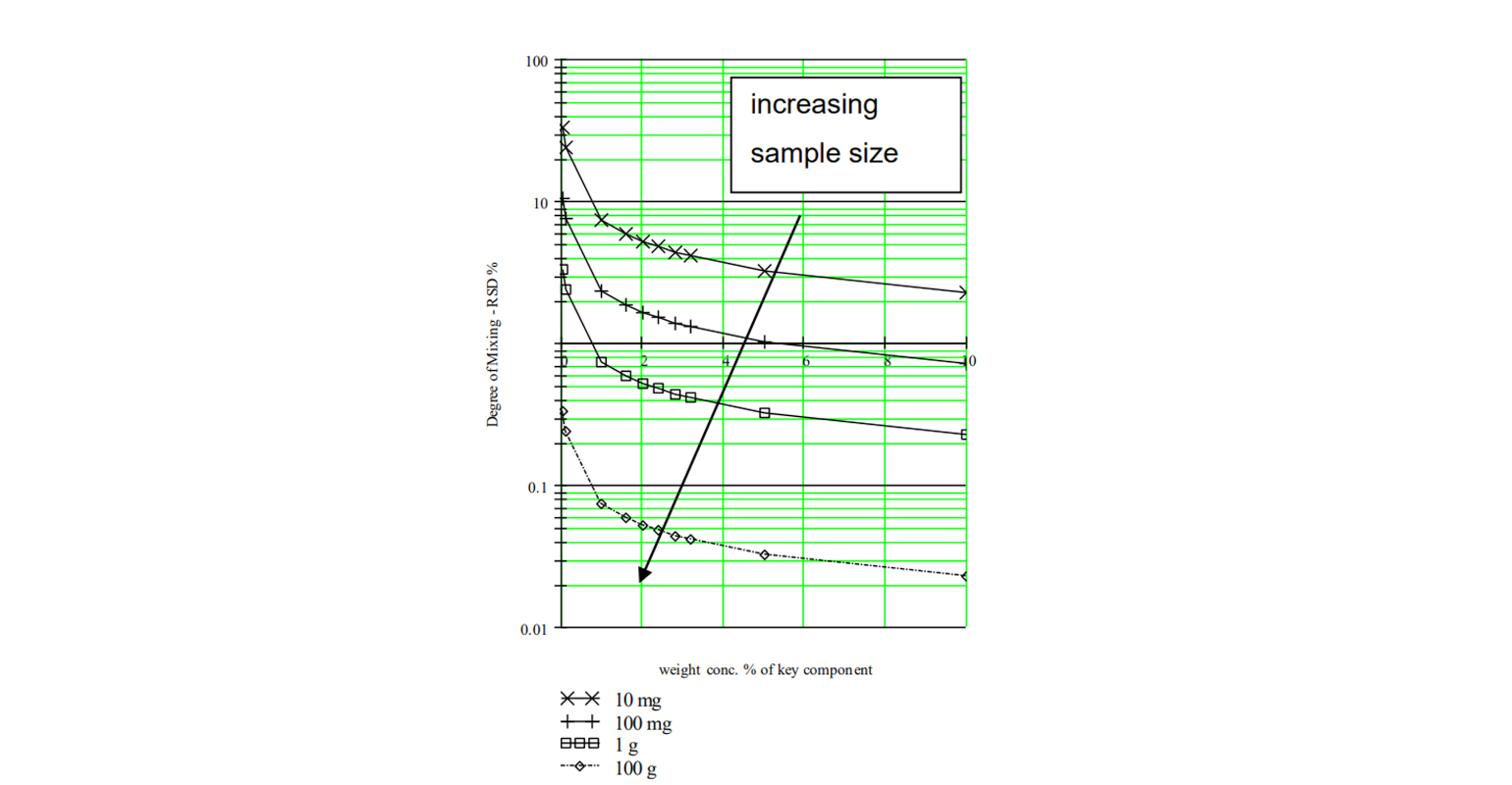 Figure 1: This graph illustrates how mixing quality expressed as the relative standard deviation (RSD) improves as the weight concentration of material increases relative to the other ingredients, and as the total amount oFiguref the microingredient increases.

This avoids feeding more or less material than intended, which wastes precious material and may render the batch as waste. The importance of even tiny changes in the amount of a microingredient in a recipe can be clearly demonstrated when quantifying the degree of mixing quality expressed as the relative standard deviation (RSD) (Figure 1). Mixing quality improves as the weight concentration of material increases relative to the other ingredients, and improves even more markedly as the total amount of the microingredient increases.