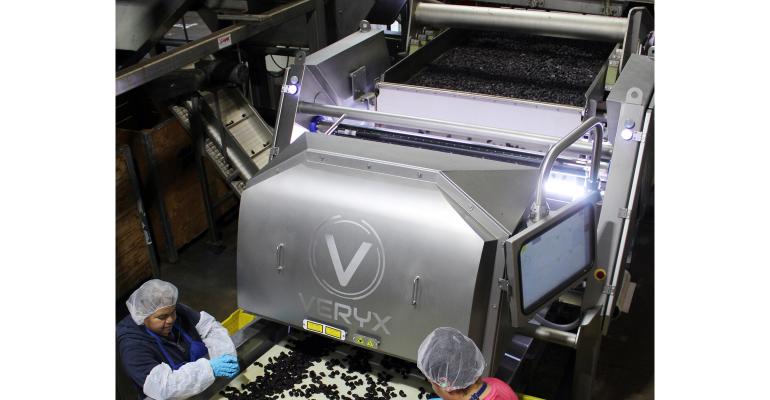 Mariani has been a leader in the dried fruit industry for 115 years by focusing on product quality and production efficiency. Last year, they decided to integrate grading and sorting on one prune processing line at their Marysville, CA facility and began searching for the ideal sorter for this application.

Mariani selected a Veryx optical sorter from Key Technology to find and remove all kinds of foreign material (FM) and the right amount of product defects to make grade while maximizing yield.

“We needed a new sorter to replace a 12-year-old standalone sorter that required us to size-grade prunes before sorting – it was an inefficient process, to say the least,” said Andrew Kennedy, director of grower relations at Mariani. “We talked with several suppliers and decided to go with Key Technology. Veryx gives us more advanced sorting capabilities as well as a higher throughput in a smaller footprint.”

“Since a lot of our growers are diversified and grow several different crops, it’s not unusual for us to see some cross-contamination,” explained Kennedy. “With Veryx, we’ve got a powerful tool that finds even the most difficult-to-detect FM and defects. Among other things, we’ve virtually eliminated all Class 1 FM, which includes allergens like little pieces of almonds and walnuts that can come from neighboring growing fields. This is a game changer for us.”

“Veryx actually out-performs our old sorter in many ways,” added Mark Krause, Marysville plant manager at Mariani. “For one thing, our old sorter inspected product from the top only, so it couldn’t see every defect. Now, thanks to Veryx, we’re accomplishing all-sided surface inspection, which is essential for prunes since they can present defects on any side. With no blind spots, we’ve got a more accurate sort.”

“We’re also able to better maintain sort accuracy over our long production cycles,” added Krause. “Our old sorter got bogged down with product build-up, and that build-up could make the sorter fire its ejectors either too often or not at all. We would have to clean the old sorter during the production run, but that had problems too because when prunes get wet, FM tends to stick to good product. Quite frankly, it was a nightmare. But Veryx is designed specifically to minimize product build-up – it performs perfectly with no mid-shift washdowns.”

Prior to installing Veryx, Mariani had to size-grade on a separate line due to the old sorter’s limitations. Back then, they needed ten workers over two eight-hour shifts to keep pace with incoming product. Now, with Veryx, they’ve improved sort performance and increased sort capacity, which has enabled them to integrate sorting and grading on one line. This year, they’re producing the same volume of prunes in only one 10-hour shift with only six workers. “Reducing our labor requirements with world-class automation means we can give our full-time people a better work environment at the same time we need fewer seasonal workers, which is a huge relief in this tight labor market,” said Krause. “We need only one Veryx operator, and once he starts up the line, he can go do other things. Veryx basically runs itself.”

“Key’s remote monitoring service supports our in-house team and adds to our high confidence that we’re achieving peak performance. With remote monitoring on Veryx, a Key technician can access and adjust settings on the sorter remotely, if needed. Without it, we’d have to either make an appointment with an in-person technician or trade photos on email to troubleshoot a problem,” said Krause. “While we haven’t really had any problems or downtime since we started using Veryx, we did have the opportunity to use remote monitoring once, shortly after installation, to make a minor tweak to a setting. Key was able to make this small adjustment and optimize our sorter’s performance very quickly. Key’s customer service is always stellar. They take the time to really understand our environment and our goals.”

During their 7-8-month season, Mariani typically runs 13,000 to 14,000 lb of product per hour on their new prune sorting and grading line. Since Veryx C140 is rated to sort up to 20,000 lb of prunes per hour, they have room to grow. After the prunes are sorted and graded at the Marysville plant, they’re sent to Mariani’s Vacaville plant 70 miles away for further processing. Overall, Mariani is producing more than 300 million lb of fruit annually at five manufacturing facilities, offering Mariani-branded and private label retail packs as well as bulk ingredients to other food processors worldwide.

“Veryx is a more valuable tool than we anticipated. You see, the severe drought in California has brought new challenges. Recent prune crops are smaller than usual and the quality of incoming product has suffered. It would’ve been very hard for us to satisfy customer demand with our old sorting setup,” concluded Kennedy. “Veryx enables us to achieve our final product quality specifications despite wide fluctuations in raw product quality. At the same time, it also maximizes yield, improves efficiency and eases labor requirements. Our Veryx sorter is helping us accomplish all our goals.”