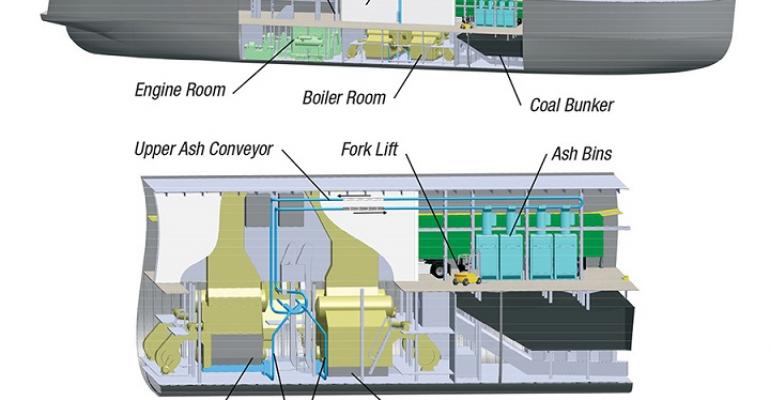 Based in Ludington, MI, Badger is a 410-ft passenger and car ferry that is the last coal-fired steamship in regular passenger service in the U.S. It is also the only Great Lakes vessel still operating Skinner Unaflow steam engines. Launched in 1952, Badger is recognized by both the Wisconsin Historical Commission and the Michigan Historical Commission as a registered historical site. The American Society of Mechanical Engineers has designated Badger’s powerplant a mechanical engineering landmark. And the National Park Service has designated her a National Historic Landmark.

EPA Ruling Mandates Coal Ash Containment
However, the Badger’s cachet as a historically-significant vessel faced a new reality. In 2008, the U.S. Environmental Protection Agency (EPA) amended the Clean Water Act with new regulations prohibiting the discharge of coal ash into public waters, historically a common practice for vessels like the Badger.

LMC explored a number of options to achieve compliance, including retrofitting Badger’s boilers for fuel oil or natural gas combustion. These approaches proved to be cost-prohibitive, so the next step was to explore onboard transfer of the coal ash from the boilers to easily-removable containment bins on the vessel’s car deck. Initial reviews of this approach quickly pointed to a potentially tough obstacle: physical space in Badger’s interior is limited, particularly in the complex engineering spaces surrounding the boilers and engine room. None of the transfer methods LMC evaluated offered a viable way to move material from the boiler collection points to the proposed car deck storage location. At that point, LMC faced the real possibility of being forced to retire Badger.

In the course of their initial evaluations, LMC officials realized that a possible approach might be a tubular drag conveyor system. These systems offer dust-tight construction, the ability to convey through bends, vertical conveyance capability, low wear and ease of maintenance.

Hapman Survey Confirms Space Problems
LMC was aware of Hapman’s reputation for providing custom material handling solutions, and also its expertise in tubular drag conveyor systems. LMC knew that Hapman could very well be the supplier that would provide the solution they needed.

Hapman engineers visited the ship dockside in Ludington to take initial survey measurements during an overnight period from 7 pm ferry arrival until the next morning’s 9 am departure. This initial encounter with Badger’s interior differed markedly from the original 1940s-era engineering drawings Hapman engineers had previously reviewed.

Space-Making Feats
Faced with a no-go, LMC engineering staff stepped in and proposed solutions to create the needed space, including reconfiguring a bend in a coal feed bucket conveyor, moving two large ventilation blowers in the boiler room, and literally routing a conveyor through a coal storage bin. With those modifications possible, Hapman engineers concluded they could design the conveyor system to be reliable, efficient, and configured for proper maintenance access, especially in confined spaces.

Designing Bends for Longevity and Efficiency
According to Hapman project engineer, Floyd Phalen, managing bends was a key design challenge imposed by the complex routing of the tubular drag conveyors. While bends allow tubular drag conveyors to do what other conveyors cannot, the addition of bends naturally increases chain pull (the amount of energy needed to pull the chain though the circuit). And as chain pull increases, so does the potential for wear. Therefore, minimizing the number of bends is always best.

The actual number of bends that can be included depends on where in the circuit they are located and whether the conveyed material behaves as an abrasive or a lubricant. Multiple changes in direction are common, but the most reliable circuits contain no more than 270° of bended pipe.

“This rule of thumb on bends was exceptionally important in the design of the Badger’s systems,” said Phalen. “Proper design and materials selection are always essential. For example, all carbon steel bend sections in the Badger’s system were heat treated to increase hardness and wear resistance. But you also have to be realistic and think of bends as wear parts. So, we worked hard to make sure system bends were minimized and as easy as possible to access and replace in tight confines.”

Selecting Flights for Different Operational Criteria
The flights, the individual disc-shaped parts attached to the drive chain that move material though the conveyor, must address two different needs in the ash handling system.

In the lower conveyors that move hot, abrasive ash from the boilers, key criteria include wear resistance and high temperature stability. For this part of the system, cast iron flights are used.

Higher up, at the car deck level, ash temperature is a much less significant issue, so UHMW (ultra-high-molecular-weight-polyethylene) flights were specified. UHMW is an engineered material that is abrasion and impact resistant. It is lightweight, has a low coefficient of friction, and is resistant to abrasion. These properties also reduce noise in operation, a valuable characteristic where the conveyor operates close to passenger areas in the Badger near the car deck. 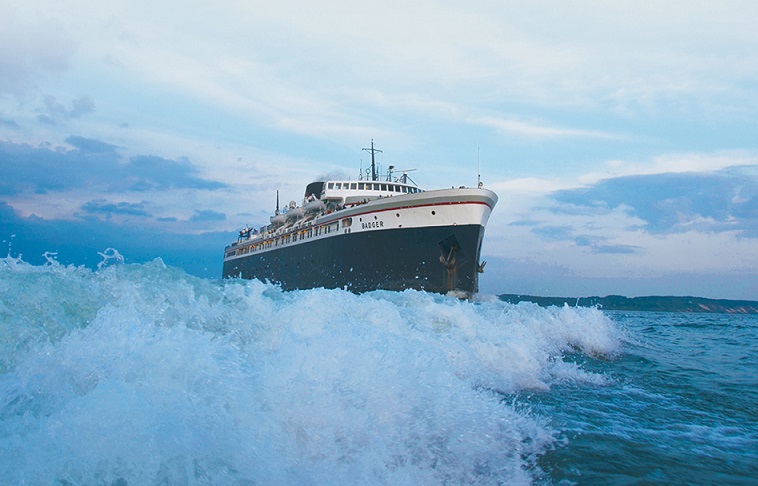 Time-Critical Process
“Time was the adversary throughout the project,” said Phalen. “We had only a few months to work with LMC to get the final system designed, approved and installed before the next sailing season. So, you can imagine how quickly and closely we needed to team up to keep the project on schedule.”

Hapman and LMC engineers collaborated on additional vessel survey work and final system design. Design drawings and documentation were submitted to the U.S. Coast Guard and the American Bureau of Shipping for review and approval before system fabrication could commence at Hapman facilities in Kalamazoo.

Systems like the Badger’s are typically factory-fabricated, flange-connectible components ready for field assembly. Once the components arrived in Ludington, LMC staff cut appropriate access holes in the ship’s decking and interior spaces to allow final assembly.

There are two opposing pairs of boilers on the ship. Each has two doors from which bottom ash is raked. Two tubular drag conveyors--each consisting primarily of 6-in. schedule 40 carbon steel pipe--are situated beneath those doors, running the full beam, closely following the profile of the hull up into the high reaches of the boiler room and back again in a rectangular loop configuration. These collection loops are inclined toward each other and have a single point discharge in the middle of the upper horizontal run.

At the discharge point, the ash transfers into a third tubular drag conveyor that is configured roughly in an inverted “L” shape. The collection loop at the bottom of the inverted “L” circumnavigates the two inclining rectangular loops and collects ash via a single converging inlet. From there, the conveyor extends vertically out of the boiler room up into and above the car deck, turns forward and runs horizontally down the midline of the ship dispensing ash automatically into one of four ash containers located midline and between the stanchions there.

There are two other sources of ash handled by the conveyor system. Each boiler is equipped with an economizer. These have a Hapman bar-flight drag beneath them alongside and inboard of the boilers that transfer and discharge ash into the inclining rectangular loops. Also, stack ash is collected and chuted into the inverted “L” near the intersection that collects from the inclining rectangular loops.

The network of tubular drag conveyors includes a total of 505 ft of chain and pipe with a peak instantaneous capacity of 6 cu ft/min of 350°F ash, weighing as much as 22 lb/cu ft (average volumes are a fraction of that amount). Overall, this high-torque, low-speed system requires only 32 total hp.

An Effective Environmental and Business Solution
Since installation, the ash handling system aboard the Badger has been performing as designed. After each round trip, full ash bins are removed from the Badger with a fork lift and the material is transferred to a St. Mary’s facility that uses it for cement production.

While the ash handling system is one of many upgrades that Lake Michigan Carferry has undertaken to reduce the Badger’s environmental footprint, it is certainly the most critical step LMC needed to take to keep her compliant and crossing the big lake for the foreseeable future.

“Like no other project I can remember, this one stands out as one that combined the expert application and design of Hapman conveyors with an unrelenting, ambitious and capable customer,” said Zerbel. “When both teams step up with a collaborative, resourceful spirit, viable solutions can be found for “impossible” material handling challenges.”

Hapman has been developing conveying systems for more than 70 years. The company has more than 10,000 installations worldwide in the chemical, food, pharmaceutical, plastics, building, minerals and other industries. For more information, call 269-343-1675 or visit www.hapman.com.