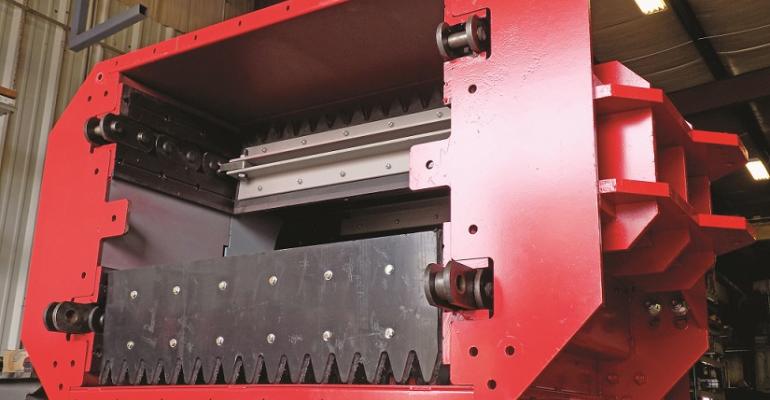 Drag conveyors are ideal for transporting homogenous, bulk material, but they vary widely in terms of quality. Many drag systems still resemble models from the 1800s, when they were first invented, while others showcase developments that have made these machines more reliable and more profitable. Understanding these developments will help you identify material handling solutions that will enable your plant to operate more smoothly and profitably and avoid out-of-date machinery.

Development of the Drag Conveyor
It was near the end of the 18th century that engineers first developed the conveyor. Composed of leather or canvas belts that ran over wooden frames, these hand-powered machines were primarily used to move agricultural goods at port. Engineers further developed conveyors in the 19th century by employing steam power. In this century, engineers also invented the drag conveyor, also called a chain conveyor, flight conveyor, or paddle conveyor. Consisting of little more than a chain with steel bars (flights), these machines were ideal for moving dense, bulk materials like wood waste.

In the 20th century, engineers added paddles to the flights. Paddles allowed drag conveyors to move larger loads at steeper inclines. They also provided a fail point if an obstruction occurred. With a flight-only design, if the flight failed, the next thing in line to break was the chain or sprocket. By using paddles, maintenance crews had something to observe before the flights broke—the paddles would bend backwards when they met an obstruction. If checked regularly by maintenance crews, personnel could thus identify an obstruction before it got worse.

Engineers also developed the twin-chain drag system in the 20th century. These systems employed two chains instead of one to move material. These systems didn’t necessarily look much different than single-chain systems. The chains ran on the bottom panels, and they had the added problem of keeping the chains aligned (as material packed on one, increasing friction there, the parts wore faster on that side).

Engineers further bettered drag systems by equipping the paddles with ultra-high-molecular-weight polyethylene (UHMW) to decrease friction and wear. But the basic design of most systems remained the same.

Now in the 21st century, the lack of innovative change poses a problem for producers who want and need machines with better reliability, increased efficiency, and lower operating costs. While chain-in-a-box conveyor was innovative for the 19th century and met manufacturers’ needs in the 20th, it doesn’t meet the needs of today’s climate: operational costs have gone up, labor is tight, and survival in many sectors depends on peak performance.

Friction and Wear
Inefficiencies in the traditional drag chain design largely stem from internal friction and wear. In the standard design, the chain drags the paddles over the bottom panels of the conveyor. While doing such, the chain and paddles rub the floor panels and sidewalls. Energy that should move material is therefore used to overcome this resistance. The rubbing also wears the panels, the chains, and the paddles. As a result, personnel must commonly replace the panels whenever the chain needs replaced, and the paddles become less efficient over time.

Single-Chain Design
Chain life is another problem with the traditional design. Of all the components of a drag conveyor, the chain usually draws the most attention and monetary investment. This is because the chain takes the brunt of the forces and because it’s worn by the material it transports. The fact that the traditional design calls for a single chain as opposed to twin chains doesn’t help, either.

There are several problems with a single-chain model. The first is that the chain is almost always dragged through the material its conveying. Doing this exposes the chain on all sides to acidic, corrosive, and mechanical wear. It also allows the chain to easily grab the material and pull it around the sprockets. The material will thus increase mechanical wear at the sprockets, where the majority of chain wear occurs. If a large-enough piece of material gets caught between the chain and sprocket, the chain can fail.

Second, the chain in a single-chain system tends to wear faster than those in a twin-chain system because the chain is easily tweaked (in flat-bottom conveyors, at least). Conveyor troughs rarely receive material evenly across the conveyor’s width, although doing so is ideal. As a result, the majority of the material tends to pack on one side of the conveyor. Because the paddles are thus unevenly loaded, they tweak the chain as it pulls the paddles, causing the chain to wear mechanically. Tweaking the chain also decreases efficiency, as the uneven paddles don’t move up the conveyor smoothly.

Twin-Chain Conveyor Advantages
A single-chain setup isn’t the only design available for conveyors. Twin-chain systems are available. Despite the problems manufacturers sometimes encounter with these systems, they offer a number of advantages over single-chain conveyors, especially when designed well and properly maintained. Twin-chain systems distribute the load onto two chains, thereby increasing chain life. By distributing the load, conveyor manufacturers can more easily incorporate standard chains, which decreases replacement costs and makes sourcing replacement parts easier. Twin chain systems also have less trouble with uneven loads. While manufacturers should do their best to load conveyors evenly no matter their system, unevenly loaded conveyors aren’t as much of a problem in twin-chain systems, as the two points holding the paddles better keep them from twisting. 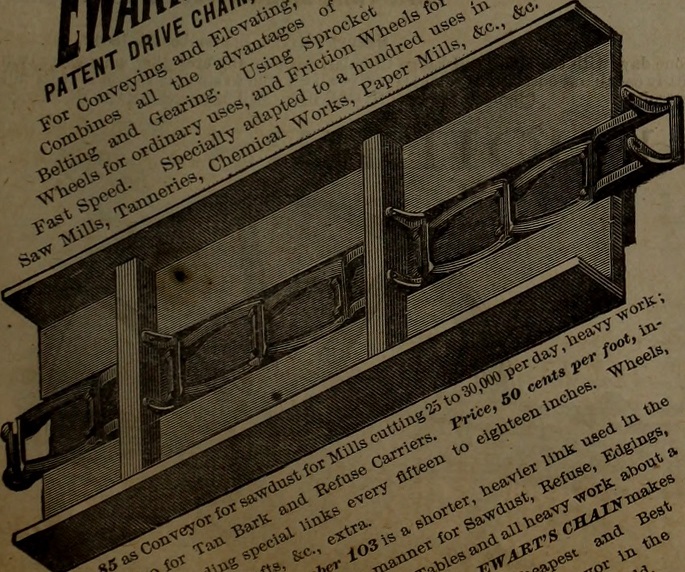 Like with single-chain conveyors, paddles in twin-chain conveyors are an initial fail point: manufacturers can identify obstructions by observing the paddles rather than waiting until a dramatic (and expensive) failure occurs to discover a problem.

Recent Advancements in Drag Conveyor Design
While many drag conveyors still employ a single-chain design, and while the overall scheme of a drag conveyor wasn’t revolutionized in the 20th century, there have been a few manufacturers who have made smart advances in drag conveyor technology in recent years. Major changes include:

By running the chains in troughs outside the material path, the chains are spared some of the acidic and mechanical wear that comes from contact with material. It also reduces the amount of material that collects in the chain and gets wrapped around the sprockets. It furthermore keeps the chains off the bottom panels, where they will wear through them. Another advantage to this design is that it better keeps the paddles from twisting if they’re loaded unevenly: in a channel, there is little room for the chains to twist.

Running the chains on UHMW wear strips reduces the amount of friction inside the conveyor. It also reduces maintenance costs. It costs much less to replace a UHMW or nylon wear strip than it does a steel panel—not that replacing these wear components in modern drag conveyor is difficult or something that occurs frequently. Wear strips in straight sections incur little wear, as the forces in the chains are primarily horizontal. When they do need replaced, the best systems allow you to do so with the chains under tension. Curve wear strips in these systems can be replaced from outside the conveyor without opening any panels, which decreases downtime.

Other features in advanced conveyors help decrease downtime. These features include three-piece split sprockets. Two-piece split sprockets sound like they should allow you to replace the sprocket without breaking the chain, but in reality, teeth in part of each side of the two-piece sprocket will grip the chain, so maintenance personnel may have to break the chain anyway. Three-piece sprockets truly allow personnel to replace the sprockets without breaking the chain.

In terms of paddles, by keeping them off the floors and sidewalls, advanced conveyors offer a tremendous reduction in friction and wear. Smart manufacturers learned to compensate for the tendency of some material to wedge in the gap under the paddles by adding fingers to their paddles. Coarse material thus packs between these fingers instead of under the paddles. For material that isn’t so coarse, these fingers can be altered so the paddles look like piano keys.

A benefit of the finger design is that it adds another fail point. Maintenance personnel can first observe an obstruction in the fingers. When a finger hits an obstruction, it bends. Only then, if the obstruction becomes worse, will the paddle bend or break, then the flights, then the chain or sprocket.

Because drag conveyors have evolved more slowly than other types of conveyors, many manufacturers don’t think to look for better systems. They assume there’s not much difference between conveyor A and conveyor B; both will perform poorly, they think. But reliable, highly efficient, high-ROI systems have been developed. Producers who understand this will be able escape the money pit of an outdated conveyor system and make a smart purchase.

Here are links to some of our most popular mechanical conveying articles:

Tubular Conveying is Not So Obvious Until You Look Inside