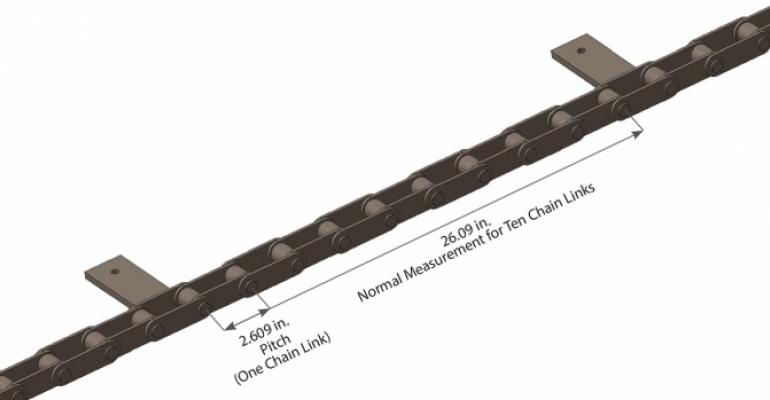 In drag chain conveyors, chain usually constitutes the majority of maintenance expense in labor and parts. This is true for the best conveyors and especially for poorly designed, poorly maintained systems. But there are ways to increase the efficiency and lifespan of chain to lower operational costs and provide a better return on your investment. These range from the obvious (performing maintenance) to the extreme (complete system replacement). They’re worth investigating—unplanned downtime from chain failure often costs more than the labor and parts combined, and it’s a headache you neither want nor need.

It should go without saying that the simplest way to maximize the life of a conveyor chain is to perform regular, preventative maintenance per the manufacturer’s schedule. While you likely understand the importance of preventative maintenance, you need to keep in mind that, in reality, maintenance personnel often ignore conveyors until they’re throwing tantrums like a neglected child. Ignoring conveyors will increase the cost of labor and maintenance, and it will reduce their efficiency. Your maintenance crew needs to perform upkeep if you want improvement in operational costs related to your conveyors. Even upgrading your conveyor to a better designed unit won’t do much good if it’s neglected.

Replacement
Of course, no matter how much preventative maintenance occurs, you will still eventually need to replace the conveyor chain. Maintenance personnel should be able to tell when this needs to occur so your operation doesn’t encounter unplanned downtime. Technicians can tell when a chain needs replaced by measuring the amount of stretch (wear) in the chain, which they accomplish by taking the average pitch over a number of chain lengths. Generally, if the average pitch is three percent or more of the rated pitch, they should replace the chain.

You may be tempted to continue running a chain when it has stretched three percent past its rated pitch to “extend” its life, but you will not get “extra” mileage out of it. Think of it as running a vehicle when the fuel is near empty: running it longer doesn’t change the distance it will run before it peters out. It just increases the likelihood that you will get stranded on the motorway. The difference between your conveyor chain and a car, however, is that your chain will not peter out. It will snap, and you will incur unplanned downtime. Worse, by waiting until the chain breaks to replace it, you risk damaging the paddles, paddle frames, sprockets, shafts, motor, and other components. It’s better to replace a chain during scheduled downtime than during an emergency.

Chain Wear
A key to extending chain life between replacements is to address chain wear. Under normal operating conditions, chains fail at the pin. This occurs in spite of the fact that the weakest point in a new chain is the sidebar. Why the pins fail instead of the sidebar is that wear weakens the pin over time so that eventually it becomes the weakest point in the chain. Because its strength continually decreases, the normal operating load eventually exceeds the pin’s strength, and it breaks. Since the pins are case hardened to allow for impact resistance, the three percent indicator is designed to keep you from getting through the hardening. Trying to run past three percent can get you into the soft steel inside the hardening and then the wear become exponential. It’s a time bomb waiting to explode at that point. There is no way to run beyond three percent and be safe. It’s usually only when a conveyor encounters an obstruction or is overloaded that the sidebar breaks. If you encounter this type of break under normal conditions, it may indicate you’re using too light a chain.

In general, the higher the chain’s ultimate strength compared to the actual load, the better in terms of the chain’s lifespan. To further increase chain life, it also helps to have larger pins due to the wear process described above. The larger the pin, the longer it will take before that pin weakens to the point of failure.

Pin size is especially important when conveying corrosive and abrasive materials. Fine abrasives remove oxidized metal around the pin to expose unoxidized material to the corrosive elements, speeding the corrosive process. The process further accelerates as the flaked off rust becomes a grit that adds to the pin wear.

The tradeoff when purchasing chains with large pins is that they will cost more up front than standard chains. The ROI of such chain makes them worth considering, though: you can afford a chain that costs twice as much if it lasts two years instead of one.

Other changes to reduce the effects of corrosion on chains will require you to invest in a different conveyor system. A system that runs its chains in troughs outside the material path, for example, has an advantage over a system that runs them on the floor of the conveyor, which deluges them in the material and lets them pull and grind material over the sprockets (not to mention drop it on the underside of the conveyor).

Friction
Another enemy of chain life is friction. Friction works to decrease not only chain efficiency but the efficiency of the entire conveyor system. In drag chain conveyors, friction loads are often quite high, as many single- and double-chain conveyors run the chains and paddles along the conveyor floor and sidewalls (hence the alternative name of “scraper conveyors”). This high load means the system is using more power to overcome its own internal friction and less to move material—hence it is less efficient. The chain, too, works less efficiently in this situation, as more of its working load is applied to dragging itself and the paddles through the trough. As a result, the conveyor may require stronger and more expensive chain.

Addressing internal friction issues will require you to swap your existing conveyor for a better one, as reducing friction largely requires a change in design. For example, getting the chain out of the material path will help extend the chain life, as it will reduce the amount of material to which the chain is exposed.

We argue that design changes are necessary to decrease friction because improvised solutions do not typically work well. For instance, we know of an operation that attempted to decrease friction and wear in his chain conveyor by placing UHMW sheets under the chain. At first, it seemed to work well. Then the temperature changed. Because UHMW has a high thermal expansion coefficient, the sheets warped. It was impossible to keep material from getting under the liner and causing more problems. In the end, the operation removed the sheets.

The point here isn’t that UHMW does not work in conveyors. It does—we use spaced UHMW wear strips in the channels through which the chains run in our conveyors. Rather, the point is that changes to a conveyor’s design must be thought through. There are no “simple fixes” to decrease friction in a conveyor once it’s manufactured and installed.

Loads
How a conveyor is loaded and how it carries the load also affect chain life, especially in conveyors with a single drag chain and flat trough. When loading a conveyor, it’s important to distribute the load evenly across the trough. A conveyor with a single chain that is loaded unevenly will pull to one side and tweak the chain, causing additional wear. This happens in single-chain paddle conveyors regardless of how the trough is loaded, as the load is never perfectly distributed across the paddles. But when the load distribution is uneven to an extreme, it exaggerates this problem. Uneven loading isn’t as much a concern in twin-chain paddle conveyors, as the chains hold the paddles on either side and so better resist twisting, and depending on the material, the load may distribute over the paddles more evenly as it travels through the conveyors. Still, uneven loads can cause one chain in twin-chain systems to stretch faster than the other, which will result in crooked paddles and uneven wear.

In terms of load density and volume, you will get more out of your chains when you keep the working load as low as possible in comparison to the chain’s ultimate strength. Light loads at low volumes will wear a chain slower than heavy loads at a high volume. It’s the same as with exercise: just as you can travel farther jogging than sprinting, a chain will last longer if it’s running at 40 percent of its capacity than at 90 percent. When you run a chain high into its working capacity, it also increases the risk that the chain will snap when an overload situation occurs.

Besides specifying the conveyor chains for a low working load, you should also run your conveyors as slow as possible. Sprockets are a steady source of mechanical wear on chains, so the fewer times a chain must run over them, the better. And running the chain slower has other advantages. Panels, paddles, and bearings incur less wear.

Running the chains slow will increase the load on the chains, however, as more material will be in the conveyor at a given time than if the chains were running quickly. There is certainly a balance between speed and maintaining a low working load. Of the two, we suggest it’s more important to keep the working load low than it is to run the conveyor slow, but with a well-designed conveyor, it is usually possible to achieve both.

Design
In terms of design, you should first ensure your conveyor is spec’d right before signing the purchase agreement. This seems obvious, but we’ve encountered systems that run at 90 percent capacity while empty. You can imagine what happened when the conveyors were loaded. The chains snapped, and the mill with these conveyors soon closed because it could never get production up to a profitable level.

Keep this in mind when purchasing chain, too. You may be tempted to buy a cheaper chain (or cheaper conveyor system as a whole), but if it will result in poor performance and lost production, it is not worth the short-term savings.

Something else to keep in mind during the design phase is that it’s best to minimize or eliminate the number of curves in the conveyor. Whether you’re looking at a tubular drag system or traditional paddle conveyor, curves are a point of wear and strain. By running a conveyor at a 45° angle or less, you can eliminate the need for a curve at discharge.

Conclusion
Picture for a moment a chain conveyor that utilizes welded steel drag chain—a system we call a “chain-in-a-box” conveyor. It looks little different than its 19th century predecessors. It looks no different than its predecessors a century ago. This conveyor highlights every issue discussed in this article. The chain runs through the materials and drags it over the sprockets. The steel-on-steel friction between the chain and trough reduces efficiency. Maintenance will help extend the life of its chain, but it will not make the conveyor more efficient that it was at installation.

For big improvements in performance, you will a smarter design that reduces friction, reduces wear, and maximizes the working load of the chains. It is possible to reduce operational costs of your conveyors. It just takes some investment and time up front.