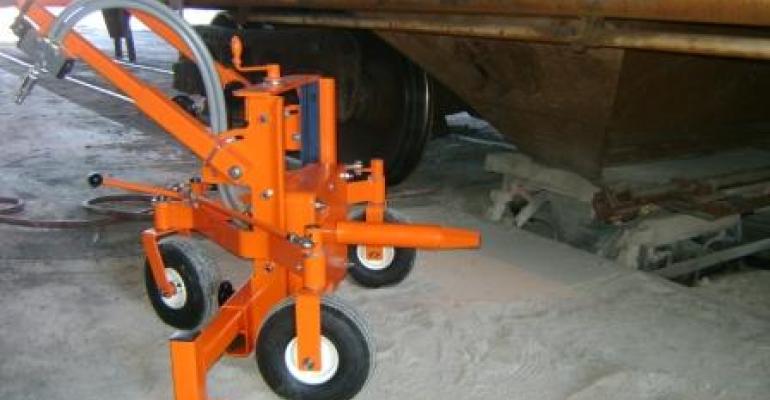 The CEMEX Sacramento plant opened in 1999 and supplies cement for concrete and ready-mix operations throughout central California. Cement is delivered to the terminal by rail from the firm’s California manufacturing facilities, either from the Victorville plant, roughly 400 miles (640 km) away or from the Davenport plant, a trip of about 165 miles (265 km).

Four times a week, the terminal receives trains of 40 railcars. Unloading proceeds around the clock -- one car every 40 minutes -- until all cars are emptied and the train returns to the manufacturing plant for another load. To keep the trains in motion and the terminal’s five silos full (total capacity of 8500 tons), each railcar needs to be opened and emptied without lost time or risk of injury.

Terminal manager Don Wilkey realized the consistent problems opening the discharge gates of the bottom-dump hopper cars was slowing down the process. “The weight of the cargo load against the discharge gate was making the gates very hard to open,” he explained. The plant needed a system to assist in opening the gates, without the backbreaking labor of using a bar or requiring the unloading crew to crawl underneath the car.

Wilkey contacted a representative from Martin Engineering, who recommended the company’s rugged, air-powered railcar openers, which can open even the most stubborn hopper car gate with 2500 ft-lb (346 kg-m) of torque at 90 psi (6.2 bar). The adjustable base allows one worker to maneuver the wheeled cart through tight spaces, improving loading efficiency while greatly reducing safety risks for personnel.

The height-adjustable unit can accommodate different car gate designs and variations in unloading platforms. Three 10 x 4 in. (25.4 cm x 10.2 cm) pivoting pneumatic wheels allow the unit to maintain contact with the traveling capstan of rack and pinion gate openers, while stabilizers slide out to provide a wide base for increased leverage. A steel tube frame delivers long life under tough, “real-world” conditions.

The smooth, non-impacting force opens gates without costly damage, yet is able to operate from a minimal air supply of 20 cfm (566 l/min) and with noise levels measured at just 83 dBA at the operator’s position (one meter from the air motor muffler).

"The Martin railcar opener is a great piece of equipment,” Wilkey continued. “We have two units -- one at each of our unloading stations -- so we can open several cars quickly. Our unloading crew would sure hate to try to get along without it. We think it’s the best door opener on the market, bar none.”

Martin Engineering also offers railcar connectors to funnel material to the under-track system to prevent wind loss and eliminate the safety hazard of requiring workers to crawl under the car.

Installed between the tracks, Boot-Lift connectors form a link between the railcar and a plant’s under-track conveying system. Powered by air, they raise the unloading boots to the gates for clean, efficient, and safe unloading of bottom discharge hopper cars.

CEMEX is a global building materials company that produces, distributes, and sells cement, ready-mix concrete, aggregates, and related building materials in more than 50 countries. Founded in Mexico in 1906, the company’s U.S. network includes 13 cement plants, 46 strategically located distribution terminals, more than 100 aggregate quarries, and more than 450 ready-mix concrete plants. CEMEX USA was named the EPA Energy Star Partner of the Year for 2009 and 2010.