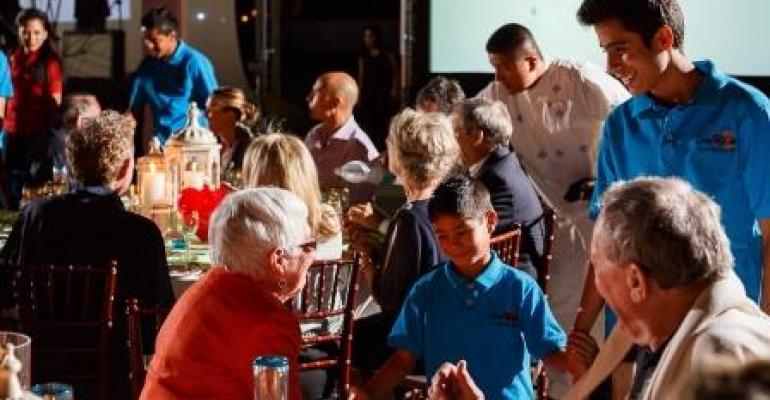 With the theme of “Healing Hearts, Building Futures,” the benefit was held at Las Ventanas al Paraiso (which translates as “windows to paradise”), one of the premier luxury resorts in all of Los Cabos. The significant support from Martin Engineering and its shareholders helped raise more than $500,000 for the boys of Casa Hogar, by far the organization’s most successful event ever.

With a capacity for 60 residents, Casa Hogar is currently home to 41 boys between the ages of three and 17. Although most are received from state or federal agencies, the facility receives no government support. Opened in February of 2008, the registered non-profit organization is privately-funded, maintained solely by donations, fundraisers, and special projects. A staff of 18 covers three shifts, 24/7.

Orphanage officials say the funds come at an especially critical time, as the organization continues its planning to establish a girls’ facility to support additional children in the community. Among the other developing projects at Casa Hogar is a “Post-18” program to help all residents find their way to a rewarding future.

Amy Abbott has been one of the co-chairs responsible for organizing all four of the events through her company, Amy Abbott Events (www.amyabbottevents.com). “The first fund-raiser was held at a private home in 2011,” she recalled. “We were able to raise $100,000 as a result of that effort, and it has turned into an annual affair that has grown each year.”

More than 200 people attended the 2014 gathering, where they were able to choose from an extensive buffet of international food and beverage options, all provided by the resort’s staff. Entertainment came from a local nine-piece band of professional musicians, who treated guests to a broad range of Latin American and international songs.

“We help support all of the regions where we do business,” said Martin Engineering global business development director Alvaro Chacon Prieto. “Our corporate philosophy has always emphasized community service and civic responsibility, right from the company’s founding in the 1940s.”

Casa Hogar’s mission is to show its residents a pathway to success, preparing them for life with a family and helping them grow into productive citizens by providing safety, healthy sustenance, life skills and leadership. The staff stresses education in academics and social skills, as well as moral and religious values, helping young people to achieve a productive place in society and flourish in the 21st century.

Los Cabos is a municipality located at the southernmost tip of Mexico's Baja California Peninsula, in the state of Baja California Sur. It encompasses the towns of Cabo San Lucas and San José del Cabo (the municipal seat), as well as the resort corridor that lies between the two. The remarkable setting where the sapphire Sea of Cortez meets desert and mountains is unique to Los Cabos, drawing millions of visitors each year to its warm, temperate climate with 300+ days of sunshine each year and an average annual temperature of 78°F.

Martin Engineering has been an employer and supplier of bulk material handling technology for more than a quarter-century in Mexico, and is a frequent patron of such fund-raisers. The company supplies bulk material handling equipment around the world for a wide variety of applications, including mining and coal handling, biomass, cement, aggregates, and other materials.