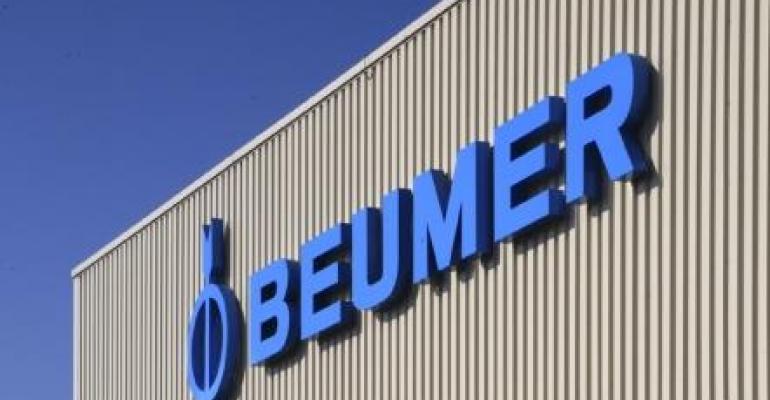 As Beumer Group celebrates its 80th anniversary, the company continues to concentrate on its core business capabilities, to be innovative, and to consistently pursue its strategic policy of globalization. A considerable portion of credit goes to the shared values of this family-owned company. They are the basis for the system provider’s successful integration of 4100 employees, each of whom comes from different cultures and backgrounds, and of those, in particular, who have joined the group as a result of its corporate acquisitions.

With innovative system solutions for intralogistics in conveying and loading technology, palletizing, and packaging technology, as well as sortation and distribution systems, Beumer has established a position as a leader in the world market. These solutions are applied in various industries such as cement, lime and gypsum, agriculture and mining, chemicals, pharmaceuticals, energy, and food and beverage. "We can only achieve a high level of customer satisfaction and a sustainable, successful market presence when the whole team is involved in the corporate strategy in the long term," said Dr. Christoph Beumer, chairman and CEO of Beumer Group, who has been managing the family business since 2000, now in the third generation.

Just how innovative and successful this mid-sized company is, has now been extensively documented in the latest edition of the compendium of German world market leaders "Lexikon der deutschen Weltmarktführer", issued by the business press publisher Deutsche Standards EDITIONEN.

It All Started with an Idler
On December 9, 1935, the 33-year-old Bernhard Beumer started his first work day as an entrepreneur with four employees. Until then, he had been working for a conveying technology company in Essen. One of his most important seed assets, aside from his courage and determination, was the experience he gained as a repair mechanic for conveying technology, working in the mining industry in the Ruhr area before completing his degree in engineering. Beumer had long entertained the idea of being independent and founding his own business. When he learned that a vacant factory building in his hometown of Beckum was up for sale, he seized this opportunity. The classic conveying technology formed the foundation of his business.

The entrepreneur starts from scratch. As a young senior engineer, he knew the business, as well as the customer's needs. Already when founding his new company, he brought with him his first orders from the building materials, cement and mining industries. A considerable step towards the success of Beumer conveying technology was his development of the idler with labyrinth seal. The founder of the company had this innovation patented and integrated it further into other products. From this idler, he derived the company logo which is still used today: The circle represents the cross section of the idler's tube, the arrow is the idler axle and its direction of running. The company continued to grow, employing about 100 people at the outbreak of the Second World War.

The Son As Successor
Not only the company founder, but also his eldest son bears the name Bernhard Beumer. It was an obvious choice for the son to follow in his father's footsteps. After completing studies in mechanical engineering, he worked at his father's side for 18 years and took over the company after his father's death in 1981. In the field of conveying technology, he particularly pursued the development of bucket elevators. He quickly realized that a chain as a traction element was too heavy. Its net weight cancels out a major portion of its tractive force. By this time, Beumer was already an expert in belt conveying technology. This gave Bernhard Beumer the idea of using a belt as the traction element for bucket elevators. He used a belt with steel wires to ensure that the buckets are reliably fixed to the belt. He arranged the steel wires so that there are wire-free zones. Holes can be punched into these zones to fasten the buckets tightly to the belt.

With these bucket elevators, Beumer created a conveying technology that allows for considerably higher speeds and greater center distances. Beumer’s current belt bucket elevators allow center distances of 178 m or more. By the mid-1980s, the supplier had installed about 100 systems altogether, in 2007 and 2008 there were about 450 installed per year, worldwide. Besides the product development in the field of conveying technology, Bernhard Beumer Jr. also continued the initial development of loading systems and set Beumer on a decisive path for the globalization of the group, founding companies in Brazil, the U.S., and Asia.

On Any Terrain - Curved Belt Conveyors
In the 1960s, Beumer laid the foundation for curved belt conveying systems. The first theoretical designs on the market were from the company's Department for Research and Development. Today this group is one of the technological leaders for these systems, either as troughed belt conveyors with open design or as pipe conveyors. One particularly impressive reference project is the 12.5 km long troughed belt conveyor in the Chinese province of Sichuan, which was put into operation in 2008 and currently conveys about 2200 tons of limestone from the quarry to the cement plant. Its routing features several vertical and horizontal curves. The system traverses 1.5 km of water surface and extensive bamboo forests, and can overcome height distances of up to 100 m. For the same project, Beumer Group has now been awarded the contract to supply and install another conveyor of similar size, and the customer is already planning a third expansion phase.

No More Heavy Lifting
In the field of loading technology, Bernhard Beumer Jr. developed new products, such as the three-dimensional loading machine for loading cement bags onto trucks. This relieved the physical burden of the workers. In the 1970s, the engineers further developed this machine until it became completely automated. The stationary palletizer is a result of this development. Today, the Beumer paletpac stacks paper, PE, and PP bags on pallets of different sizes in a flexible, precise, and stable way. Depending on the product requirements, it can be equipped with a clamp-type turning device or a twin-belt turning device. The latter allows gentle, fast and precise stacking of bagged bulk material on pallets. The Beumer stretch hood is a well-proven, high-capacity packaging system that then packages the palletized stacks efficiently and economically. This technology has been optimized further in regards to functioning, economic efficiency, and ergonomics. Since its introduction, Beumer's customers have responded very positively to this system.

The Third Generation
Since 2000, Dr.-Ing. Christoph Beumer, the founder's grandson, has been managing the company. "The success is primarily due to the familial spirit. We have consistently held to our motto 'We are looking for the long-term success, and not for the short-term profit'," he says. Beumer ensures the long-term success of the company through manageable growth, a large range of products, and a global market presence. Beumer machines and systems are in use all around the world. The group consistently pursues its globalization, by setting up local group companies, and even local production facilities in China and Thailand. The result: the company has exhibited extremely stable organic growth over the last several years.

Undeterred by the impending financial and global economic crisis, Beumer took over the Danish sortation technology specialist Crisplant in 2009, followed later by companies in India, the U.S., and Belgium. With its acquisition of Enexco Technologies in India, a manufacturer of grinding systems and packaging machines for the cement industry, Beumer has reinforced its presence in vital markets and simultaneously systematically expanded its portfolio, without abandoning its traditional segments. And what about the integration of the very diverse cultures? The CEO views this as a chance to learn from each other. "We want to create a working environment where everyone respects each other's individuality," emphasizes Dr. Beumer. And due to the fact that the local employees in the group companies speak the same language as their customers, the customers feel understood. This creates a high level of customer retention.

Becoming a Single-Source Provider
In order to be able to fill bags with bulk materials such as cement, mortar, or gypsum, and therefore provide entire packaging lines for the building materials industry, the Beumer fillpac, a filling system was introduced to the market in 2013. Users can flexibly integrate and adapt it to existing packaging lines.

More Than Just Service
BEUMER does not only provide and install machines and systems. With highly capable specialists deployed around the globe, the company also ensures trouble-free operation worldwide. Beumer Group has established a fourth, independent business unit, in the form of its customer support unit. The group thus ensures high levels of availability for its customers' machines and systems. Its specialists take care of the customer, starting with the first project discussion, up until the system is in operation. Customer support offers various service agreements that are matched individually to the respective needs of the customer, including service intervals and response times as agreed by contract. The agreements can range from maintenance and inspection to a long-term placement of service personnel on site. Within the framework of its wide reaching customer support business, Beumer Group also provides residential service. It enables logistics service providers to delegate the responsibility of availability, performance, and profitability of filling, palletizing, and packaging installations to Beumer specialists. The single-source provider has extensive experience and knowledge of technical and logistics matters in the chemical industry, helping ensure the high efficiency of their machines. In order to provide trouble-free operation, Beumer employees come to customer sites worldwide, even long-term, if required.