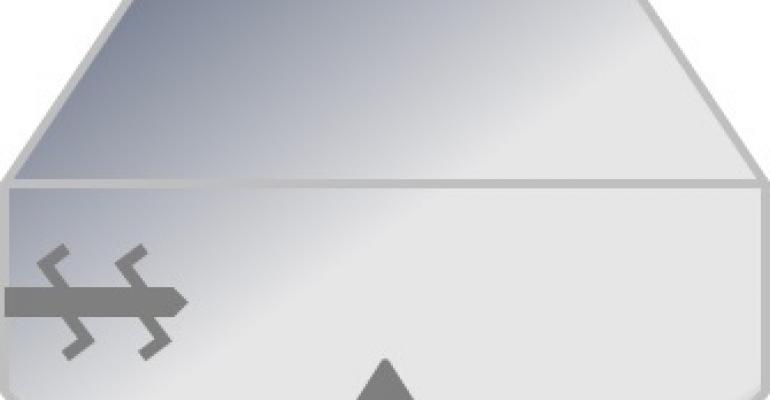 The process of granulation offers manufacturers valuable opportunities to closely engineer the properties of a finished product, to increase bulk density for efficient packaging, for instance, to control solubility or dispersibility, or simply to improve appearance and/or ease of use. Furthermore, it is equally useful for improving the performance of intermediates. In the manufacture of pharmaceutical tablets, granulating an active/excipient blend produces a stable, optimized feed for the tablet press that is relatively free-flowing and resistant to segregation.

The successful application of granulation calls for an effective strategy for granule evaluation. This article highlights the value of uniaxial powder testing in this context, introducing the technique and discussing its merits compared with traditional powder testing methods. An experimental study demonstrates the ability of uniaxial testing to efficiently provide useful information for granulation optimization.

Wet and Dry Granulation
Granulation -- the agglomeration of fine particles into larger granules -- can be carried out either in the presence or absence of water. In dry granulation -- typically roller compaction -- the application of a mechanical stress forces particles closer together, squeezing out entrained air to form a stable compact that is milled to produce granules with the required properties. Dry granulation is particularly suitable for materials that are sensitive to moisture and/or heat and for fine cohesive powders which tend to be highly responsive to compression.

However, wet granulation is generally more widely applied, primarily because of its flexibility and suitability for a much broader range of materials. In wet granulation a liquid binder -- usually water -- is added to promote cohesion of the fine particles. Liquid wetting of the surface of particles forms bridges between them that become more pronounced as liquid levels increase. The resulting liquid bonds solidify upon drying to produce stable granules that may subsequently be milled to a final specification. 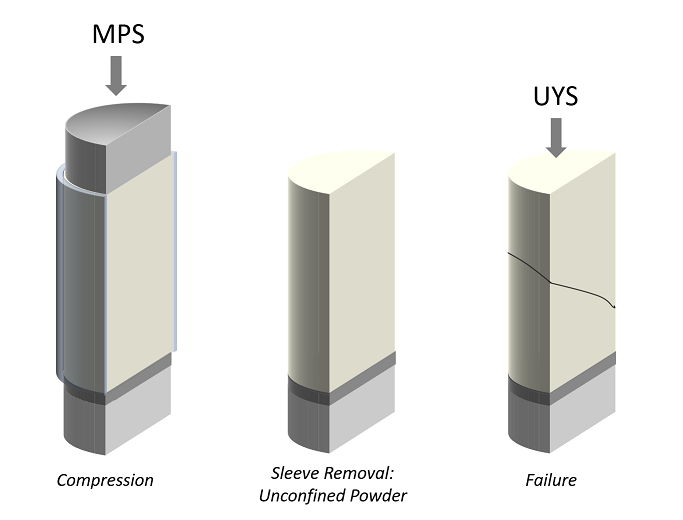 High Shear Wet Granulation (HSWG) technology – batch or continuous - is a popular choice for wet granulation applications (see figure 1). It offers short processing times and minimal binder use, producing denser less friable granules than low shear processes. In a continuous process the primary variables used to control the properties of the exiting granules are the amount of water added, screw speed, and the powder feed rate. The amount of water added is also an important variable in batch processing, but other control parameters include impeller and chopper speed, granulation time, and water addition rate.

Controlling a HSWG to a successful conclusion relies on being able to reliably and meaningfully assess the quality of the resulting granules. Particle size measurement is a common approach but is often less than optimal. The goal of granulation is typically to change the bulk properties of the powder, most often to improve flowability. Where this is the case particle size data alone cannot reliably differentiate good from poor-quality granules and measuring flow properties is a more effective way of defining granule quality. 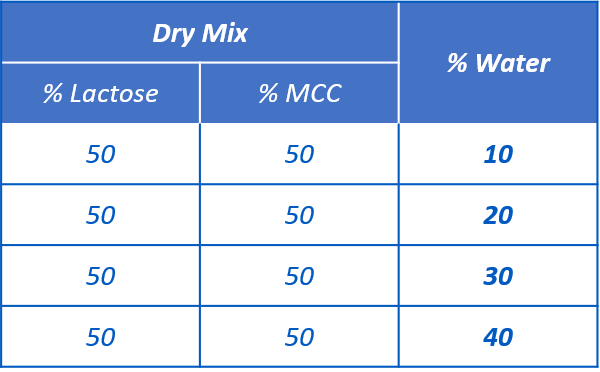 Introducing Uniaxial Flow Testing
Uniaxial testing ranks the flowability of powders from direct measurements of uniaxial Unconfined Yield Strength (uUYS), a parameter measured using the simple procedure illustrated in Figure 2. The first step involves constructing a uniformly consolidated powder column by loading the powder sample into a cylindrical sleeve and applying a defined Major Principal Stress (MPS). Reducing the applied stress, effectively to zero, and removing the sleeve results in a free-standing powder column. The stress at which this column fractures, upon further application of a compressive force, is the uUYS of the powder. More cohesive powders have relatively strong inter-particular forces and generate high uUYS values; the weaker tensile forces between particles in less cohesive powders give rise to lower values. 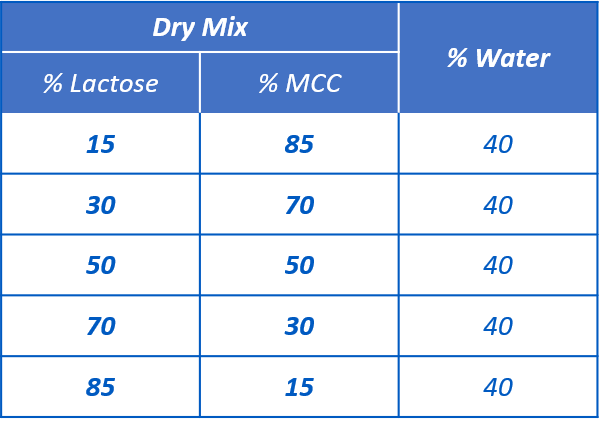 Uniaxial testing shares the simplicity of concept of traditional low-cost techniques for powder flow measurement, such as angle of repose and flow through an orifice and has long been recognized as an intuitively appealing method for flow characterization. However, there have been challenges to meet in the practical realization of a commercial uniaxial tester. These include the need to ensure:

* uniform density through the consolidated powder column
* an optimized height/diameter ratio for the consistent and reliable fracture of all powders
* an easily removed sleeve that maintains the integrity of the consolidated column.

These challenges have now been resolved, giving powder processors access to a tester that combines an intuitive method and short test times with the automation, high repeatability and reproducibility that many traditional techniques lack.

Furthermore, the parameter that uniaxial testing measures, uUYS, is an intrinsic material property rather than a metric associated with performance in a test, and one well-known in powder testing. Efforts to bring a more scientific approach to powder testing and the design of powder processing equipment first began with shear cell analysis and its application in hopper design. Shear cell analysis involves measuring the forces required to shear one consolidated powder plane relative to another and generates UYS data, alongside other parameters, via a process of mathematical extrapolation. This extrapolation process can amplify the impact of small measurement errors on UYS values, and shear cell testers vary considerably in terms of the repeatability they offer with advanced systems deploying strategies to minimize errors and enhance data quality. Today shear cell analysis is used well beyond its original intent and routinely applied to rank powder flowability. Though uUYS and UYS are not numerically identical, because of the different conditions applied during testing, uniaxial testing ranks flowability in exactly the same way but by direct measurement with a shorter, easier, test, using lower cost equipment. 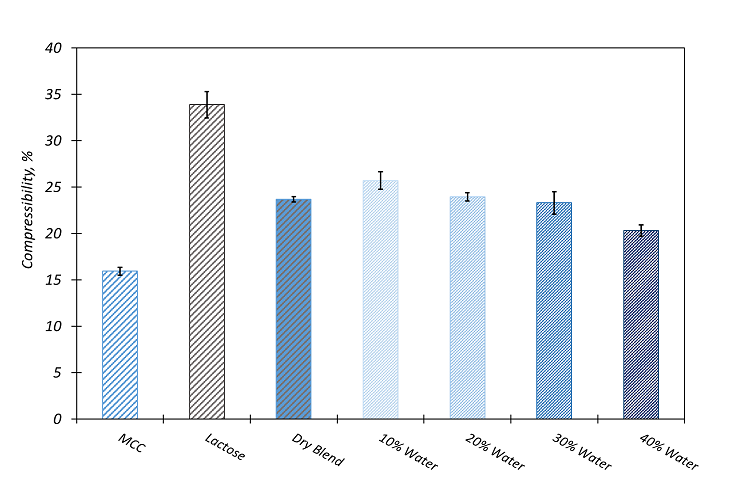 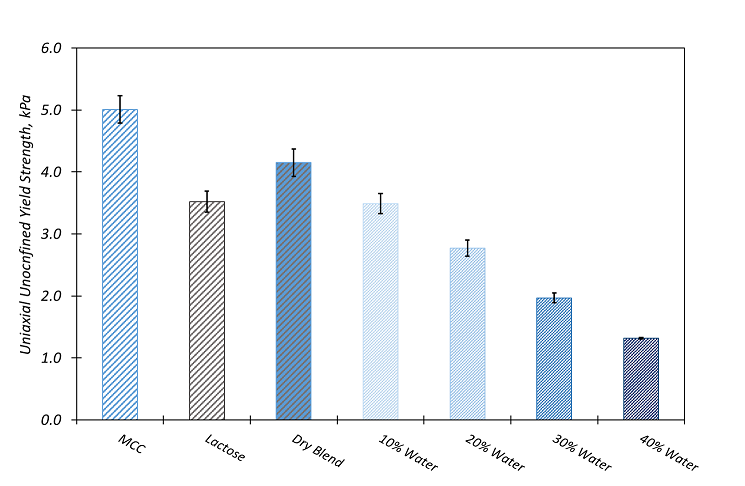 An experimental study was carried out to assess the impact of water content (Phase I) and excipient ratio (Phase II) on the properties of granules produced in a batch HSWG process. Granules were prepared from a dry mix of lactose (Granular 140) and micro crystalline cellulose (MCC – Avicel PH101) using water as the binder. In Phase I of the trial a 50:50 (by wt) mixture of the two excipients was used and granulations were carried out with a 10, 20, 30, and 40% (by wt) water content. In Phase II of the trial the water content was kept constant at 40% and excipient ratio was varied. Table 1 provides full details of the granulation formulations.

Each granulation was carried out using an in-house, lab-scale batch HSWG unit. Water was added over a period of 90 seconds and granulation was then continued for a further 180 seconds. The resulting wet mixtures were screened through an 850µm sieve and then dried at 60ºC for seven hours. A final screening of the dried granules, through a 2-mm sieve, produced a sample for testing. Each batch of granules was subject to uUYS measurement (Freeman Technology’s uniaxial powder tester,) under identical test conditions: [email protected] 8kPa for five seconds followed by the application of an MPS of 40kPa for 30 seconds. Three repeats were carried out for each measurement. Compressibility, and consolidated and poured bulk density (CBD and PBD) were also measured, using the same instrument, to provide more detailed granule characterization. 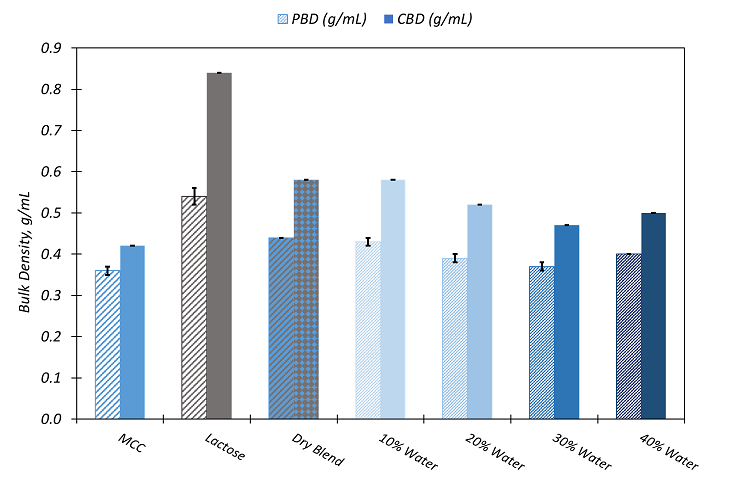 Figure 3 shows uUYS data for the dry excipients and for the granules produced in Phase I. The flowability of the 50:50 dry blend lies mid-way between that of the two excipients and for the granules there is a clear trend with water content: increasing water content improves flowability. A visual examination of the product from each granulation suggests that granules only truly begin to form at a 30% water content, dominating the product formed at 40% water. The observed improvement in flowability at lower water contents is therefore likely to be due to an initial reduction in fines or changes to the surface of the excipient particles caused by the adherence of water. 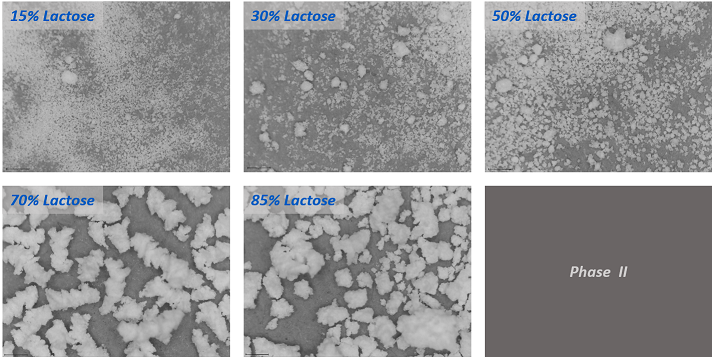 Compressibility and density data for the dry excipients show similar results to the uUYS data with values for the 50/50 mixture lying approximately midway between that of the pure Lactose and MCC. The compressibility of the granules decreases with increasing water content, though the trend is less pronounced than for uUYS. More cohesive powders tend to entrain air and, as a result, can exhibit greater compressibility. These results are therefore consistent with packing efficiency progressively increasing as inter-particular forces decrease. However, density data bring complexity to this analysis. Though PBD only changes minimally with water content, both PBD and CBD reduce with increasing water content up to 30%. More efficient packing does not lead to an increase in bulk density until water content increases from 30 to 40% water. This is consistent with the prevalence of efficiently packed, densified granules, at that point. At lower water contents density appears to be influenced by factors in addition to packing efficiency, highlighting the critical point that density alone is not a reliable indicator of flowability. 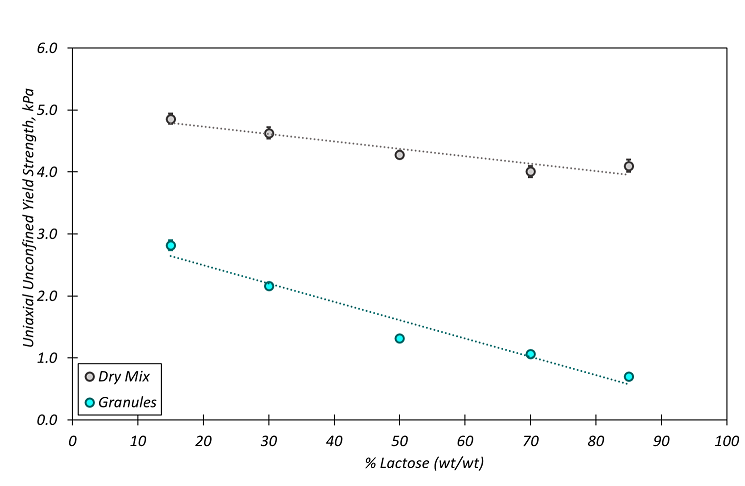 Images of samples from each of the Phase II granulations show that excipient ratio significantly influences granule shape and the level of fines. The 70 and 85% lactose blends produce larger more elongated granules and significantly less fines than those with lower lactose levels, forming a continuous paste rather than a wet mass that causes blockages during the wet screening step. The yields associated with these high lactose blends are therefore relatively low. When unscreened material from both batches was dried the 70% lactose blend produced discrete granules whereas an 85% lactose level resulted in large clumps of material. 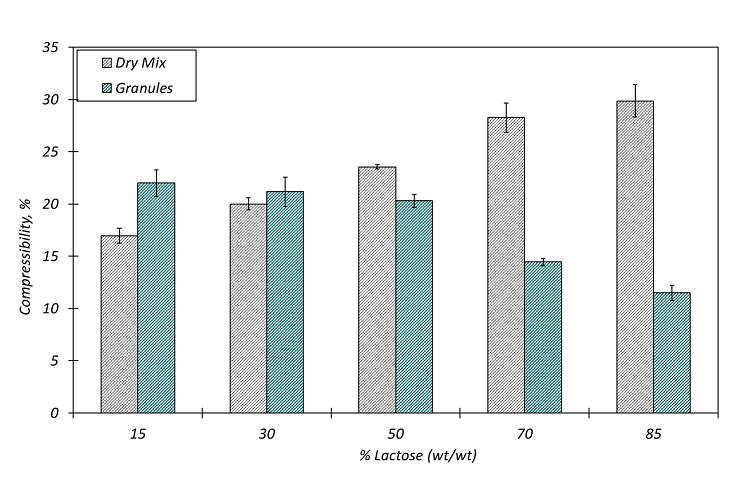 An examination of the results for the dry mixtures produced in Phase II shows a clear correlation between excipient ratio and flowability with higher lactose resulting in lower uUYS values, indicating less cohesivity. Bulk density (both poured and consolidated) and compressibility both increase with lactose content. As previously discussed, higher compressibility is typically associated with more cohesive powders so these data further illustrate the limitations of relying on bulk properties such as compressibility as indicators of flowability.

Data for the granules show that higher lactose contents are associated with lower uUYS and lower compressibility; PBD and CBD values exhibit minimal variation. As with the Phase I data the density results do not reflect a simple progression towards better packing efficiency.  In this case, the trends may be linked to morphology which can impact both packing behavior and mechanical interlocking, a primary mechanism effecting flowability. Such effects are extremely difficult to predict from fundamental properties such as particle size/shape and density alone, further highlighting the value of flowability measurements. 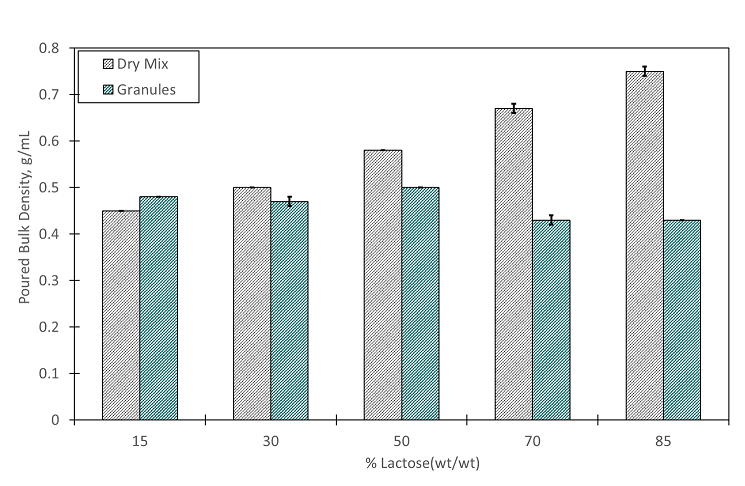 Comparing the two sets of data shows that granulation consistently induces a marked improvement in flowability as evidenced from the relative uUYS values. Interestingly though the relationship is not linear. Granulation of the 15% lactose blend results in a 40% reduction in uUYS, while that of the 85% lactose blend drops by 85%. This highlights the difficulties of predicting the improvement in flowability that will result from granulation, even for closely similar formulations. It is also notable that at lower lactose contents the granules exhibit better flowability than the dry mix despite being more compressible, reinforcing the earlier point about the unreliability of compressibility data as an indicator of flow properties. 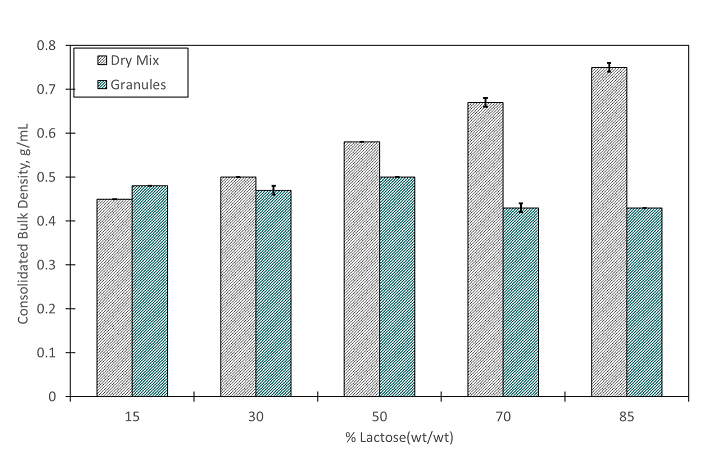 Finally, although it is granulation of the high lactose blends that results in the greatest improvement in flow, and granules with the lowest uUYS values of any of the tested formulations, the challenges encountered with wet screening suggests that the production of these granules will be associated with low yields and extended process times. Any improvements in flow may therefore be offset by increased production times and costs, depending on the intended application.

Conclusion
Uniaxial powder testing offers the simplicity and intuitive interpretation of traditional techniques such as angle of repose, but measures an intrinsic powder property, uUYS, to rank flowability, with high repeatability and reproducibility. Measurement is direct and much quicker than shear cell analysis. The data presented demonstrate the utility of uniaxial testing to differentiate the properties of granules and provide information for process optimization, highlighting its capabilities as a cost-efficient tool for improving powder processes.