How to Interpret a Solids Flow Report 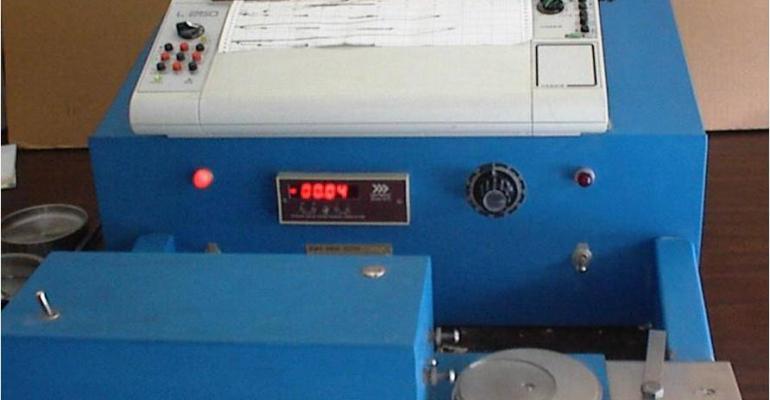 In order to determine if a new bin or silo will work reliably, or to be able to make modifications to an existing troublesome bin or silo, you need to know:

Funnel Flow
Funnel flow occurs because the hopper is not sufficiently steep and smooth enough to ensure sliding along its walls. In funnel flow, material flows toward the outlet through a channel that forms within stagnant material caused by friction on the shallow and/or rough walls. With a cohesive solid, this channel expands upward from approximately the hopper outlet, potentially to silo cylinder walls. Even if the outlet is fully live, the preferential flow channel may empty and form a stable rathole. This may:

Generally, a funnel flow pattern is only suitable for coarse, free-flowing, non-degrading solids when segregation is unimportant.

Mass Flow
In mass flow, the hopper is steep and smooth enough to ensure flow of all the material whenever any solid is withdrawn, thereby overcoming the friction that develops between the material and the hopper wall surface.
Where there are many disadvantages to funnel flow, mass flow has several advantages, as follows:

· flow is uniform
· pressures acting at the outlet are practically independent of the head of solid in the bin
· segregation of particles is minimized by the first-in- first-out flow sequence associated with mass flow and segregated particles are re-mixed as they discharge from the outlet
· fine powders tend to deaerate and flooding is avoided, due to increased residence time

Generally, a mass flow pattern is recommended when handling cohesive materials, powders that can flood, materials which degrade with time, and when segregation needs to be minimized.

Material Flow Properties
There are two major considerations for reliable flow: cohesive strength and wall friction properties. Cohesive strength is measured using a bench scale laboratory testing device such as a direct shear tester (Jenike Shear Tester; see photo 1). This device is used to determine a material’s “flow function”, whereby the material’s cohesive strength is measured as a function of applied consolidation pressure (pressure/strength relationship). The sample’s moisture content and particle size are controlled, while the direct shear tester is capable of determining the effects of temperature and time of storage at rest. This information is then used to determine the opening size required to prevent arching and ratholing in a bin or hopper.
The Jenike Shear Tester is also used to measure wall friction properties. Consider that friction develops between a solid and the walls of a bin or hopper. Wall friction determines whether the solid will slide on the wall (mass flow) or adhere to the wall forcing it to flow preferentially on itself (funnel flow) rather than at the walls.
Additionally, the material’s compressibility (bulk density/pressure relationship) is determined. Typically, a flow report is created describing the material’s flow properties. This report indicates values to be used to design a new bin or to modify and existing one. A flow report usually consists of the following:

Title Page
The first page is obviously a title page with a description of the project, company, etc.

Introduction and General Comments
This contains a general comments section and is meant to provide general information regarding the flowability of the particular material being tested. These comments are given without any bin geometry in mind and serve to help explain tabulated data in the following pages and how to interpret it.

Section 1 Arching and Ratholing Dimensions of the Flow Report indicates the arching and ratholing dimensions of your material as a function of time at rest, temperature, etc, as follows:

Arching Dimensions
Time at Rest, hours -- In our example, the material was tested to simulate 0 hours storage (continuous flow) or as if the material was put in a bin and flow initiated immediately. As well, some period of storage at rest was simulated, such as overnight, 72 hours, etc.

Temp., ºF -- The material was tested at 90ºF for zero hours and at 90ºF cooling to room temperature after three days at rest to simulate actual storage conditions.

Arching Dimensions
P-Factor -- P-Factor is an estimation of the effect of excess pressure on your material. The magnitude of the excess pressure or overpressure factor can be estimated for vibration and impact during charging into the bin as follows (see photo 2):

Impact on filling
If you are filling your bin with a fine material and it drops close to the outlet, the P-Factor should be calculated as follows: (see photo 3)

Mass Flow Bc, ft -- “B” is the hopper opening and “c” stands for conical, such that these dimensions are given for zero hours and for some period of storage at rest. These are the minimum arching dimensions for a conical hopper that is designed for mass flow.

Mass Flow Bp, ft -- “B” again is the hopper opening, while “p” stands for planar or wedge type hoppers, such that these dimensions are given for zero hours and for some period of storage at rest. These are the minimum arching dimensions for the width of a slotted opening in a wedge hopper, designed for mass flow. Remember that the slot length should be at least three times the width.

σ1, psf -- This is the major consolidation pressure acting on the material as it remains in a bin. This pressure is simulated in the laboratory tests.

EH, ft -- Effective Head (EH) is determined as a result of material sliding on the cylinder walls. As it slides, the material loses some of its head pressure due to shear along the walls and is referred to as EH rather than the actual head of material. The effective head typically ranges from 5 to 40 ft.

R = hydraulic radius of the cylindrical portion of the bin, i.e. ratio of cross sectional area to circumference
R = D/4 for a circular cylinder of diameter D or a square cylinder of side D
R = W/2 for a long rectangular cylinder of width W.
U = tan (Φ’), coefficient of friction between the stored solid and the cylinder walls
k = ratio of horizontal to vertical solids pressure. A value of 0.4 is usually acceptable within cylinders.
H = height of the cylindrical portion of a bin. 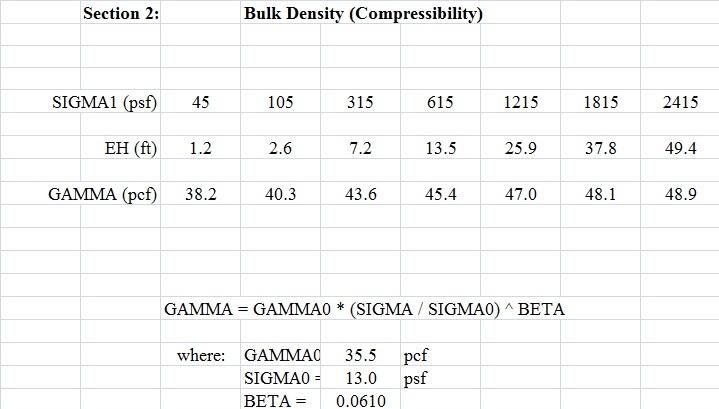 Section 2 Bulk Density/Pressure Relationship indicates the bulk density of your material as a function of consolidation pressure or head of material as follows (see photo 5):

σ 1, psf -- Same as above
EH, ft -- Same as above
γ, pcf -- γ is the Greek symbol used for bulk density. There are a range of bulk densities when dealing with solids, not just loose density and packed density. In this case, γ ranges from 38.2 pcf to 48.9 pcf. γ is used in opening size and hopper angle calculations along with bin and feeder load calculations.

Outlet Dia., Cone, ft - Is usually interpreted as the conical opening size; however, it could be any span in the hopper, not just the opening.

Outlet Width, Slot, ft - Is usually interpreted as the slot opening size; however, it could be any span in the hopper, not just the opening.

’ - This is the wall friction angle generated by the wall surface and  your material during flow on a particular wall surface. It is given in degrees from horizontal.

θc - This is the hopper angle (degrees from vertical) required for mass flow in a conical hopper.

θp - This is the hopper (degrees from vertical) required for mass flow along the sidewall of a wedge type hopper.

As an example of using these dimensions, you could design a mass flow conical hopper with a 2.1-ft-diam opening (to prevent arching) or a slot that is 1 ft wide, that would require the following hopper slopes (depending on the wall surface preferred):

A Note about Feeders and Gates
If flow from the bin is controlled by means of a feeder, it must be so designed as to draw uniformly from the entire cross section of the outlet.
Uniform withdrawal is especially important when feeding fine powders from slotted outlets. Typical commercial designs tend to draw material either from the front or the back of the slot resulting in a preferential flow channel which will convert a bin intended to mass flow, to a funnel flow bin with the potential to form a stable rathole. The powder may also fluidize within this channel and flood upon discharging from the bin.
Initial fill pressures occur when a bin is filled after being emptied.  This can cause significantly higher solids pressures to act on your feeders and you will require approximately 2.5 times more power at startup. Once started, initial fill pressures will convert to flow pressures which are typically lower.
Gates should be used with caution. A gate should be operated fully opened or fully closed and not used to meter or control the rate of withdrawal from a hopper. Partially opened gates create preferential flow channels that cause funnel flow and may jeopardize the structural integrity of your silo.

Joseph Marinelli is a consulting engineer and president of Solids Handling Technologies. He has been providing testing and consulting services since 1972. As a former consultant with Jenike & Johanson Inc., he has years of experience testing powders and designing bins and feeders for reliable flow. He lectures frequently on the topic of powder handling, and has published several papers, including an article in a chemical encyclopedia and two in a food powder book.