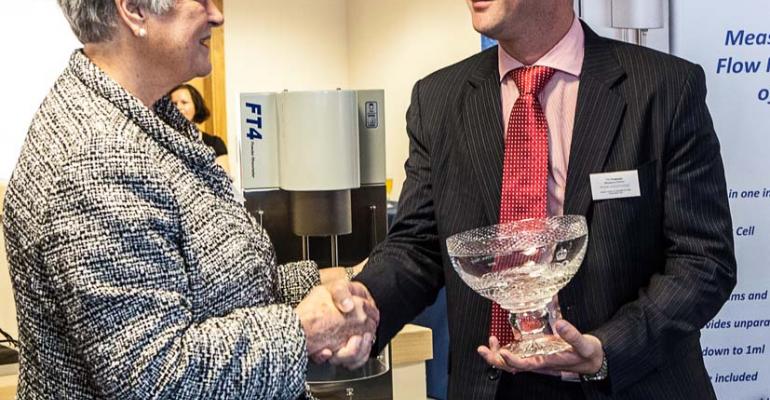 On July 13, 2012, Dame Janet Trotter, the Lord Lieutenant of Gloucestershire (UK), presented Tim Freeman, managing director of Freeman Technology, with the 2012 Queen’s Award for Enterprise in the category International Trade.

Guests, who included Freeman Technology’s founders Reg and Jan Freeman, attended the lunchtime celebration at the company’s global headquarters in Tewkesbury, Gloucestershire, UK. As well as witnessing the official presentation, everyone had the opportunity to tour the facility, which houses all of the company’s manufacturing, R&D and commercial operations, and which has been home to the Freeman Technology team for just under a year.

The Lord Lieutenant, who toured the Freeman Technology headquarters ahead of the presentation, was accompanied by deputy lieutenants Andy Hodson and professor Colin Dennis, as well as Gloucestershire County Council chief executive Peter Bungard, who read out Queen’s Award citation. Dame Janet Trotter said that one of the delights of her job is that she learns something new every day. She went on to explain how the Queen’s Awards for Enterprise were established in 1965 and are designed to acknowledge British businesses that excel.

Receiving the crystal bowl and the scroll that signify the achievement of a Queen’s Award, Tim Freeman made a point of thanking everyone who has contributed to the company’s success. “I am especially proud of the Freeman Technology teams around the world and thank them all for their hard work and continuing commitment to the company,” he said. “I do also want to say thank you, too, to all our suppliers whose skills and expertise we rely on in producing high quality scientific instrumentation, and to the many individuals and organizations who have supported the growth of the company over the years.”

Tim Freeman also reminded everyone that without the vision, drive, and determination of Reg and Jan Freeman, who founded the company and took it in the direction of powder characterization in the late 1990s, Freeman Technology would not be enjoying the worldwide success that it does today.

Freeman Technology’s FT4 powder rheometer is widely used to characterize the flow properties of powders. The information it delivers is used to underpin process and product understanding and supports the optimization of powder processes across many different industries.

Since the beginning of 2011, Freeman Technology has significantly expanded its global presence and grown sales worldwide with the establishment of a new direct operation in North America and an extension of distribution partnerships to include China, India, Malaysia, Singapore, Taiwan, and Thailand. In addition, last year’s move to the present larger premises in the UK has extended the company’s scope for manufacturing and support.

The 2012 Queen’s Award for Enterprise is the company’s second, having been awarded in 2007 in the category of Innovation. For more information, visit www.freemantech.co.uk.