Image courtesy of U.S. Chemical Safety and Hazard Investigation Board 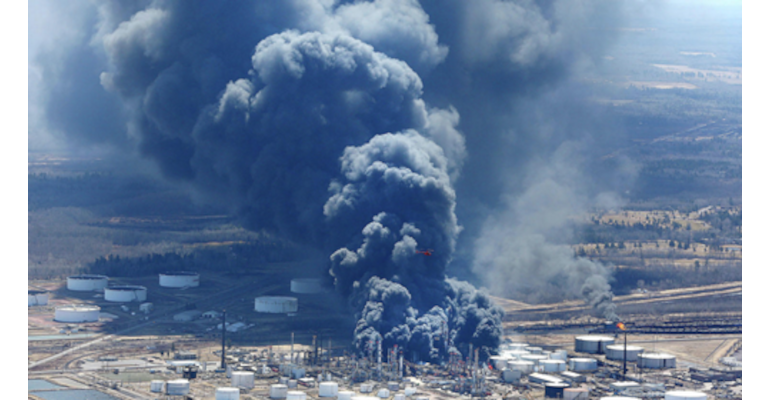 The U.S. Chemical Safety and Hazard Investigation Board (CSB) released its final report on the 2018 refinery explosion and fire at the Husky Superior Refinery in Superior, WI.

The accident injured 36 workers, caused roughly $550 million in damage to the facility, and released 39,000 pounds of flammable hydrocarbon vapor into the air. More than 2,500 residents of Superior, WI were evacuated from their homes, and the City of Duluth, MN issued a shelter in place order.

At the time of the incident, the Superior Refinery was owned by Husky Energy, which had purchased the refinery less than six months earlier in November 2017 from Calumet Specialty Products LP. In 2021, Husky Energy merged with Cenovus Energy.

The CSB’s final report details how the incident occurred while the refinery was shutting down its fluid catalytic cracking (FCC) unit to perform planned maintenance (called a “turnaround”), a common refining process. Two vessels in the FCC unit exploded, propelling metal fragments up to 1,200 ftaway that punctured a nearby asphalt storage tank at the refinery, which ultimately spilled approximately 17,000 barrels of hot asphalt that ignited and caused multiple fires.

The CSB’s final report notes that in addition to smoke from the fires at the refinery, Superior evacuation was based on the potential risk of a release of highly toxic hydrofluoric acid (HF), which was stored and used at the refinery. Although no HF release occurred, the risk of an HF release was present because the HF storage tank was closer to the point of the explosion than the asphalt storage tank and could have been punctured by the debris from the explosion.

“Refineries with FCC units, including especially those with hydrofluoric acid alkylation units, should review our report thoroughly and ensure that they have the necessary safeguards in place to  prevent a similar disaster from occurring at their facilities during shutdowns and startups.  This accident could have been avoided,” said CSB chairperson Steve Owens.

The CSB’s report identifies six key safety issues, which include:

Transient Operation Safeguards: “Transient operation” is when a process is not operating in its normal state, such as shutting down for a maintenance outage. The CSB emphasizes the importance of separating air from flammable hydrocarbons during an FCC shutdown to prevent an explosive mixture.  The report notes the uniqueness of the FCC technology, as it processes both air and flammable hydrocarbons inside interconnected process equipment which increases the likelihood of an explosion. At Husky Superior Refinery, essential safeguards at the FCC unit were either not implemented or not effective at the time of the incident.
Process Knowledge: Throughout the Superior Refinery’s history under several owners, its FCC expertise was mostly in-house. The use of external experts was limited, and the refinery had minimal technical engagement with other refineries. As a result, at the time of the incident, Husky Superior Refinery employees did not adequately understand or know how to effectively control the FCC unit’s transient operation hazards.

Industry Knowledge and Guidance: The Husky incident occurred less than one year after the CSB released a similar investigation of another FCC unit in California – industry trade groups distributed the lesson from the California incident as well as the CSB’s video. Despite these educational efforts, Husky Superior Refinery employees were not aware of or did not learn lessons from the 2015 California incident in a way that could have helped them to prevent the April 2018 incident. Currently, there is no industry publication that establishes common basic process safety expectations for all FCC units. FCC technology is developed and licensed by more than six companies, each with its own designs and configurations. Furthermore, portions of many older FCC units in the United States have been revamped by multiple technology licensors.

Brittle Fracture During Extreme Events: The primary absorber and sponge absorber vessels in the Superior Refinery’s FCC unit had failed by brittle fracture or shattering like breaking glass, which sent more than a hundred pieces of metal debris throughout the refinery – some striking an asphalt tank. It was determined that these existing vessels were not constructed of newer grades of steel now recommended for new vessels because of their better toughness properties. With the newer grades of steel, should the equipment fail, it should tear open and be less likely to result in metal debris fragments impacting the surrounding area.
Emergency Preparedness: Husky Superior Refinery did not prevent the asphalt from catching on fire due to the size of the asphalt release and competing priorities of the FCC unit explosion, such as attending to worker injuries and extinguishing existing fires at the FCC unit.

“These safety issues seek to address incident causes," said CSB board member Sylvia Johnson. "We call on refineries, trade groups, and regulators to examine our final report and apply the key lessons to help ensure safe operations at facilities throughout the country and to develop and adopt effective emergency response practices.”

The CSB’s final report issues 16 safety recommendations to several entities including the company, the U.S. Occupational Safety and Health Administration (OSHA), the U.S. Environmental Protection Agency (EPA) and the American Petroleum Institute (API). In particular, the CSB has outlined actions that the company should take to improve the refinery’s operations and  is calling on the EPA to develop a program that prioritizes inspections of FCC units in refineries that operate HF alkylation units. Part of this program will verify FCC safeguards that prevent explosions during transient operations.