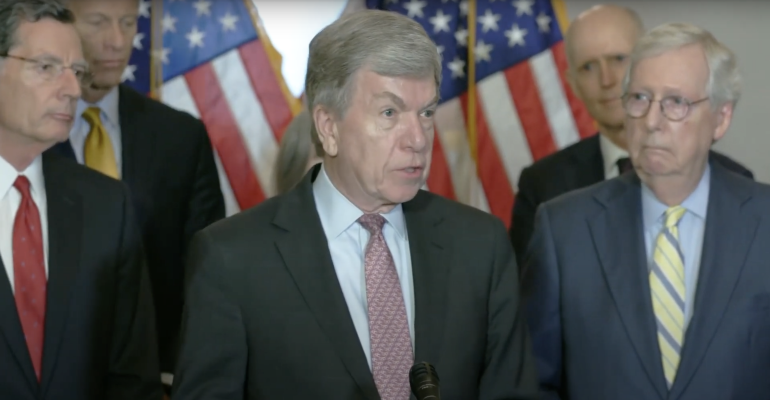 A screen grab from a video of US Sen. Roy Blunt's comments during a press conference this week.
US Senator Roy Blunt says the conflict is creating a “disaster in the making” as wheat, corn, and sunflower oil exports are stalled in Ukraine and Russia.

Speaking at a Republican leadership press conference Tuesday, US Sen. Roy Blunt (R-MO) called Russia’s invasion of Ukraine “a true food disaster in the making” as exports of wheat, sunflower oil, and corn have stalled in both nations, potentially creating food supply issues around the world.

The Missouri senator detailed that operations at Ukrainian ports have been at a standstill since the invasion started and suggested that the war could have long term effects.

“This has a huge impact on the whole world, but particularly on Africa,” said Sen. Blunt. “What’s in the silos in Ukraine right now is not getting out. And Ukrainian farmers aren’t getting crops planted for this year.”

Food prices are likely to climb for consumers in the US and elsewhere because of the invasion, the politician noted.

“But the real issue here, at this moment, may not be nearly as much price as is real hunger, some occurring today,” Sen. Blunt said. “A lot more could occur just a few months from today if we don't start thinking about how we deal with this part of that crisis.”