Image courtesy of The University of Manchester 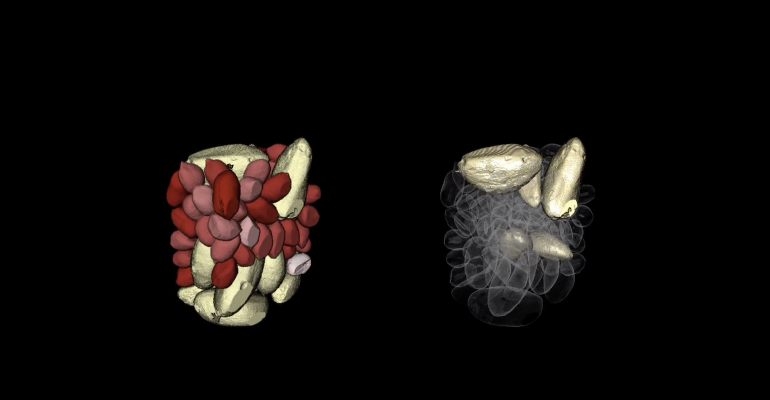 Researchers at The University of Manchester in the UK recently published research in the journal Scientific Reports that examines how particle shape can cause issues in granular materials during the de-mixing process. Scientists specifically sought to figure out why Brazil nuts tend to rise to the top of mixed nuts to unlock the science behind this particle science phenomenon.

The team used 3D imaging to observe at how Brazil nuts move upwards in a pile of peanuts. The authors of the journal article said developing a better understanding the “Brazil nut effect” in materials could benefit a number of industries, including pharmaceuticals and mining, according to a release issued by the university.

“Our study highlights the important role of particle shape and orientation in segregation. Further, this ability to track the motion in 3D will pave the way for new experimental studies of segregating mixtures and will open the door to even more realistic simulations and powerful predictive models,” said said Dr. Parmesh Gajjar, the study’s lead author, in a statement. “This will allow us to better design industrial equipment to minimize size segregation thus leading to more uniform mixtures. This is critical to many industries, for instance ensuring an even distribution of active ingredients in medicinal tablets, but also in food processing, mining, and construction.”

The “Brazil nut effect” is a result of uneven mixing and can be seen in mixed nuts, cereal, and a range of other products. Engineers have traditionally had few methods to determine how particles behave on the inside of a pile. This new research, conducted at the new National Research Facility for Lab-based X-ray Computed Tomography (NXCT) at The Henry Royce Institute, could be a breakthrough in our understanding of particle movement.

“In this work, we followed the motion of the Brazil nuts and peanuts through time-lapse X-ray Computed Tomography as the pack was repeatedly agitated,” Regius Professor Philip Withers said in a statement. “This allowed us to see for the first time the process by which the Brazil nuts move past the peanuts to rise to the top.”

“Critically, the orientation of the Brazil nut is key to its upward movement. We have found that the Brazil nuts initially start horizontally but to not start to rise until they have first rotated sufficiently towards the vertical axis. Upon reaching the surface, they then return to a flat orientation,” Dr. Gajjar said.