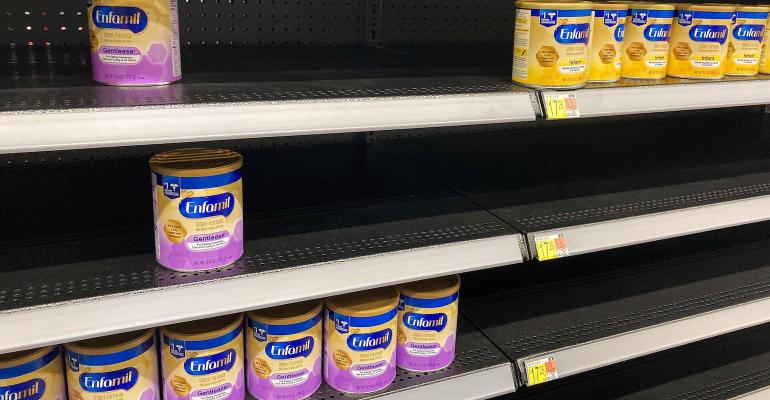 A baby formula display shelf is seen at a Walmart grocery store in Orlando, FL on May 8, 2022. Representative image.
Political figures on both sides of the aisle are condemning the federal government’s response to the formula supply chain crisis.

As Americans experience an acute shortage of baby formula driven by recent recalls of contaminated Abbott Laboratories products and the shutdown of its formula plant in Sturgis, MI, members of Congress and the House of Representatives on both sides of the aisle are asking for answers and calling out federal food safety regulators for responding slowly to a whistleblower complaint alleging wrongdoing at the Michigan facility.

A 34-page whistleblower report authored by a former employee at Abbott’s Sturgis plant was sent to the US Food and Drug Administration (FDA) in October 2021, claiming that the company falsified records, hid information from investigators during a 2019 audit of the plant by the FDA, maintained lax clean-in-place (CIP) procedures, failed to take corrective measures, and released untested infant formula. Other allegations included lacking traceability of the product and an atmosphere of retaliation.

House Appropriations Committee Chair Rose DeLaura (D-CT) released details of the document in late April, expressing concern in a statement that the “FDA reacted too far too slowly” on the allegations.

“The report was submitted to FDA on Oct. 20, 2021. The FDA did not interview the whistleblower until late December 2021. According to news reports, FDA did not inspect the plant in person until Jan. 31, 2022, and the recall was not issued until Feb. 17, 2022,” Rep. DeLaura said in a release. “Why did the FDA not spring into action? Why did it take four months to pull this formula off of store shelves? How many infants were fed contaminated formula during this time, by parents who trusted that the formula they were buying was safe? How many additional deaths and illnesses were there due to FDA’s slow response?”

Following the release of the whistleblower’s report, a range of officials issued statements or tweeted reactions to the news.

“In light of everything we know, it’s outrageous that the FDA failed to quickly take action to protect babies from contaminated formula,” Sen. Patty Murphy (D-WA) said in a release. “I’ve been demanding answers from Abbott and calling on the FDA to address its longstanding food safety failures – because families across the country deserve to know they can feed their children without fear that their formula or food might seriously sicken them.”

Americans need a plan IMMEDIATELY to solve the shortage of baby formula in our country. The silence from the Biden administration and FDA is unacceptable as parents across the country are worried about feeding their children.

A May 10 statement released by Sen. Mitt Romney (R-UT) called out the FDA and US Department of Agriculture (USDA) for a “lack of action to mitigate the ongoing shortage” and opined that the agencies do not have a clear plan to address the issue moving forward.

“Given the serious implications of the current shortage on infant health, I am deeply concerned about the apparent lack of an effective mitigation strategy and urge both agencies to move as fast as possible to resolve this situation,” Sen. Romney stated.

No mother or baby should have to suffer through this. Biden’s FDA waited months to inspect the plant that makes baby formula. Now it’s hurting Texas. https://t.co/e9mclorhYu

Senate minority leader Mitch McConnell (R-KY) placed most of blame for the shortages and the FDA’s delayed actions on the Biden Administration.

Moving to address ongoing conversations about approaches to alleviate the baby formula shortage, the White House published a fact sheet on Saturday outlining the administration’s plans to support the formula supply chain. President Biden is calling for the removal of “red tape” and simplifying products to get the goods to retailers faster, federal and state crackdowns on price gouging and unfair market practices and increasing imports of baby formula.