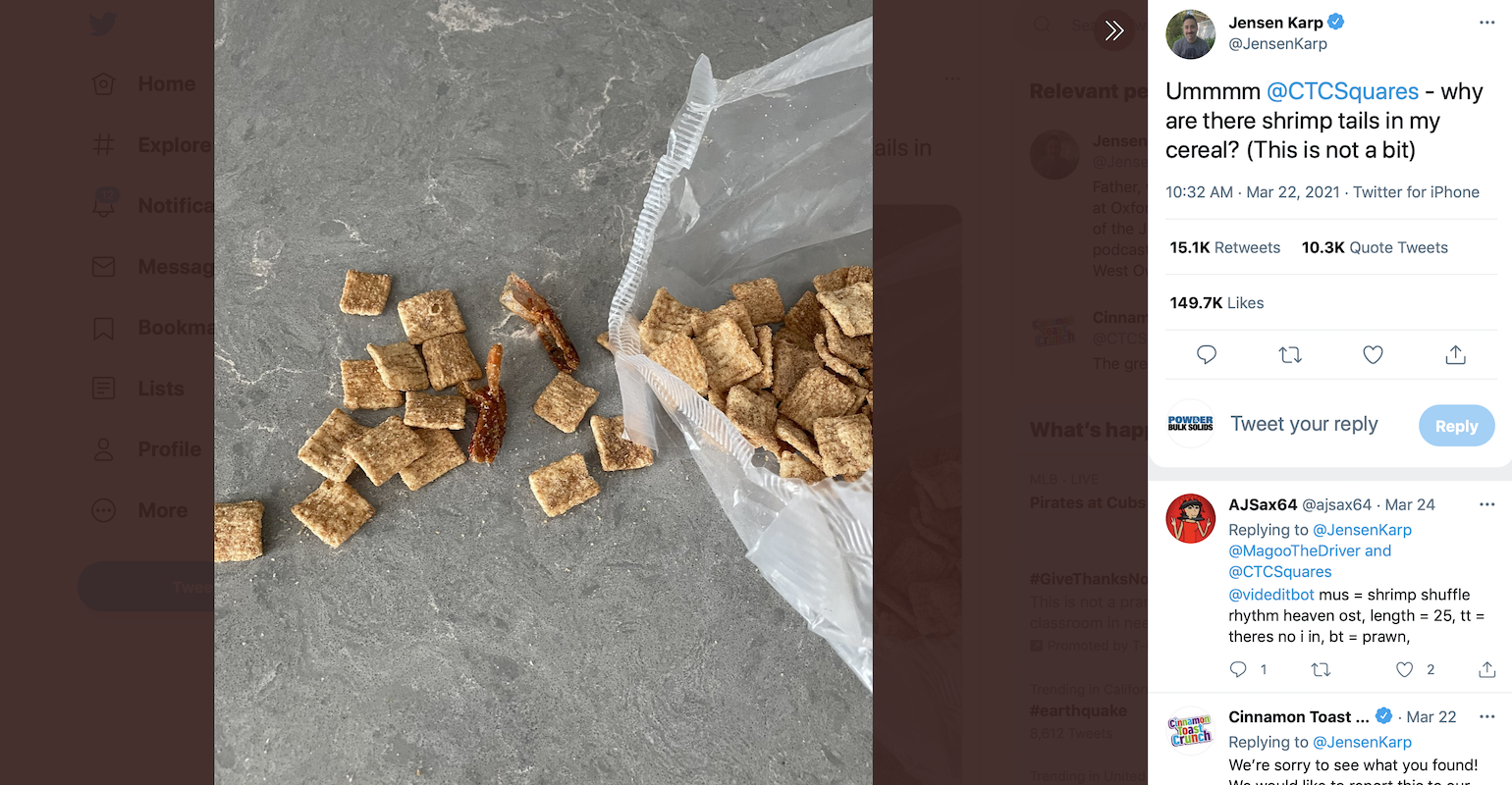 A screenshot of @JensenKarp's tweet that allegedly shows shrimp tails found in a box of Cinnamon Toast Crunch cereal.
General Mills said the “shrimp tails” in the image may just be agglomerated cinnamon sugar inadvertently added to the product

The internet was abuzz this month after Los Angeles-based comedian Jensen Karp tweeted out a photo of what he said were sugar coated “shrimp tails” found in his box of Cinnamon Toast Crunch cereal.

In the days following Karp’s tweet, controversy brewed as social media users posted their own photos and experiences with contaminated food products and many were quick to condemn the product safety practices of food companies in general.

This incident shows how one small production error can have massive ramifications, particularly in today’s environment of instantaneous communications and social media. Major media outlets like The New York Times, Fox News, CNN, and Forbes amplified the story even further in the days following the original post.

Here is the post that started this viral sensation:

Ummmm @CTCSquares - why are there shrimp tails in my cereal? (This is not a bit) pic.twitter.com/tTjiAdrnVp

Karp’s tweet quickly gained a large number of comments, likes and retweets. Commentary on the image ranged from hilarious to horrifying:

you can be honest, did you lick the cinnamon and sugar off?

Now feels like an appropriate time to revisit when a gecko fell out of my Cinnamon Toast Crunch box pic.twitter.com/CBtI3nY38y

We’re sorry to see what you found! We would like to report this to our quality team and replace the box. Can you please send us a DM to collect more details? Thanks!

Ok, I have sent you a DM. Fair warning, I look different since eating your cereal today. https://t.co/s9tUn2EOD3 pic.twitter.com/6otUwUmrYo

Later that day, the Cinnamon Toast Crunch account wrote back to Karp that the “shrimp tails” may have, in fact, been agglomerated cinnamon sugar.

After further investigation with our team that closely examined the image, it appears to be an accumulation of the cinnamon sugar that sometimes can occur when ingredients aren't thoroughly blended. We assure you that there's no possibility of cross contamination with shrimp.

That apparently did not settle the matter.

I am happy to report: a Carcinologist (crustacean researcher) that works at NHMLA is going to morphologically identify the shrimp using microscopy and he will work with a team of researchers to use DNA to try and identify the putative shrimp down to species. THIS IS HAPPENING.

Regardless if they really were “shrimp tails” or agglomerated cinnamon sugar, it is incredible to think that a single mishap like this could spark an internet phenomenon like this. A big lesson for the food industry to take home the need to maintain agility in responding to and investigating potential contaminations.