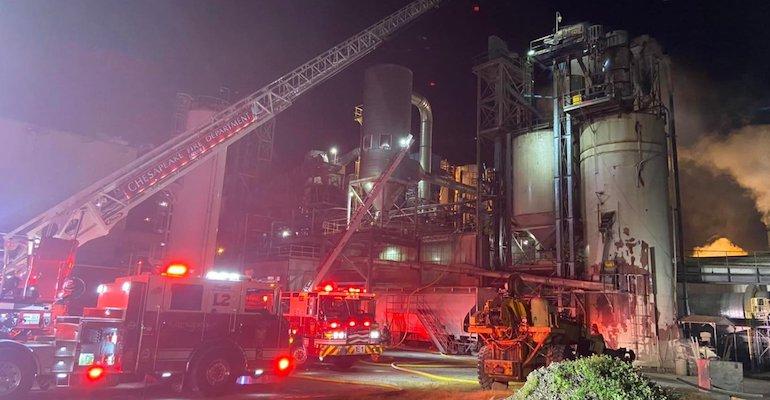 Chesapeake Fire Department firefighters responding to an industrial fire at a Perdue Farms facility near South Norfolk, VA this Saturday.
As rumors of a wave of intentional fires at US food plants brews on the internet, Powder & Bulk Solids asked fire safety experts for their take on the theory.

Claims of a suspicious “trend” of food processing plant fires in the US continue to spread on social media after the theory was debunked last week by Snopes and other fact checking organizations. Proponents of the conspiracy theory are repeating a message that more than 18 fires at US food facilities in recent months represents a strange string of events.

Here is what some of these armchair industrial safety experts are saying:

Annual fires at food processing plants averages 2-3. There’s been over 20 this year and we aren’t even halfway through Q2.

You're telling me a _food plant_ has as much danger of fire as a _power plant_? With 1/100th the pressures, 1/4 the temperatures and the only explosion risk being flour? I don't buy it. Not for a second.

To provide our audience and the public with some credible perspectives on this matter, Powder & Bulk Solids turned to the country’s foremost authorities on fire hazards, the National Fire Protection Association (NFPA) and the Federal Emergency Management Agency’s (FEMA) US Fire Administration (USFA).

“From what we have heard from media sources, there have been approximately 20 fires in US food processing facilities in the first 4 months of 2022, which is not extreme at all and does not signal anything out of the ordinary,” NFPA communications manager Susan McKelvey said to Powder & Bulk Solids. “The recent inquiries around these fires appears to be a case of people suddenly paying attention to them and being surprised about how often they occur. But NFPA does not see anything out of the ordinary in these numbers.”

While the organization does not maintain fire incident data for food processing plants specifically, analysis of the NFPA’s own data and information from the National Fire Incident Reporting System (NFIRS) found an annual average of 5,308 fires at all types of manufacturing and processing facilities between 2015 and 2019. The organization separately tallied an annual average of 961 fires at agriculture facilities, 1,115 incidents at grain or livestock storage sites, and 35 blazes at refrigerated storage locations over the same period.

“Overall, fires happen more often than people think. In 2020, there were 490,500 structure fires in the US The 5,308 fires occurring in all manufacturing and processing plants, as noted above, represents 1% of all US fires,” McKelvey said. “Fires that represent less than 2% of the overall fire problem are considered statistically insignificant. As a result, the number of fires for this occupancy classification falls within that category.”

When USFA was contacted for information regarding the recent fires at food processing facilities, external affairs specialist Thomas Olshanski pointed Powder & Bulk Solids to a passage in a Snopes article. Data collected by USFA shows that fire departments responded to an average of 108,500 nonresidential fires each year between 2017 and 2019. Cooking accounted for the leading cause – about 30% – of those incidents. Misuse of material or product contributed to ignition in 31% of nonresidential fires during the period.

From a Combustible Dust Perspective

Powder & Bulk Solids also reached out to Dr. Chris Cloney, managing director and lead researcher for Dust Safety Science, an organization that tracks combustible dust-related fires and explosions around the world, to ask if he has noticed an uptick in incidents in recent months.

"In terms of fire, flash-fire and explosion incidents at facilities handling or generating combustible powders or dusts, we have not seen an increase in incidents over the five-year averages in 2021 or the first quarter of 2022. In fact in the United States, the number of fires and explosions reported in the Combustible Dust Incident Database is at or below the running five-year average," Dr. Cloney told the publication via email. "There is generally not enough information available internationally to compare the average number of incidents year-over-year with any degree of statistical certainty. That being said, with the information we do have available the number of incidents appear to be trending at or below their running five-year averages in our database."

The researcher opined that the food plant fires "trend" rumor could be the result of untrained individuals performing data analysis using incorrect tools.

"In this case the data analyst is mistaking correlation for causation which is just one of many easy-to-make mistakes when analysing data. Another common mistake is confirmation bias, where the analyst (often unknowingly) picks data that supports their position going into the analysis and leaves behind data that opposes their position," he said to Powder & Bulk Solids. "That is possibly what happened in the current case, although it is also likely that not enough information was analysed or enough of the entire sample set covered to make a statistically meaningful statement on the number of incidents."

Some food industry organizations have also said that they are not seeing evidence of a shady spate of fires.

“We've not seen anything that that points to it being suspicious in any way,” American Association of Meat Processors (AAMP) communications manager Sam Gazdziak said in an interview with NBC News affiliate WCNC. “A lot of them seem to be mechanical failures, or just you know, very unfortunate, tragic things that happened. But nothing that was deliberate.”

A spokesperson for the North American Meat Institute (NAMI) said to the station that the organization is “not aware of any concerted effort to set food processing facilities on fire.”

What is the Takeaway?

A silver lining of this situation is that awareness of fire safety issues – particularly those involving food – is increasing among the public.

“Working with food means working with a fuel. Food fuels us but it can also fuel a fire. That’s why fire safety should always be top of mind when processing food, whether in your own kitchen or in a large-scale processing plant,” explains McKelvey. “Ensuring that fire protection systems are installed, tested, and maintained properly plays a critical role in protecting life and property. In short, it is always important to remain vigilant when it comes to fire prevention and safety.”

Editor's Note: This story was amended to include information from combustible dust fires and explosions expert Dr. Chris Cloney of Dust Safety Science. An earlier version of this article included a quote attributed to USFA external affairs specialist Thomas Olshanski. Powder & Bulk Solids later learned that the quote provided by USFA was a passage from a Snopes article.