How to Select the Right Feeder 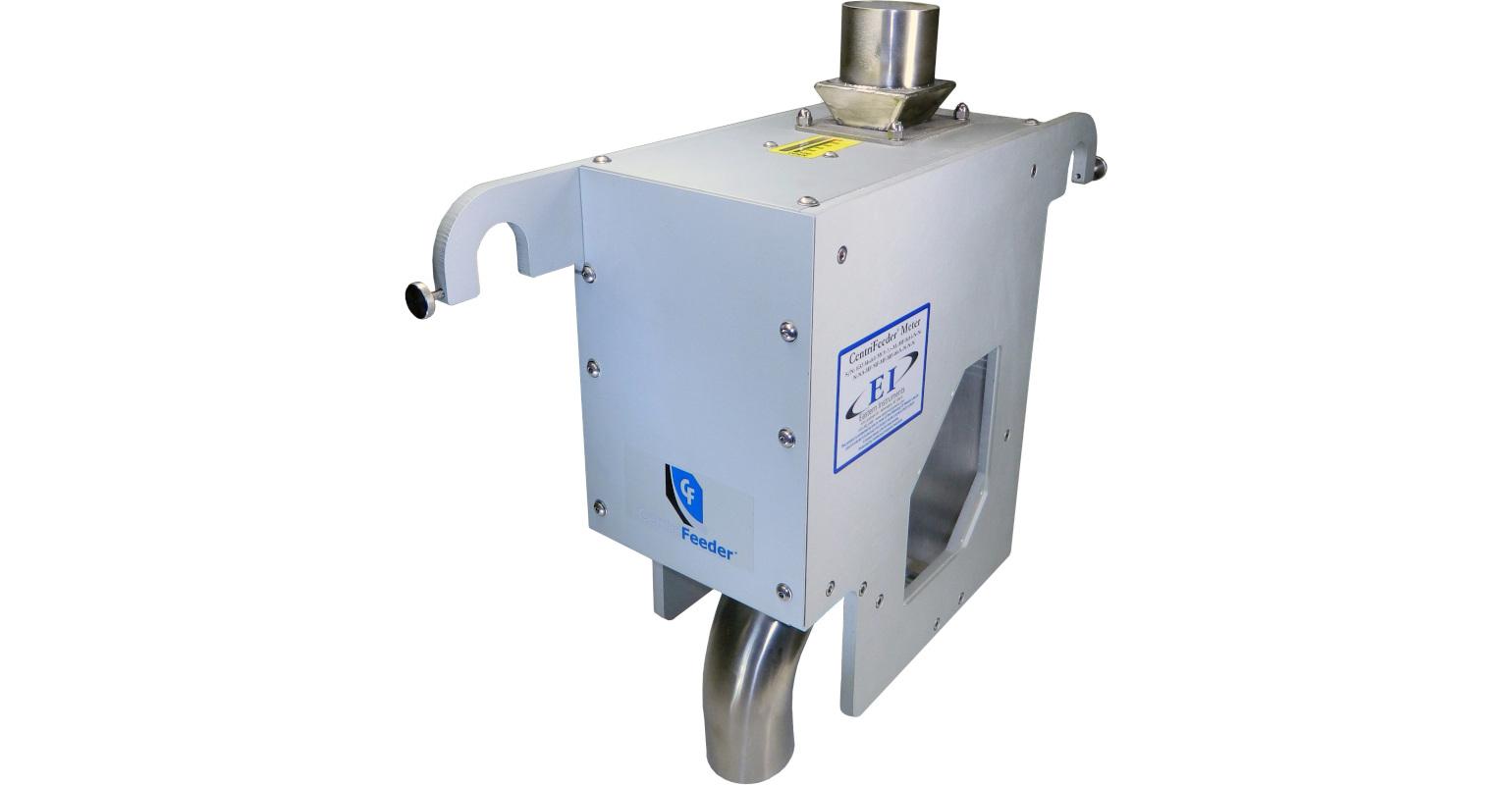 Selecting the right feed system for your operation can be a challenge. You may ask yourself, “With all the types of feeders out there, what type of feeder do I need?” The options can be overwhelming, so much so, that it can be easier to just go with a feeder type that you know. Maybe you have bought a particular type of feeder for applications in the past. When it is time to requisition for a new application, rather than wade through the endless options, maybe you just get the same thing that you did before. After all, it worked for the last application, right?

Well, if the answer is “maybe,” then maybe you could use some assistance going through your options. Afterall, not going through the options can leave you with the “same old thing” which may cost you more money and time in the long run.

The first thing to do is identify what your goals are and what it is that you expect from your feed system. Then you can weigh (pun intended) the pros and cons for each of the feeder types that you are considering, to be sure you select the right feeder for your operation.

What then, do you expect your feeder to do? Feeders are typically used for batching and blending. Batching typically consists of either filling containers or putting a set amount of an ingredient into a mixture or other process. This means being able to start and stop flow based on a predetermined set point or batch amount. Blending requires that you control based on flow rate rather than controlling based on a total. Therefore, continuous or blending applications attempt to maintain a flow rate based on a flow rate set point entered by the user, rather than a totalizing set point. The requirements for your feeder will be determined in part by how well your feeder accommodates batching and/or blending.

Though there are a variety of types of feeders that are used for batching and blending operations, the main types that we will be discussing are volumetric and gravimetric feeders, as they are the most abundant and most readily available feeder types. Volumetric feeders typically are a more simplistic way of feeding product. They include a variety of feeder types such as rotary valves, belts, screw conveyors, etc. They are usually set on a specific speed and a rate is inferred by the speed of the feeder. Volumetric feeders are relatively low maintenance and--though they are often adjusted for different products or feed rates--they typically do not require calibration as they are not truly measuring the product. They are relatively less expensive than gravimetric feeders, precisely because they do not include a weighing component. The downside, of course, is that they never truly measure the product and are therefore, typically, less accurate. For many types of volumetric feeders, variables such as density, product size, or even product temperature are assumed to be constant. When changes in moisture content, environmental temperature, or even changes in the process itself begin to affect the product’s density, then the accuracy of any feeder that is feeding based on volume will begin to wander. 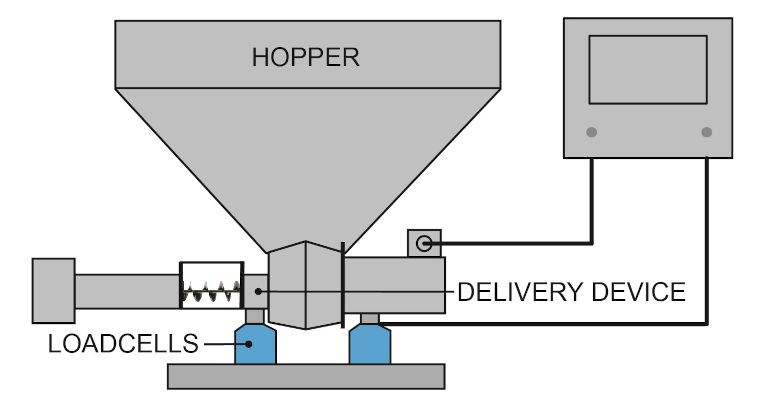 A loss-in-weight feeder typically contains a delivery device, a hopper that holds an amount of product, a weighing mechanism, and a closed-loop controller.

Loss-in-weight feeders typically consist of a delivery device--usually a screw or auger--a hopper that holds an amount of the product to be fed, and a weighing mechanism--usually, a set of loadcells--that weighs the auger and hopper as material passes from it. As product exits the feeder, the change in the weight of the system, or the loss-in-weight, is measured. Over time, this loss-in-weight is extrapolated as rate, and the speed of the delivery device is modulated to maintain the desired rate. The weight can also be totalized over time for filling or batching applications.

Intrinsic to the design of loss-in-weight feeders is their ability to simultaneously measure large amounts of weight--the weight of an entire feeder system filled with product--as well as small, incremental changes in that weight, which represent the flow rate of your product. When the difference in magnitude between the overall system weight and the loss-in-weight is relatively small, a loss-in-weight system can be quite accurate. The scale’s resolution, however, is much more of an issue as the differential between the system weight and the loss-in-weight widens, because as it widens, the measurement error that is based on the loadcell’s resolution will increase as well.

Conventional wisdom, then, would suggest that you would want the product hopper to be as small as possible to ensure that the differential between system weight and “loss-in-weight” was as small as possible. As the hopper size decreases though, another concern arises, especially for longer batches/fills or for continuous processes. What happens when the hopper is empty? Obviously, it will have to be filled. While the hopper is filling, however, the loss-in-weight feeder can no longer continue to feed gravimetrically. The feeder must either continue with a constant speed near the desired set point--thus becoming a volumetric feeder--or the flow rate is drastically reduced during the re-filling of the hopper, to minimize error due to the refilling process. These “blind spots” in production can cause serious feed disruptions which can result in off blends, errant fills, or even wasted product. 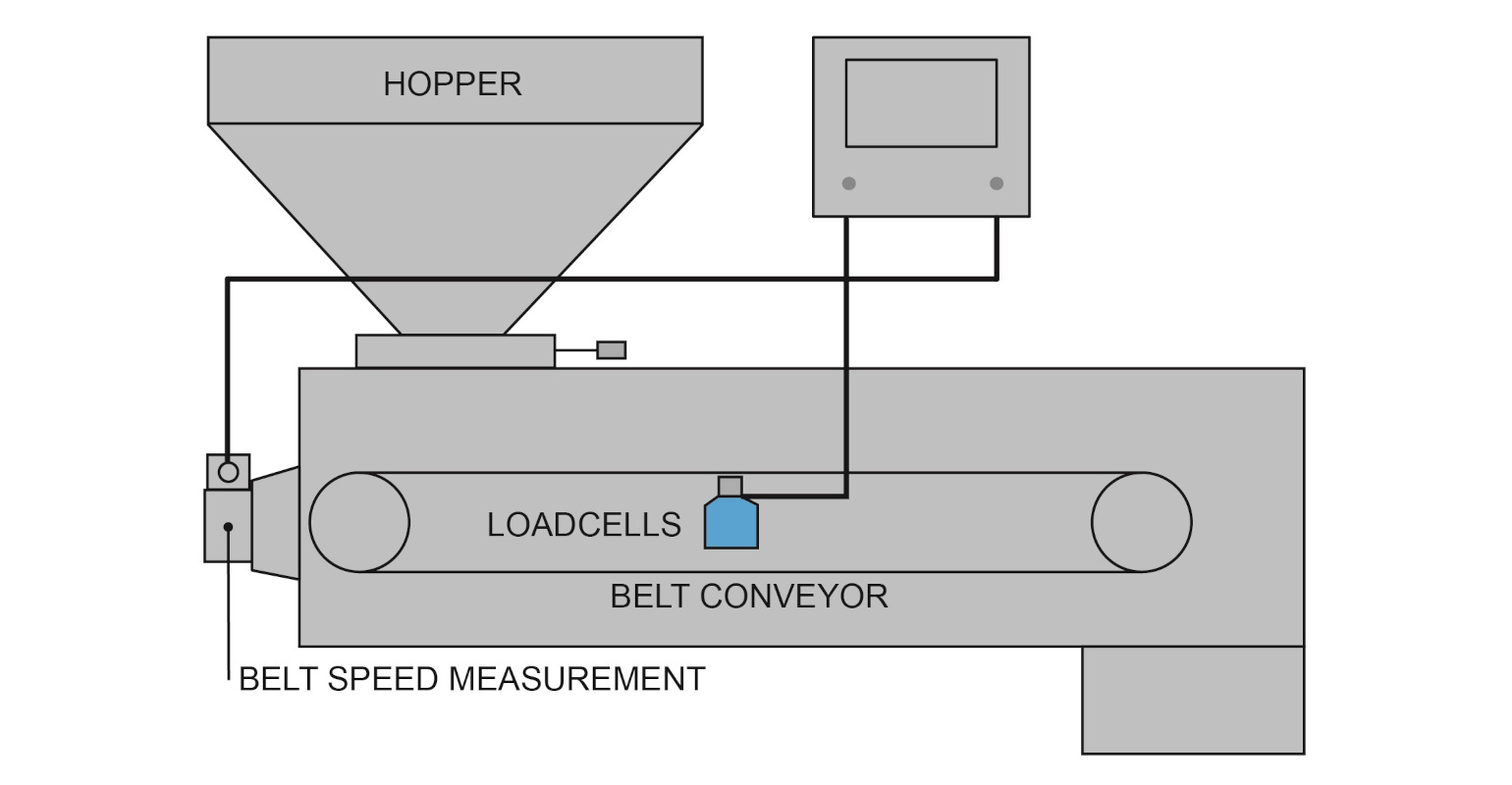 A weigh belt typically consists of a belt conveyor and a feed delivery system, typically a hopper and a closed loop controller.

While weigh belts do not employ the loss-in-weight method to measure the flow rate and total of products, they do have a section of their belt conveyor on loadcells. Because they are simultaneously weighing both the belt conveyor system and the product that is passing through it, they will have similar restrictions as the loss-in-weight feeder regarding scale resolution. Moreover, product collecting on the rollers and other key components can alter its measurement capabilities, thereby shifting its accuracy. Another byproduct of the weigh belt being on loadcells is that several seconds--or longer, depending on belt speed--of material is weighed at once. In doing so, the flow rate signal will, by design, be averaged. Over the long term, this averaging may not cause a great deal of inaccuracy, but for short batches or blends, the inaccuracies can be devastating. 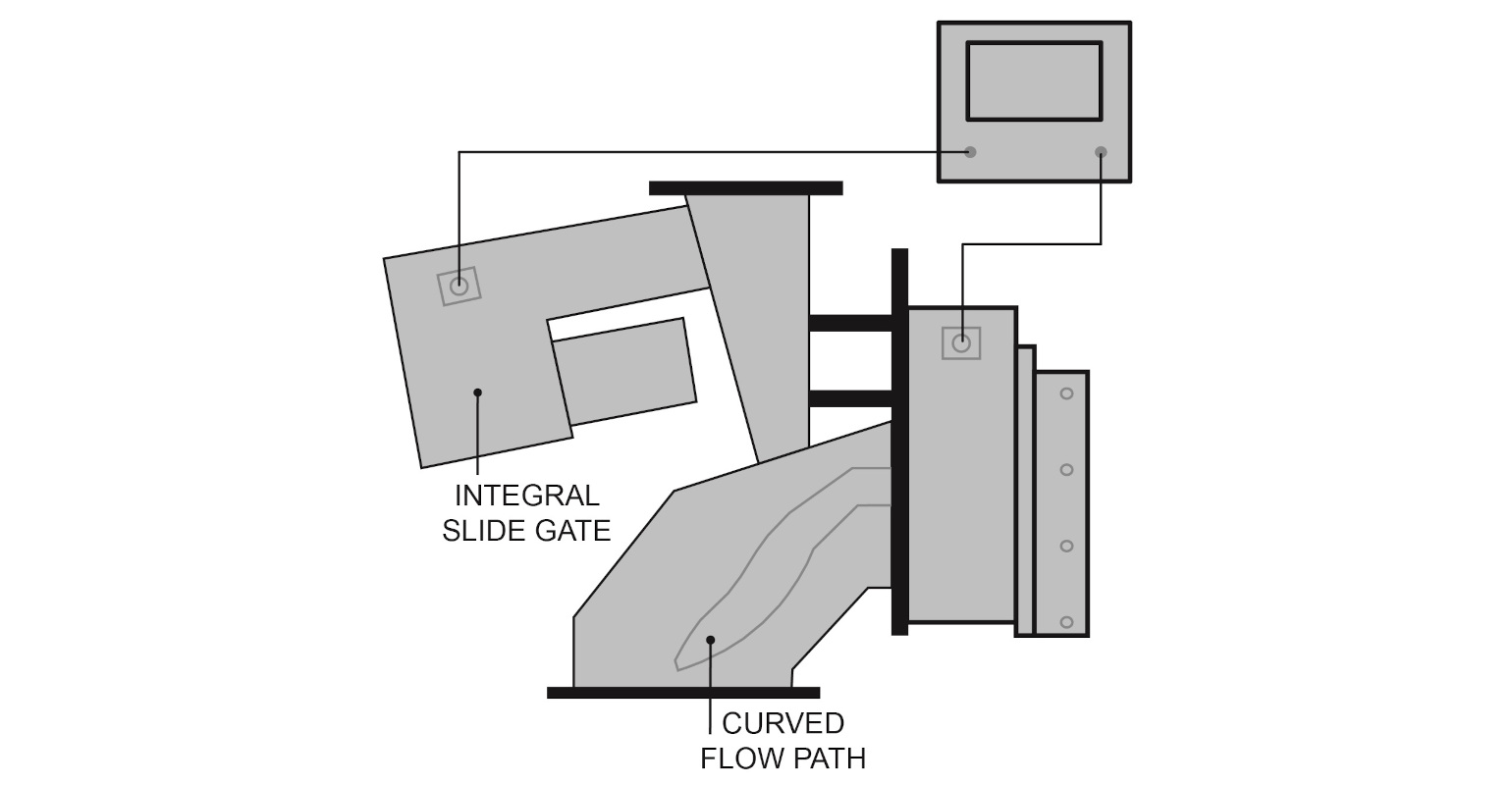 A centripetal force-based feeder works by integrating a curved path flow measurement device with a control device such as a control gate, vibratory conveyor, etc., into a single, multi-functioning feeder.

A centripetal force-based feeder works by integrating a flow measurement device with a control device such as a control gate, vibratory conveyor, or other device, into a single, multi-functioning feeder. After product flows through the control device portion of the feeder, it flows through the flow measurement portion, where it is forced around a curved flow path. This movement generates a centripetal force which is equivalent to the mass flow of the product. The feeder incorporates this mass flow signal into a closed loop system where the flow rate can be modulated to maintain a flow rate and to start and stop flow based on a total set point.

Another benefit of the centripetal force-based feeder’s measurement technique is that they typically do not require an additional hopper or holding tank. That means they can generally be installed directly after existing bins, storage tanks or silos without any need for additional vertical space. Because centripetal force-based feeders can be installed directly after existing storage containers, it means that the stack up requirements for these types of feeders is typically, exceedingly small. Furthermore, since the feeding tank or bin is not on loadcells, the gravimetric measurement of the product will continue whether the bin or silo is currently being refilled or not.

What Feeder is Right for Me?

In summary, then, for feed applications where accuracy may not be as important as the cost during the selection of a feed device, then a volumetric feeder is an economically sound solution, especially for more uniform and consistent products that would not see significant changes in product characteristics such as density, size, or shape. If, however, accuracy is important, then gravimetric feeders are certainly the more accurate and dependable solution. Loss-in-weight feeders and weigh belts have traditionally been the go-to option in gravimetric feeding, and they can prove to be accurate in specific situations and circumstances.  An alternative, however, is a relatively new type of feeder called the centripetal force-based feeder, which performs accurately in nearly all the same situations as both loss-in-weight feeders and weigh scales but will also perform accurately in many situations where loss-in-weight feeders and weigh scales will not. If you are looking for a feeder and have misgivings about the traditional offerings, or would maybe like to try something different, perhaps a centripetal force-based feeder is right for your application.