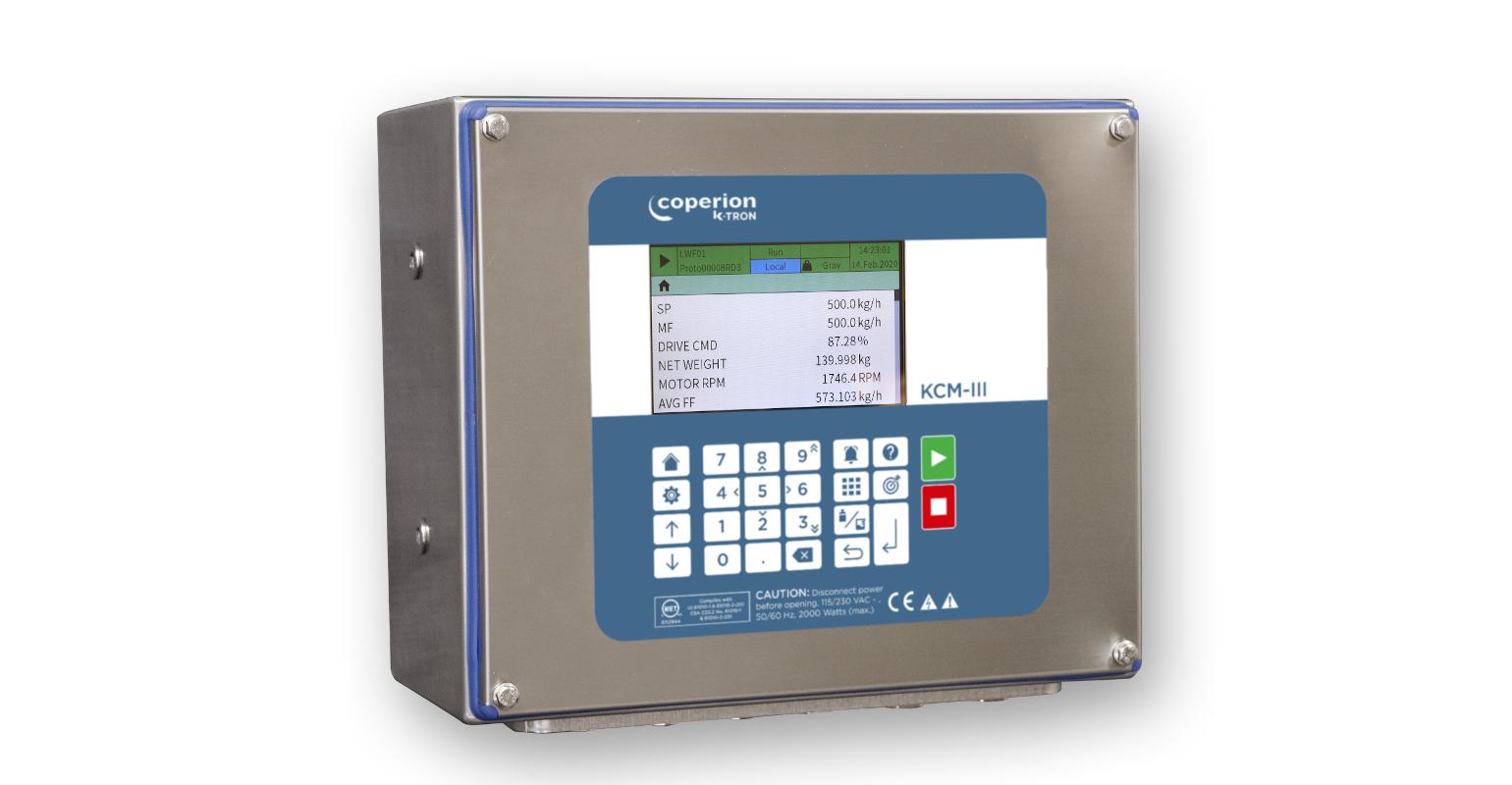 The redesigned KCM-III has a variety of new features, including a larger 5-in. LCD screen with an improved user interface, context-sensitive help, stainless steel enclosure, and built-in Ethernet capability with optional Wi-Fi.

With Ethernet capability (wired or wireless), the KCM-III can be accessed via a user-friendly feeder web page that includes a full-feature user interface. In addition, the KCM-III is ready for Internet 4.0 functions such as predictive maintenance, electronic service options, overall equipment effectiveness, outlier detection, machine optimization, and much more.

The KCM-III controller combines the motor drive and control modules of a feeder and its ancillary components into one component and is generally mounted directly at the feeder, pre-wired and pre-tested at the factory. All motor setup, diagnostics, and operator interface functions are integrated into the KCM-III user interface. Each KCM-III includes a complete software package to support a wide variety of application types, both batch and continuous, from loss-in-weight feeders to weigh belt feeders to Smart flow meters. The KCM-III controller is rated for ATEX 3D environments and listed for NEC Class II Div. 2 hazardous areas.

The KCM-III also features a completely new, powerful CPU with extended memory to allow for the storage of more log and event files, trace and process data. Seven days of traceability are included as standard but extended traceability is available as part of an optional software bundle. Improved control algorithms provide faster communication with the feeder drive, weighing system, and auxiliary equipment and result in more precise control of the system. In combination with the latest generation of SFT (Smart Force Transducer) load cells (released in 2019) the KCM-III offers a higher weighing resolution – 8,000,000:1 in 20 ms. Together this results in better short-term feeding accuracy as the controller reacts quickly to changes in the system. In addition to built-in flash memory the KCM-III stores all key files on a micro-SD memory card. The data files are all PC-readable, making downloading or updating files simple. Files are accessible via Web, Wi-Fi, FTP, USB flash drives, or offline via the micro-SD card.

Expanded Connectivity for More Control Options
KCM-III controllers equipped with the optional Wi-Fi Gateway create their own local area network. This Wi-Fi access point allows an operator with the proper login credentials to access any or all connected KCM-III controllers using a phone, tablet, laptop, or other mobile device to control the feeder remotely, check its status, or access files. The KCM-III uses multi-factor security methods to ensure no unintended access occurs over Ethernet or Wi-Fi. In addition, USB ports are provided for easy connections to flash drives or laptops to transfer files, perform diagnostics, or update software. Connectivity to customer PLC and DCS systems is provided via a KCM-III host port communications module available in the widely used Profinet and Ethernet/IP protocols, as well as others.

The KCM-III currently supports over a dozen languages, including graphical languages such as Japanese, Chinese, and Korean. The keypad features modern user-friendly and language-independent icons.

“With our newest controller generation we have built the foundation for the digital future of our Coperion K-Tron feeders,” said Franz Neuner, director of product management, Equipment & Systems Div. at Coperion. “The improved graphical user interface and all-new programming make the KCM-III easier to use and the expanded connectivity options give the user more options for controlling their process. With this new technology we will be able to expand into future areas such as artificial intelligence and preventive maintenance, helping manufacturers make their processes more efficient.”