'A Disneyland of Dust': Why NASA Researches Particulates 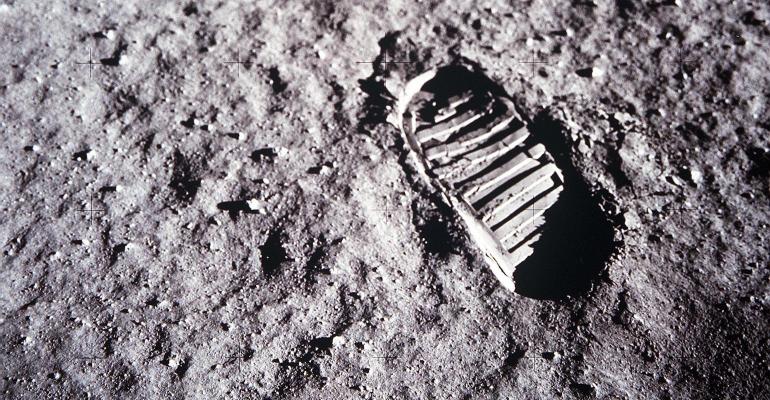 Scientists and engineers at the National Aeronautics and Space Administration (NASA) have conducted research on particulate materials and dust collection for decades, from gathering dust on the surface of the moon to collecting tiny fragments of asteroids, comets, and man-made objects.

America’s space agency commits resources to the examination of space dusts to expand our knowledge of the origins of the solar system and the composition of celestial objects, as well as develop an understanding of risks these materials pose to humans in space.

Powder & Bulk Solids provides some highlights of the research on particulate materials and dust collection technology that NASA has conducted, stretching back to the Apollo program in the 1960s.

NASA turned its gaze to extraterrestrial particulates during the Apollo lunar landing missions. Part of the agency’s work during the program focused on collecting samples of the powder-like substance covering the moon’s surface for scientific examination. But NASA also had to start looking at moon dust as a hazard to its personnel and assets after astronauts who took part in the landings reported numerous challenges created by the abrasive, highly adhesive material.

Apollo 11 astronaut Buzz Aldrin dubbed the moon “a Disneyland of dust,” where “the more time you spend there, the more you get covered from helmet to boots.”

The insidious gray dust has an electrostatic charge, meaning it clings to nearly everything – spacesuits, the lunar rover, metal equipment. It caused false readings on instruments, clogged or jammed equipment and mechanisms, and led to thermal issues in the lander. The particulate’s distinctive shape also made it very abrasive, causing wear on spacesuits and other man-made items brought from Earth. Surface dust was also kicked up when astronauts would land or take off from the moon, obscuring their vision during a dangerous maneuver.

“I think dust is probably one of our greatest inhibitors to a nominal operation on the moon,” Apollo 17 commander Gene Cernan told NASA officials during a technical debriefing, according to a Space.com report. “I think we can overcome other physiological or physical or mechanical problems except dust." 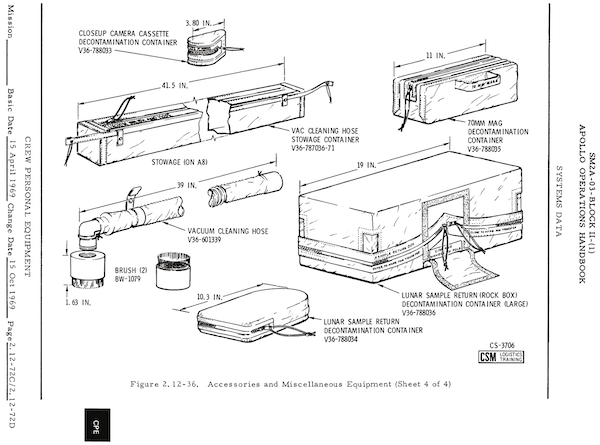 A drawing detailing the vacuum decontamination system in the Apollo command modules (CMs).

One way NASA tried to combat the dust problem was by building a vacuum cleaner into the Command Module (CM) to decontaminate the spacecraft and the items it held.

“Although some loose dust did migrate with the crew and their precious samples, the qualities were slight in comparison. The Command Module itself would be dusted and vacuumed several times during the return trip,” a document published by the space agency states. “The crew also found that weightless dust was not a great danger after all. The life support system drew the cabin air into the lithium hydroxide filters for carbon dioxide removal, and it was these filters that most likely caught the majority of loose dust as well.”

Even though the US ceased its missions to the moon in the 1970s, researchers and engineers have continued to look at the impact of dust on space exploration, particularly in the context of inhabitation of the moon or planets with dusty surfaces like Mars. While American astronauts were able to effectively contend with dust during their short visits to the lunar surface, some observers warn that significant resources must be devoted to dust mitigation to enable humans to remain in the harsh environments for the long-term.

“Dust will probably never be eliminated as an engineering or operational issue, and dust mitigation strategies will need to be innovative and continuously applied. Space suit design, if feasible, should include continuous rejection of dust from fabric, bearings, and other working components,” geologist and former astronaut Harrison Schmitt wrote in “Return to the Moon.” “Habitats and other pressurized facilities will require air locks also to be dust locks in which dust brought from outside is contained and removed.”

From Operational Issues to the Origins of the Solar System

As the Apollo program came to an end, the agency started to conduct other types of research on particulates. During the late 1970s, NASA’s Ames Research Center in Mountain View, CA outfitted a U-2 aircraft – known for its use in top secret flights high above the Soviet Union – with adhesive plates to capture particles at a high altitude. The New York Times reported that an analysis of samples from the research flight by researchers at Cal Tech and University of Washington revealed “chemical peculiarities” that suggested there were traces of nuclear reactions that took place at the start of the solar system’s development. Results of the research were published in the journal Science.

Other types of aircraft were used for this purpose during the early 1980s. NASA opened the Cosmic Dust Laboratory in 1981 to store samples gathered during its missions and distribute them to researchers across the globe.

To collect dust samples from further out in space, NASA started installing dust collection and analysis equipment onto satellites. For 20 years, the Cassini spacecraft carried a Cosmic Dust Analyzer (CDA) that could report the speed, charge, size, and direction of movement of particles that collided with the instrument in space. Scientists examined the data to glean information about the source of the dusts and their interactions with the rings, moons, and magnetosphere of Saturn. 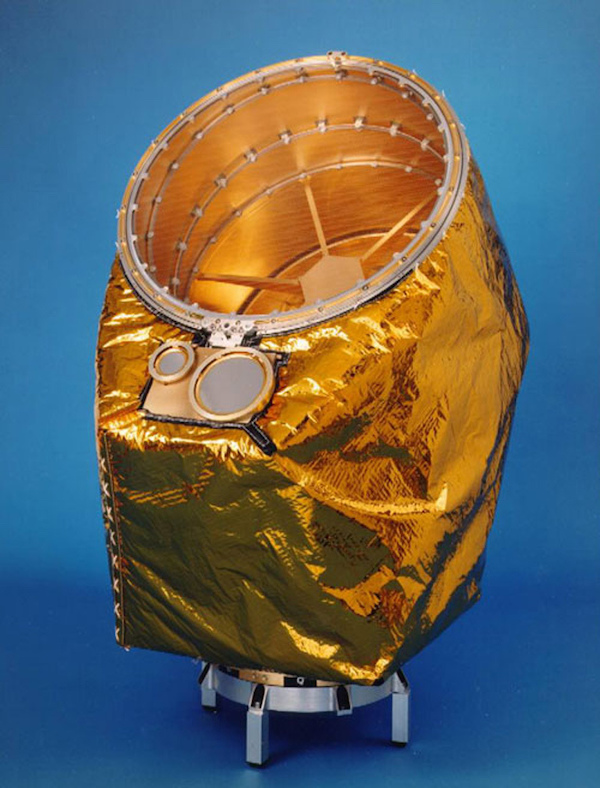 The Stardust spacecraft, launched in 1999, included a specially designed dust collector to capture material while flying through space. Rows of microporous silica aerogel blocks were mounted on two sides of an array connected to the satellite’s Sample Return Capsule. After collecting dust from the comet Wild-2, the array retracted inside the capsule and returned to Earth, landing in the Utah desert in January 2006. The achievement represented the completion of the first deep-space mission to return a sample of material from a celestial body.

“We were investigating big questions with the smallest samples – how did our solar system form? What are we made of?” Eileen Stansbury, chief scientist at Johnson Space Center who worked on the Stardust mission, said in a NASA release announcing the 10th anniversary of the capsule’s landing. “This comet is representative of one of the most primitive bodies in the solar system, preserving the earliest record of material from the nebula during the ‘planetesimal’ forming stage in its evolution.” 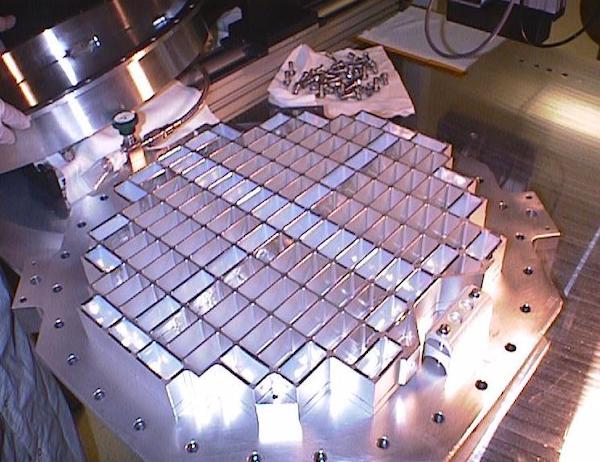 The dust collector array with aerogel media used aboard the Stardust spacecraft.

Before work started on the International Space Station in the 1990s, NASA proposed the construction of another Low Earth Orbit (LEO) outpost called Space Station Freedom in the 1980s. NASA researchers published several papers in the late 1980s and early 1990s calling for the addition of a permanent “Cosmic Dust Collection Facility” (CDCF) in the project.

A paper presented at the Orbital Debris Conference in April 1990 said the CDCF “will serve as a long-term observatory of all dust-sized particles, typically << 1mm, either natural or man-made.” The authors, NASA Johnson Space Center researchers Friedrich Hörz and Dennis Grounds, stated that the facility should feature instruments that “measure the trajectories of individual hypervelocity particles and will trap the fragmented, melted or vaporized impactor residues in suitable capture media.” 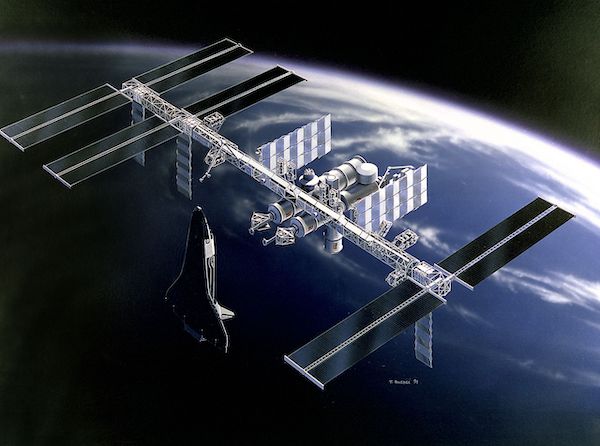 An artists rendering of the planned Space Station Freedom from 1991.

Dust samples from the CFCF would have been transported to Earth for analysis. The paper suggested that testing the material could offer scientists information on comets and asteroids followed through space and the sources of man-made particulates. “Direct measurement of the dynamic properties of all particles will contribute substantially towards an understanding of the collisional hazards to current and future space operations in Low Earth Orbit,” opined Hörz and Grounds. In other words, the authors posit that the ability to continuously monitor dust could help NASA and other space agencies to develop more knowledge of materials that could strike space stations and spacecraft in LEO.

Interest in interplanetary exploration perked up in 1990s into the early 2000s as NASA launched its Mars Exploration Program and private space travel companies like Elon Musk’s SpaceX and Jeff Bezos’ Blue Origin were formed with the aim of furthering space colonization. As part of the push, the agency continues to conduct research on particulate materials, including simulated Lunar and Martian dust.

NASA carries out dust-related studies at many of its locations. Johnson Space Center (JSC) in Houston currently houses facilities specifically used for dust testing to improve the performance and resilience of technology used in spacecraft, space stations and train astronauts for future missions to planets and moons. 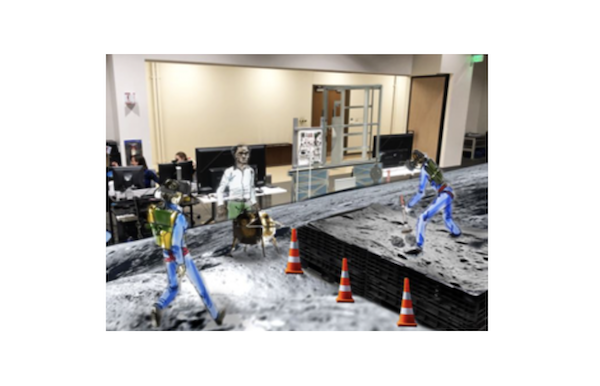 A view of the Geology/Science Simulation Environment at NASA's Johnson Space Center.

The agency’s location also contains a range of dust testing capabilities at JSC. A “flow rig” at the site is used to test air filter performance with various types of dusts. Seven abrasion wear testers are utilized in the JSC Advanced Materials Lab, as well as a glovebox for dust testing and a dry cleaner tumbler for examining regolith simulant.

To boldly go where no man has gone before, humankind needs a robust understanding of particulate materials – from the hazards they create to the benefits they can offer. The technical expertise of the powder and bulk solids industry will surely play a major role in future space missions.