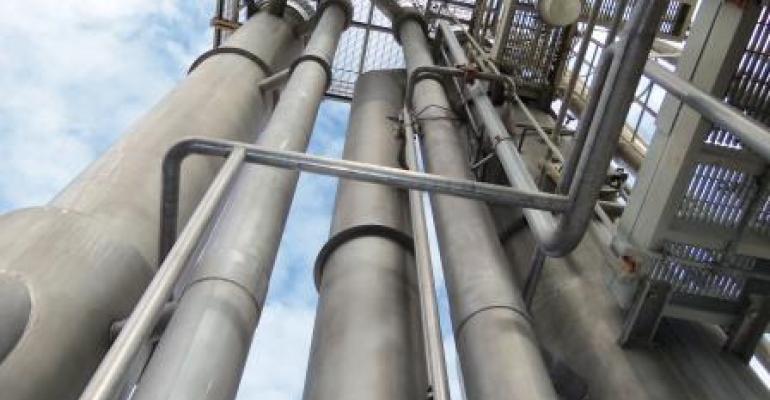 A dairy client approached Caloris for help improving its operation and reliability, as well as increasing the capacity of its 25-year-old spray drying plant.

Caloris’ first step was to perform a detailed analysis of the current operation and create a mass balance for the plant. This allowed Caloris to clearly identify bottlenecks and the theoretical maximum capacity of the plant.
Caloris studied the momentary process operation and production rates, as well as the weekly production requirement to understand the overall equipment effectiveness (OEE) of the plant.

This evaluation focused on a multi-effect TVR evaporator to condense skimmed milk to 50% total solids and a spray dryer to produce non-fat dry milk powder from the condensed skimmed milk. The spray dryer was fed with a rotary atomizer, and had cyclones and a bag filter after the drying chamber.

The plant was found to be operating below its original design capacity, with an opportunity to produce additional capacity based on modern operating standards. After review with the client to understand its needs, goals, and the economics surrounding the opportunity, Caloris put forward a comprehensive and phased solution to allow the client to confidently step-up its capacity, while at the same time easing its operation

Step 1: Spray Dryer Operation
The spray dryer was found to be the primary production restriction and was the focus of the debottlenecking effort. The evaporator was found to be operating well, but the daily CIP cleaning cycle seemed to be taking longer than expected and needed to be investigated.

The main issue with the spray dryer was found to be severely restricted process airflow. The supply fan was running on a speed drive at 75% speed, while the exhaust fan was running at 100% trying to balance the drying chamber pressure. With original design data available, and checking airflow by both pitot measurements and against fan curves, it was assessed that the spray dryer was operating at a 30% reduced airflow when compared to the original design.

There were three significant causes contributing to the reduced airflow and limiting production capacity:
1. Original baghouse design with a low air-to-cloth ratio
2. Fabric/cloth choice for the baghouse bags
3. High pressure drops in other areas of the process

The baghouse was targeted as the key bottleneck. Looking at the original manufacturers design, the air-to-cloth ratio was found to be extremely high -- about 40 percent above the usual standard. This provided acceptable production rates when the baghouse bags were new, but within a month of changing all the baghouse bags, the process airflow became restricted and the production rates quickly diminished. This was compounded by a plant that experienced high humidity environments in the summer.

Further, during inspection it was found -- and confirmed by discussions with the operations staff -- that 6% of the bag locations were blanked off during the original commissioning 25 years prior because the bags were quickly developing holes due to abrasion from the product. This reduction in baghouse bags further restricted the airflow and limited production.

To relieve the issue of air-to-cloth ratio restricting the process airflow, Caloris recommended and the client implemented using longer bags and cages. This created an extra 17% in cloth area, directly allowing the pressure drop to be reduced and the airflow to be increased. This led to a direct increase in production rate for the plant when it was implemented.

The blanked off bags were not changed at the time this was written. This will be assessed in the future and evaluated if full or partial length bags can be installed for creating additional cloth area.

The next step was to assess the baghouse bags, their fabric, and construction. Baghouse bags are critical to the reliable operation of the plant and compliance with environmental permitting. Many variants and coatings will work fine for the first month or two of operation, but they need to retain their ability to release product for 9-12 months of typical operation between changes. Operational data showed that this plant would run closer to its design capacity for the first month, but quickly diminish to the reduced state in which we observed it operating.

To assess the fabric, a sample of the current bags was sent to a laboratory. A spray dryer, with its high temperature, high humidity, and complex, potentially sticky product, is a difficult application for baghouse fabrics and needs to be assessed carefully. The usual go-to fabrics and coatings like Gore-Tex and PTFE need to be of the highest quality and need to be applied correctly to the fabrics. Many lesser quality, lower cost alternative have entered the market, and although satisfactory for less rigorous application, these have reduced results in a spray drying application. Often bag vendors may suggest lighter weight fabrics to reduce pressure drop, but bags will inevitably wear through and break sooner, either leading to earlier maintenance or environmental issues. Bags need to be constructed and sewn correctly to last the duration of what is generally an annual replacement cycle.

Caloris worked in partnership with a leader in the bag and fabric industry to assess the current baghouse bags and make a recommendation. It was found that although the bags included a PTFE coating, the bags failed several simple lab tests, indicating that they were not suited to a spray drying application. The fabric was found to be a lower weight than the 16-oz felt that is usually recommended. This was confirmed by the number of broken bags that were found when the baghouse was inspected.

Ultimately, a baghouse bag was recommended with a 16-oz polyester felt with a PTFE coating from a reputable supplier experienced in the dairy spray drying industry, with the objective that the process design airflow could be maintained for one full year under standard operating conditions and that a minimal number of bags were likely to experience premature wear. The bag was designed with features that addressed the wear seen at the tops and bottom of the bags. The bag and cage diameter were correctly matched for allowing the bag to be reverse-jet pulsed corrected.

Finally, in a general inspection of the plant, it was found that the air-to-air heat recovery system after the baghouse had become restricted with product due to the sheer number of broken bags. When the bags were changed to a more robust design and the heat recovery system was cleaned, it was found that this cleaning alone also led to a reduction in pressure drop which allowed for five percent increase in airflow and, therefore, production rate. This re-enforced that inspection and maintenance continued to be a key to the ideal operation of the plant.

These three areas of focus on the spray dryer allowed the system to return to design capacity on an hour-by-hour basis.

Step 2: Evaporator Operation
The focus now shifted to the issues that were related to day-to-day capacity. As mentioned, the daily evaporator CIP was taking 70 percent longer than expected based on the current design. Both the equipment and control system were inspected. It was found that the physical system of tanks, pumps, pipes, and nozzles were working adequately and had been well maintained. It was found that the control system, with its HMI, including adjustable timers, had been adjusted to longer and longer times over the intervening years. These longer times became the new normal.
Caloris worked with the client to re-commission the daily evaporator CIP back to its original design conditions and parameters. This simple step created three hours more production time per 24-36-hour production cycle.

Modern plants can be designed for 24-hour operation with multiple evaporators and multiple dryer feed systems to allow the dryer to operate continuously for many days without shutting down. This maximizes the utilization of the plant assets, as well as minimizing dryer start-ups and shut-downs, which are often the causes of production issues and upsets.

In this plant, the evaporator needed to be CIP cleaned after 20 hours and the dryer feed system would be cleaned at the same time. This process took four hours per day. Caloris evaluated the existing evaporator and developed a design to de-couple the operation of the evaporator and spray dryer.

The new operational scheme involved having the existing evaporator produce condensed milk up to 42 percent total solids (instead of 50 percent) at a new higher rate for 20 hours per day, while still undertaking daily CIP cleaning. Caloris provided new condensed milk storage silos that would allow the evaporator to run faster and get ahead of the spray dryer.

Caloris then provided two new finishers that could be used alternated to feed the spray dryer. Finally, the spray dryer feed system was rebuilt to match the finishers, such that there would be two dryer feed systems that would be alternated every 20 hours, thereby allowing the dryer to run continuously. At the same time, the opportunity was used to switch the spray dryer from rotary atomization to nozzle atomization. The dryer would run on six nozzles, but would have 12 nozzles installed in the air disperser, allowing for six to operate and six to be CIP cleaned at a time.

The alternating operation of the dual finishers and dual dryer feed system allowed the plant to move from 20 hours per day of operation to 24-hour continuous operation. This added 20 percent daily plant throughput without major changes to the evaporator and spray dryer, adding only a dual finisher and dual-dryer feed system.

Effective Homogenization and Densification of Powders of Differing Densities
Jan 19, 2023

Radio Frequency Heating and Drying: The Wave of the Future
Jan 04, 2023