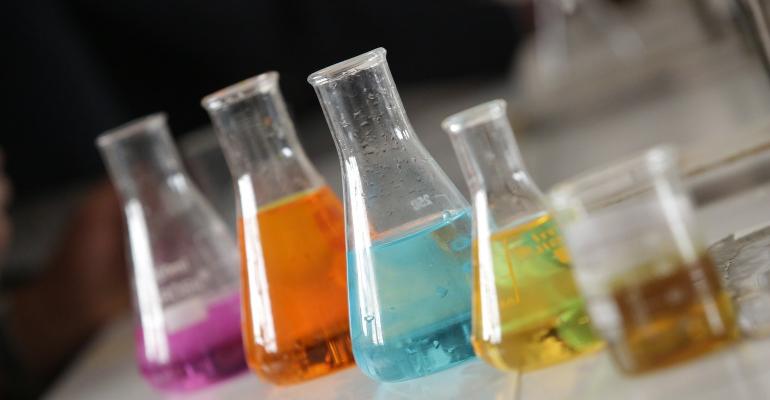 Fires at several facilities and some major capital projects captured headlines during the month of September, as well as a few high-profile acquisitions. One chemical manufacturing firm was issued a $1.3 million following the death of a worker in an explosion. Powder & Bulk Solids editors selected these posts to provide our audience with an overview of some of the most interesting chemical industry-related developments that were reported in the last month.

Chemicals manufacturer Huntsman Corp. announced last month that its Performance Products division wrapped up work on the initial phases of a project at its Conroe, TX facility to expand production of specialty amines. The investment will expand capacity of the firm’s E-GRADE brand of specialty amines, including quaternary amine alternatives to tetramethylammonium hydroxide (TMAH) and related products. The products are used by the semiconductor industry.

Crews from about a dozen area fire departments were called to a blaze on Sept. 18 at the Vantage Chemicals plant in Gurnee, IL, according to coverage in the Lake & McHenry County Scanner. One worker who tried to douse the fire received treatment for exhaustion, LMCS said. Vantage’s site in Gurnee manufactures products to support its Performance Materials business, which is also headquartered at the site.

American chemical maker Eastman Chemical Co. announced in mid-September that it entered into an agreement to purchase the business and assets of performance films manufacturer and marketer Matrix Films LLC, including its PremiumShield brand and line of automotive film patterns. The transaction will enable Eastman to expand its paint protection film development capabilities, pattern database, and installation training expertise. Matrix Films also complements the firm’s automotive dealer base in North America, Europe, and the Middle East, fostering growth in window films and paint protection films.

Chemical manufacturer Briar Chemicals Ltd. faces a £1 million fine (about $1.3 million) after a worker died in an explosion at its facility in Norwich, England, according to a release issued last month by Great Britain’s occupational safety regulator, The Health & Safety Executive (HSE). 46-year-old maintenance contractor Rob Cranston was repairing a mixing vessel during a planned maintenance shutdown on July 27, 2018. Officials believe that flammable Toluene vapor was accidentally ignited by the man’s welding torch or a grinder.

Footwear manufacturer Crocs announced this week that it will reach a major milestone in its effort to reduce the carbon footprint of its products with the help of chemicals and materials firm Dow. The shoe supplier aims to lower its carbon footprint by incorporating Croslite, a new bio-based sustainable polymer made by Dow, into its products. Based on the chemical maker’s ECOLIBRIUM technology, the material is made from renewable bio-based feedstocks that lowers the product’s carbon footprint and enables old shoes to be recycled. Crocs will be the first footwear brand to enter the market with products that include the material.

Linde Plans to Expand Capacity at Air Separation Plant in US

Industrial gases supplier Linde revealed plans in September for a capacity expansion project at its Mims, FL air separation plant to meet rising demand across a range of industries. During the effort, the company will increase production at the location by some 50% to serve its contracted customers in a variety of end markets, including food processing, manufacturing, water treatment, and aerospace.

Differentiated and specialty chemicals manufacturer Huntsman Corp. plans to launch a “multi-million” dollar expansion project at its Petfurdo, Hungary production facility to boost the site’s capacity for polyurethane catalysts and specialty amines. The firm said the effort will allow the plant to operate with greater flexibility and increase its ability to provide innovative products to customers in the polyurethane, coatings, metalworking, and electronics industries.

Specialty materials firm Ashland announced in early September that it entered into a deal to sell its Performance Adhesives business to Arkema for $1.65 billion in cash. The company said it is selling the unit to focus on its additives and ingredients portfolio. The Performance Adhesives business has generated an estimated $360 million in sales in 2021. It is a major player in the US pressure-sensitive adhesives market, including decorative, protection, and signage films for automotive and building applications. Arkema’s unit is also a prominent supplier of structural adhesives and flexible packaging adhesives in the US. The business currently operates six manufacturing plants.

Specialty chemicals and materials manufacturer Arkema is preparing to part ways with its epoxides business to American agribusiness Cargill in a $38.8 million transaction. The company said the unit, part of its Hydrogen Peroxide activities, “has limited integration” with the rest of its portfolio. The sale is expected to offer Cargill an opportunity for growth in industrial markets.