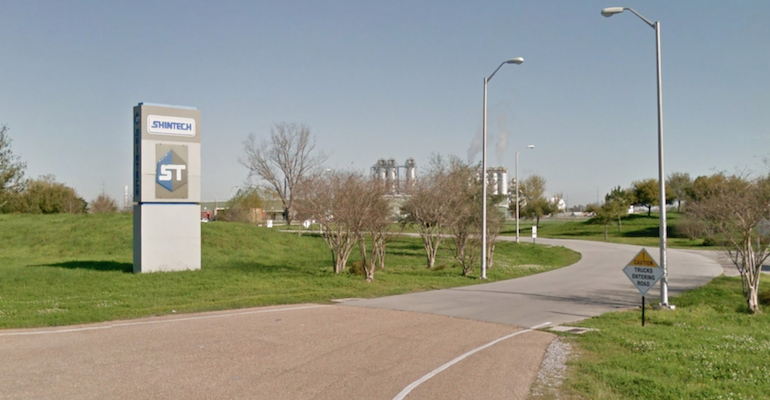 A view of the Shintech manufacturing complex in Plaquemine, LA.
A lightning strike reportedly ignited an electrical fire in the firm’s Plaquemine, LA production facility.

A lighting strike is being eyed as the cause of a small fire that broke out Friday evening at the Shintech polyvinyl chloride (PVC) manufacturing complex in Plaquemine, LA, several local news organizations reported.

“A lightning strike caused a transformer fire at Shintech’s facility in Plaquemine. Onesite emergency teams are responding to the fire, which is isolated to one area of the facility,” Danny Cedotal, vice president of manufacturing for Shintech told television news station WAFB.

The company said it is shutting down production units at the Louisiana site to gauge how weather will impact the facility. Tropical Storm Elsa has led to rainstorms and high winds along the Gulf Coast.

No injuries were documented during the incident, according to The Baton Rouge Advocate.

Officials with the Iberville Parish Sheriff’s Office said in coverage by BRProud.com that lighting contacted the facility, igniting an electrical fire.

In January, Powder & Bulk Solids reported that Shintech revealed plans for a $1.3 billion expansion project at its manufacturing and packaging facilities in Plaquemine and Addis in Louisiana.