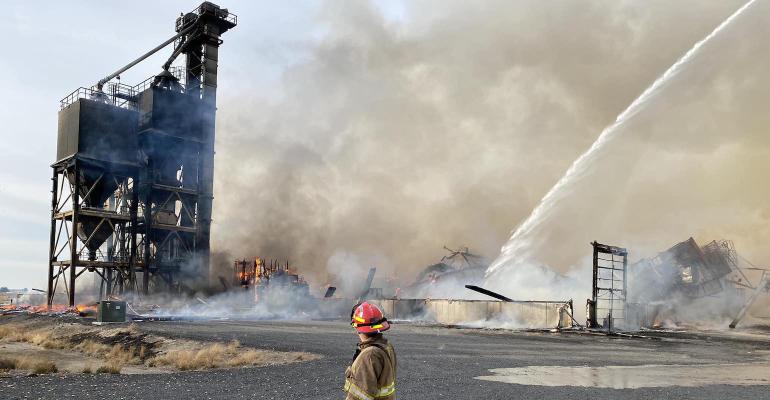 A massive fire ignited at the Wilbur-Ellis fertilizer manufacturing and blending plant near Moses Lake, WA Sunday, leaving the facility in ruins and forcing some residents living near the location to shelter in place.

Emergency personnel were called to the site around 3:15 p.m., police told the Columbia Basin Herald. The plant was fully engulfed in flames when crews got on scene. Fire officials interviewed by the newspaper said the facility was built completely of wood because fertilizer erodes metal.

County public health officials urged certain groups of people living downwind of the fire – including those with respiratory conditions, children, and the elderly – to remain indoors until the flames were out due to concerns that the smoke may contain toxic chemicals. Occupants of homes within a one-mile radius of the plant were ordered to shelter in place during the incident.

A statement published by the Grant County Sheriff’s Office at 5:15 p.m. detailed that the plant collapsed and that fire crews were expected to remain on scene overnight to monitor the smoldering fire. No injuries were recorded.

The county fire marshal is launching an investigation into the cause of the blaze.