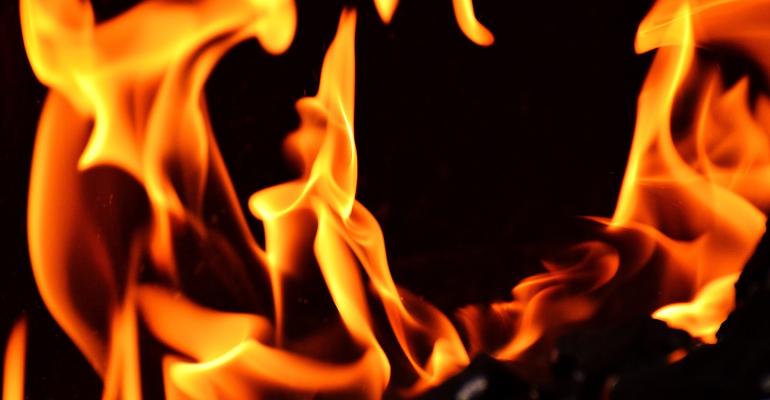 Firefighters were called to the CPI Products chemical plant in Walburg, TX on Thursday afternoon after a fire ignited at the facility, local news reports said. A shelter in place order was issued for several hours during the incident as officials assessed the potential environmental impacts.

Dispatched to the site around 4:30 pm, crews found the structure fully involved in flames upon arrival, coverage by NBC News affiliate KXAN said. Officials told the broadcaster that about 11 fire departments responded to the fire.

Shortly after arriving at the incident, emergency response officials ordered residents near the plant to remain indoors with windows and doors shut and turn off their heating and air conditioning systems. Officials lifted the shelter in place order around 8:30 pm, but crews remained on scene to douse hot spots, the Williamson County, TX Office of Emergency Management said in a tweet.

Environmental advocacy group Environment Texas issued a statement Thursday voicing concerns about the impacts of burning plastic on the air quality around the facility.

“Burning plastic can emit dangerous chemicals like volatile organic compounds, particulate matter, and heavy metals, which can be carcinogenic and harm the respiratory and immune systems,” Catherine Fraser, clean air associate for Environment Texas, wrote. “No one expects these disasters to happen in central Texas, but the reality is that plastics are everywhere. They’re in our pantries, our clothes, and even our drinking water – and when a plant catches fire, they’re in our air too. But it doesn’t have to be this way. We need to start asking bigger questions about why we allow the petrochemical industry to pollute our air in order to make plastic products that we often don’t need in the first place.”

The Texas Commission on Environmental Quality (TCEQ), the state’s environmental protection agency, dispatched personnel to the Walburg facility on Thursday night to observe the impacts of the fire and conduct air monitoring in the area.

“No immediate health concerns at ground level have been detected,” the TCEQ tweeted.

The cause of the fire remains under investigation. No injuries were logged during the incident. Reports said the structure was completely destroyed in the fire.

CPI Products specializes in rotational molding, a process in which powder polymers are heated in a rotating hollow metal mold to form products, metal fabrication, and aerial lift products, according to the company’s website. The Walburg plant produces aerial lift products like lift buckets, liners, and weather covers.