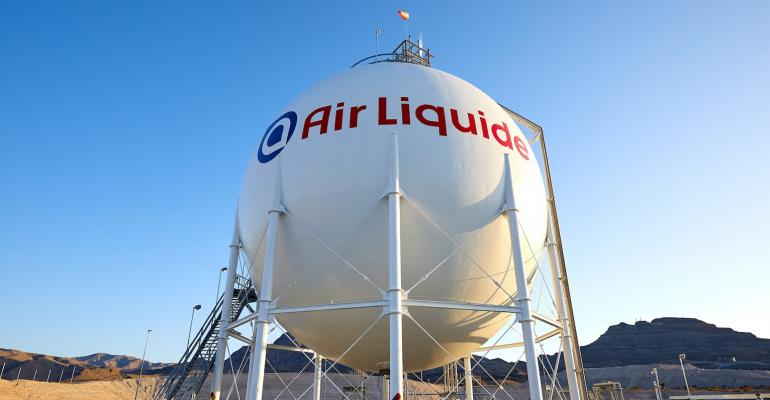 The $250 million site is the largest liquid hydrogen production and logistics infrastructure facility in the firm’s footprint.

Industrial gases supplier Air Liquide officially opened its largest liquid hydrogen production and logistics infrastructure facility in North Las Vegas, NV. The facility aims to supply the growing needs for hydrogen mobility, but will also allow to provide hydrogen to a wide array of industries while the mobility market continues to mature.

The facility, and the associated logistics infrastructure, marks a $250 million investment by Air Liquide in the US hydrogen market and will position Nevada as a leader in hydrogen energy production. Air Liquide’s investment created jobs for 700 contractors and 25 full-time jobs with the plant at full capacity. With this facility, Air Liquide also developed the infrastructure necessary to attract other companies to move into the area, creating additional jobs and new revenue for the city of North Las Vegas and the state of Nevada.

The North Las Vegas facility will produce 30 tn/day of liquid hydrogen which will be utilized by various customers, notably by those in the growing clean mobility market on the West Coast, especially California. The facility will be powered by fully renewable electricity. The facility can also use renewable natural gas to meet the California Low Carbon Fuel Standard (LCFS) when supplying the California mobility market. In this context, the facility can provide enough renewable hydrogen for over 40,000 fuel cell vehicles in California. This will significantly improve the hydrogen supply for mobility, a critical enabler for market growth. While the clean mobility market continues to mature, the plant configuration will also allow for the sale of hydrogen to a wide array of sectors with a range of renewable and low-carbon options for customers.

“Air Liquide has supported the clean mobility market on the west coast since its infancy and the North Las Vegas facility is a milestone in our decades-long leadership of the U.S. hydrogen market. This facility is an illustration of our commitment, and ability, to usher sustainable markets into the future, while creating jobs and fostering economic growth in the present,” said Michael Graff, Chairman & CEO of American Air Liquide Holdings, Inc. and Executive Vice President, Air Liquide Group, in a release. “By providing a reliable supply of hydrogen to California’s mobility market and the region’s industrial customers, we are making a significant investment in the transition towards a more sustainable future, one with hydrogen at its core.”

In alignment with Air Liquide’s Sustainability Objectives, the North Las Vegas liquid hydrogen production facility aims to accelerate hydrogen development and contribute to the Group’s goal of at least tripling hydrogen sales in order to reach nearly $6.5 billion by 2035.